Let’s talk turkey. We’ll examine some little known facts about the turkey to gobble up along with your Thanksgiving feast. 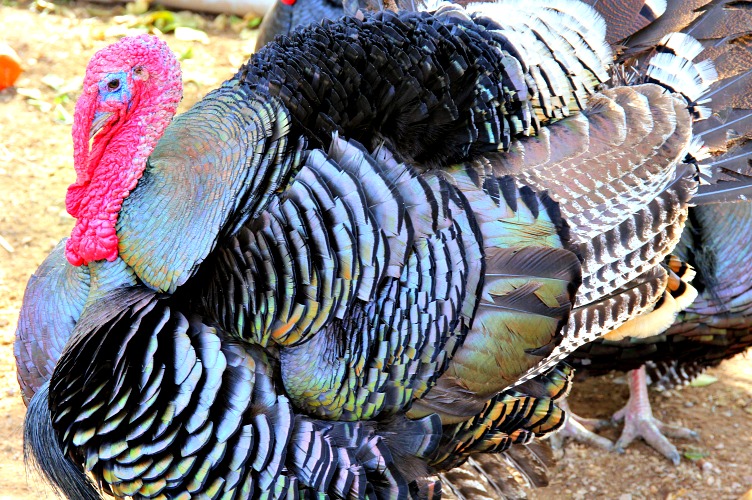 Today is my favorite holiday of the year.

No presents to buy.

And as Canadian Snowbirds we have the opportunity of celebrating Thanksgiving in October (Canadian Thanksgiving) and again today.

The only thing to spend is time with family, food, and football.

The Thanksgiving holiday is an opportune time to consider turkeydom—the wild stock and those top-heavy, farm-raised birds that are pardoned and spared from the dinner table each Thanksgiving by the President of the United States.

You know you’ll probably eat too much. But what do you really know about Thanksgiving? What do you know about the headliner of the day, Tom Turkey?

Wild Turkeys are native to North America, with some interesting historical and geographical twists along the way. The common turkey was tamed between 800 and 200 BC by the people of pre-Columbian Mexico. Up until about 1100 AD, the Pueblo peoples raised turkeys primarily for their feathers for use in rituals, ceremonies, and textiles.

Then in the 1500s, European explorers carried wild turkeys back to Europe, where the birds were further domesticated. When early English settlers brought turkeys to Eastern North America a century later, the species crossed the ocean once again.

Wild turkeys live in hardwood forests and marshlands. Equipped with powerful legs and clawed toes, they are adept at raking through leaf litter and moderate snow depths. Their broad diet includes over 600 types of fruits, nuts, waste grains, grasses, and insects. At night, Wild turkeys roost in trees for shelter and predator protection.

Appearance-wise, the Wild Turkey won’t win a beauty contest. Males have blue or gray featherless necks and heads that can shift color according to the bird’s emotional state. When angry or during courtship displays, the neck and head turn a radiant red. The male toms are the larger sex that boasts a spikey “beard” of feathers protruding from their mid-chest.

The snood is a fleshy flap that hangs from the beak; prominent bumps on the head and throat are termed carbuncles, while the wattles drape from under the chin. These physical characteristics are far more pronounced in domestic turkeys.

Most commercial turkey farmers breed their birds to have white feathers because white feathers leave no spots on the skin when plucked. Bred exclusively for the table, flightless domestic turkeys are 70 percent white meat and 30 percent dark meat. This differs from their wild relatives, whose breast flesh is darker due to their active flight habits.

The two types of meat differ nutritionally. White meat has fewer calories and less fat than dark meat. The rich flavor of dark meat is especially valued in soup and stew recipes. Dark meat holds up well in rich marinades and is a perfect choice for grilling and barbecuing.

Benjamin Franklin, who proposed the turkey as the official United States’ bird, was dismayed when the bald eagle was chosen over the turkey. Franklin wrote to his daughter, referring to the eagle’s “bad moral character,” saying, “I wish the bald eagle had not been chosen as the representative of our country! The turkey is a much more respectable bird, and withal a true original native of America.”

President Abraham Lincoln proclaimed Thanksgiving a national holiday in 1863, supposedly as a response to a campaign organized by magazine editor Sara Joseph Hale. In 1939, President Franklin Roosevelt moved Thanksgiving Day forward one week, as it is presently celebrated.

In 2012, more than 253.5 million turkeys were raised. More than 210 million were consumed in the United States. An estimated 46 million of those turkeys were eaten at Thanksgiving, 22 million at Christmas, and 19 million at Easter.

Nearly 88 percent of Americans surveyed by the National Turkey Federation eat turkey at Thanksgiving. The average weight of turkeys purchased for Thanksgiving is 16 pounds, meaning that approximately 736 million pounds of turkey were consumed in the United States during Thanksgiving in 2012.

Deep fried turkey originated in the southern United States but is popular today throughout North America. Quickly cooked, deep-fried turkey is rich in flavor with a golden brown crispy exterior while moist and fork-tender on the interior.

Turkey can be used in so many cooking methods, including stovetop, oven, microwave, and grill. The wide range of cuts and products available such as ground turkey, turkey ham, turkey franks, turkey pastrami, turkey sausage, turkey bacon, and deli turkey make this protein easy to incorporate into any meal.