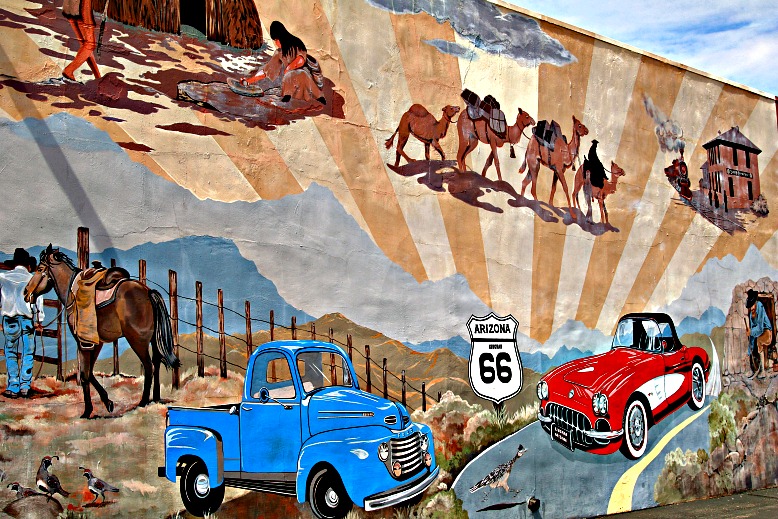 Route 66 served travelers for some 50 years, before the advent of the interstate highway system. Established on November 11, 1926, Route 66 was one of the original highways in the U.S., stretching southwestward from Chicago out to California’s coastal city of Santa Monica.

The highway, which became one of the most famous roads in America, originally ran from Illinois through Missouri, Kansas, Oklahoma, Texas, New Mexico, and Arizona to California, covering a total of 2,448 miles.

Route 66 was recognized in popular culture by the hit song (Get Your Kicks on) Route 66, a popular rhythm and blues standard, composed in 1946 by songwriter Bobby Troup and the Route 66 TV drama in the early ’60s.

Whether you are motivated by an interest in history or feel a nostalgic yearning for the “good old days”, Route 66 offers an unforgettable journey into America, then and now.

We’ll start our trip just west of the Colorado River and up the hill from Laughlin, Nevada in the historic town of Oatman. Once a gold-mining boomtown, Oatman hunkers in a craggy gulch of the Black Mountains, 28 miles southwest of Kingman. Rising above town is the jagged peak of white quartz known as Elephant’s Tooth.

Though Oatman is only a shadow of its former self, it is well worth a visit to this living ghost town that provides, not only a handful of historic buildings and photo opportunities, but costumed gunfighters and 1890s style ladies strolling the wooden sidewalks, as well as the sights of burros walking the streets.

Burros from the surrounding hills wander into Oatman daily and mosey around town blocking traffic, greeting visitors, and chomping carrots sold by the local shop owners.

From Oatman, take the thirty minute scenic drive through the Black Mountains to Kingman. A visit to the old powerhouse, which has been converted to a Route 66 Museum and visitor’s center, is a must. The Powerhouse Building is also home to Arizona’s Route 66 Association.

Kingman is a jumping off spot for Hoover Dam and Chloride, a well-preserved ghost town, 20 miles northeast.

Continuing east along the Mother Road you’ll come upon the small ghost towns of Hackberry and Valentine. The oldest town along this old stretch of the road, Hackberry’s origin dates back to 1874 when prospectors set up a mining camp on the east side of the Peacock Mountains. Today, Hackberry sits mostly silent with the exception of the revived Hackberry General Store and Visitors Center.

The main attraction at Valentine is the old schoolhouse at Truxton Canyon Training School on the Hualapai reservation. Now referred to as “The Red Schoolhouse”, the boarding school was constructed to house and assimilate young Hualapai Indians.

Popularized by the Eagles first hit single “Take It Easy” in 1972, “Standing on a corner in Winslow, Arizona, such a fine sight to see…”, put the town on the national map of consciousness. Winslow was a major stop for early travelers on the Santa Fe Railway as well as Route 66. Built in 1929, the La Pasada has been fully restored and caters to a new generation of Route 66 travelers.

From Winslow continue east 32 miles to Holbrook. In 1881, the Atlantic and Pacific Railroad laid its tracks through an area that was known as Horsehead Crossing. Home to cowboys, cattle ranchers, and railroaders, the settlement soon took on all the vices of a typical Wild West town, complete with a saloon called the Bucket of Blood. Law and order were non-existent, gambling was popular. Before long, Holbrook became a trade center for the area, where cattle, sheep, and wool were shipped out on the railroad.

By the time Route 66 made its appearance, the wild and lawless town had become more settled, and the narrow strip of asphalt became a symbol of hope to the city and the many travelers of the Mother Road.

Tour the nearby Petrified Forest National Park, one of the world’s largest and most vibrantly colored assemblies of petrified wood, historic structures, and archeological sites.

Spend the night at the real cool Wigwam Motel, comprised of 15 large wigwam sleeping units and vintage cars and an RV.

Well, I’m running down the road

Don’t let the sound of your own

And take it easy

Well, I’m a standing on a corner

And such a fine sight to see

Oh, we got it easy

We oughta take it easy