Every January something happens that is hard to believe, unless you have seen it! 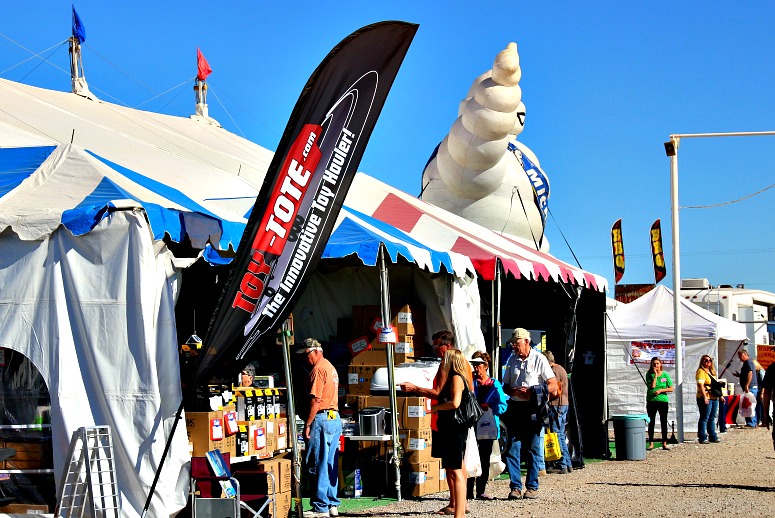 More than a million and half million visitors, mostly in recreational vehicles, converge on the sleepy little desert town of Quartzsite, located just 20 miles east of the California state line on Interstate 10, for the rock, gem, and mineral shows, plus numerous flea markets and the annual Quartzsite Sports, Vacation & RV Show. Wherever you look, you see RVs of every type, size, and vintage. It’s the Woodstock of the Snowbird set!

Co-promoter Kenny King noted in a news release, “If you’re looking for anything related to RVs, camping, and travel, you can usually find it at the Sports, Vacation & RV show in Quartzsite.” King added that here will be hundreds of new and used RVs on display and for sale and over a dozen service bays will be offering immediate installation, repairs, and warranty service.

In 2019, there were numerous tourism related exhibits from the U.S., Canada, Mexico, and Europe as well as representatives from dozens of the nation’s finest RV resorts and campgrounds. In addition many “workamper” recruiters from businesses, resorts, and private campgrounds were in attendance. King related, “The number and diversity of exhibits that you’ll find at the Quartzsite RV Show will not be found at any other show of this type in the United States.”

This phenomenon started over 35 years ago and is now billed as “The Largest Gathering Of RVers in the World”. The inaugural Quartzsite RV Show opened January 28, 1984 at the corner of Highway 95 (now Central) and Business 10 (now Main Street) in Quartzsite. With just 60 exhibitors and a small tent, the “new show in town” was still very popular since the majority of the people in Quartzsite were RVers.

In 1987 the show, now re-named the Quartzsite Sports, Vacation & RV Show, moved up the street to the Quartzsite Trailer Park which was situated directly across from the major attraction in town, the Quartzsite Pow Wow (the first Pow Wow was held in 1967).

This new home for the Quartzsite Sports, Vacation & RV Show lasted 10 years until the show grew to a point that the current 3.5-acre show site could barely hold the number of exhibitors that were now vying for exhibit space at this popular annual event.

With the new Quartzsite Sports, Vacation & RV Show grounds, the popular event was able to provide over 15 acres of public FREE parking.

For 2020, several major players in the RV Industry have come aboard as sponsors for the event. Co-promoter Kimmy King noted that Progressive RV Insurance, who stepped up as the “Naming Sponsor” several years ago, would continue to have a major presence at the 2020 event. Cummins Diesel, which has participated as an exhibitor at the show since 2015, is a new “Platinum Sponsor” and will be introducing a new line of portable generators during the 2020 show.

In addition, longtime exhibitor Dometic has added a Service Bay in the service and repair area of the show grounds and Dish Network is one the newest “Gold Sponsors” in support of its major trade show retailer CM Wireless. King also reported that FMCA had recently stepped up as one of the “Silver Sponsors” along with returning sponsors Redlands Truck & RV Service, Plasticover and the show’s exclusive RV dealer RV Country.

During our last visit to the Quartzsite Sports, Vacation & RV Show, we reminisced about how Quartzsite has changed over the last 16 years since our first visit and what future years might bring.

When we first attended the Quartzsite Sports, Vacation & RV Show in ’99, the RV Pavilion was packed with big-ticket items like RV satellites, tow hitches, and companies offering to install a solar array on your vehicle.

Looking ahead to future years, the Quartzsite Sports, Vacation & RV Show will continue to grow and attract a more general crowd. Thanks to items like cheaper flat screen TVs, smart phones, and affordable solar arrays with charge controllers to power all your gizmos, it is easy to have all the comforts of home while you’re camping.

As Quartzsite continues to grow and evolve, it will still be a wonderful place for RVers of all types to gather and relax with near perfect temperatures during the day and clear starlit skies at night. Quartzsite is an experience not to be missed—and we think you’ll like it too!