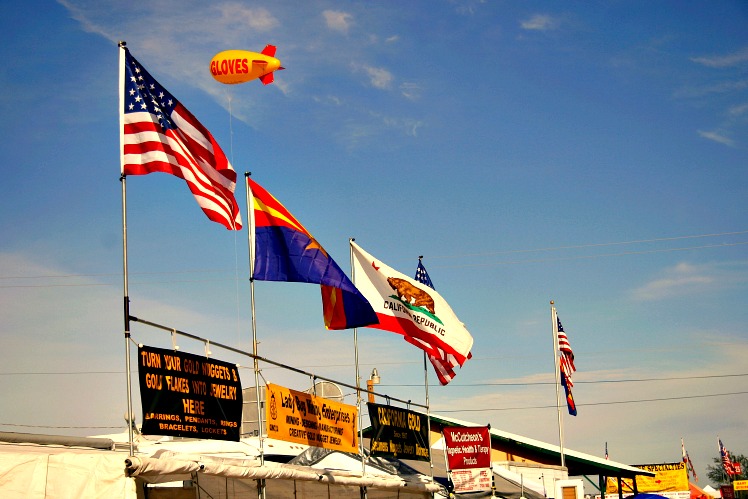 Quartzsite is located in western Arizona, 17 miles east of the Colorado River at the intersection of Interstate 10 and Highway 95. Quartzsite has been a rock hound’s paradise since the 1960s. Thousands of acres of dispersed BLM (Bureau of Land Management) camping draws upwards to two million visitors a year.

In 1856, settler Charles Tyson built a fort at the present site of Quartzsite for protection against Indian raids and to protect his water supply. Fort Tyson soon became a stopover on the Ehrenburg-to-Prescott stagecoach route. It had become known as Tyson’s Wells by the time the stage stopped running and the town was abandoned.

Quartzsite was established in 1867 and incorporated in 1989. A rock hunter’s paradise surrounds Quartzsite with agates, limonite cubes, gold, and quartz being just a few. Named Quartzite because quartz was occasionally found in the area, the name evolved to Quartzsite through an error in spelling.

Today, Quartzsite is also attracts over a million and a half visitors each winter who converge on this sleepy desert town of 1900 people in a wave of RVs during the months of January and February when over 2,000 vendors of rocks, gems, minerals, fossils, and everything else imaginable create one of the world’s largest open air flea markets.

Major gem and mineral shows as well as vendors of raw and handcrafted merchandise peddle their wares to snowbirds, collectors, and enthusiasts, making Quartzsite the place to be the first two months of each year.

In town, the Hi Jolly Monument honors the Arab camel driver, Hadji Ali, who took part in an unsuccessful 1850s U.S. War Department attempt to use camels as beasts of burden in the desert. To the south rise the Kofa Mountains. Historic and scenic areas include the Spanish Wall, Crystal Hill, Tyson Tanks, and Tyson Wells Museum. South in the Kofa Mountains is Palm Canyon, a tight gorge and home of Arizona’s only native palms, reached by a steep but rewarding climb. Farther south is Castle Dome Peak.

Tyson Wells began with an open lot where an RV Park was developed; the Sell-A-Rama Show started in 1978. Soon Tyson Wells became known as a leading Rock & Gem Show in the United States. Later, additional land was acquired for more parking, and two more shows—Rock & Gem Show and Art & Craft Fair—were added. Tyson Wells has something for everyone with the three shows in January and February, seasonal vendors, self-storage units, and an RV Park.

You won’t want to miss the 2020 Quartzsite Shows!