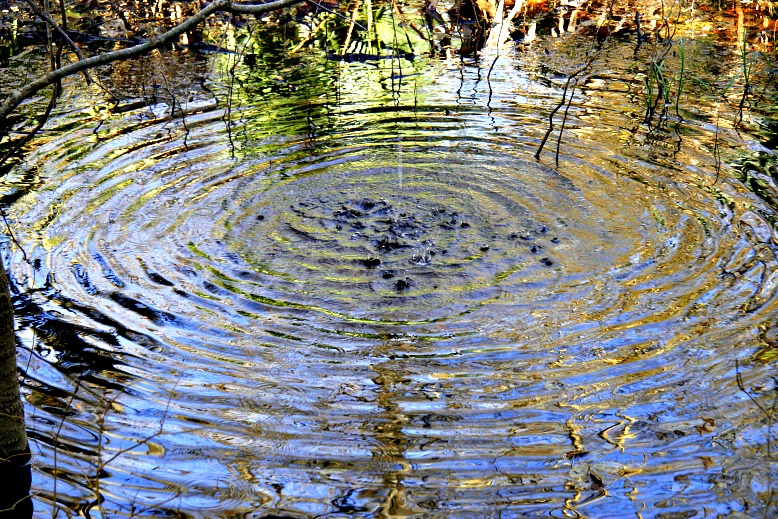 If you were to blindfold a person and drive him into the lush undergrowth of the 270-acre park, it’s likely he’d be clueless as to his whereabouts. Studded with dense clusters of dwarf palmettos, the park’s namesake plant species, shaded by a moss-draped canopy of ancient live oak trees, Palmetto State Park is Texas’ own version of a subtropical jungle. At the end of the park’s entrance road the landscape vividly plummets into the water-carved vista of the San Marcos River.

Back in the mid-30s, a small piece of that swamp 13 miles northwest of Gonzales—and nine miles southeast of Luling—became Palmetto State Park. The park abuts the San Marcos River and also has a four-acre oxbow lake.

The beautiful stone buildings in the park were constructed by the Civilian Conservation Corps (CCC) during the 1930s.

A tropical paradise, Palmetto is an unusual botanical area that resembles the tropics more than Central Texas. The ranges of eastern and western species merge, resulting in an astounding diversity of plant and animal life. Most notably, a stand of dwarf palmetto (Sabal minor) plants is found around the park’s ephemeral swamp.

These ground-hugging, trunkless palms normally are found in the moist forests of East Texas and Louisiana, as well as much of the southeastern US. The extensive stand in Palmetto State Park was isolated thousands of years ago, considerably west of its natural range.

Wildlife frequently seen in the park includes white-tailed deer, armadillos, squirrels, raccoons, and over 200 species of birds including wild turkeys and several species of warblers.

It’s what you wouldn’t expect to see that makes this park special: a swampy wetlands. And it’s not just any old wetlands. The Ottine Swamp, named for the small town just outside the park’s gates, is a primeval wonderland of towering trees, peaty bogs, and warm springs.

Crouch at the edge of a lagoon, as the spring-fed ponds are called locally, and the sweet scent of wild onion wafts skyward. Spanish moss drips from elm, hackberry, and cottonwood trees. Trumpet vines and wild grape twist around gnarled trunks and climb toward the canopy. Everywhere, palmetto palm fronds rustle in the breeze. These dwarf palmettos give the swamp an otherworldly atmosphere.

One of the first thing we look for at a state park is a trail to hike, and the winding, well-manicured trails at Palmetto offer plenty to see. The Ottine Swamp Trail and Palmetto Interpretive trails have boardwalks and bridges so you can wind through swamps filled with the park’s namesake dwarf palmettos. You’ll feel as if you’re in a tropical paradise.

We hiked the Palmetto Trail loop, careful—as a large sign warns—to watch for snakes. We marveled at the sheer greenness of the place, and the profusion of fan-shaped palm leaves.

The San Marcos River Trail leads you along the high banks of the San Marcos River, where towering cottonwoods and sycamore trees stand guard. The Mesquite Flats Trail offers a look at the drier, savannah-like parts of the park, where prickly pear cactus finds a home.

When you’re finished exploring the park on land, enjoy the water. The always-fun Oxbow Lake offers calm water to cast a fishing line in search of catfish or sunfish. Try out a paddleboat, kayak, or canoe, or take a swim in the cool water. The San Marcos River low-water crossing is a great place to either splash around in the water or take a tube for a 20- to 30-minute float around the park.

Boaters can put in the river at Luling City Park and travel 14 miles to Palmetto, portaging around one dam along the way. Put-in and take-out points are limited, as the river is mostly bordered by private land. There are no rapids, but almost always a steady current. Check river conditions at the park. For this trip, bring your own canoe and prearrange your shuttles.

For RVers wishing to stay overnight or longer, the park provides great camping facilities. The campground is clean and quiet, and the stars at night are … well, you know the song.

As we explore America by RV, surprises await at every turn of the road. Natural beauty abounds when least expected.