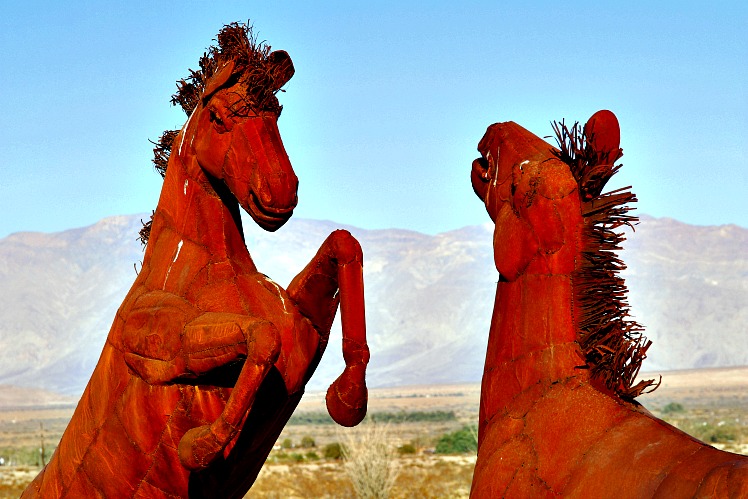 All manner of strange and interesting pit stops are found across the country. Road trips wouldn’t be nearly as exciting without these alluring, alarming, and sometimes disappointing landmarks. Truth be told, America plays host to some of the weirdest roadside attractions found anywhere. Here are six of the strangest roadside attractions you need to check out on your next road trip across the country.

Better stock up on boudin and pork cracklins, kolache and doughnuts, and other snack foods—there are going to be many, many detours in your future.

There’s a really big roadrunner in Texas. His name is Paisano Pete and he wants to welcome you to the town of Fort Stockton (he is their mascot, after all). An off-beat roadside attraction, Paisano Pete has been a fixture in this West Texas town since 1979.

Paisano Pete was for many years the World’s Largest Roadrunner. In 1993, Pete lost his world’s largest title to an enormous statue in Las Cruces, New Mexico, but this hasn’t dimmed his appeal nor stopped him from becoming Fort Stockton’s most photographed resident. And at 22 feet long and 11 feet tall, he’s still pretty big.

As thousands of drivers motor down Interstate 85 each day, their attention is caught by the Gaffney (South Carolina) Peachoid, the water tower’s sphere which is sculpted and painted to look like a gigantic peach. The multi-story Gaffney Peachoid, the world’s largest peach, has grown to become the region’s most famous roadside stop.

Town Too Tough To Die

Live out all of your Wild West dreams in Tombstone, Arizona, the location of the infamous Gunfight at the O.K. Corral. Cowboys, cowgirls, and wannabes fill up the town’s saloons and the O.K. Corral museum puts on reenactments of Wyatt Earp’s 1881 shootout. The buildings are so well maintained and the townsfolk so authentic that at times it’s easy to think you’ve landed on a John Wayne movie set.

While some creatures are ambitious fantasies such as a 350-foot-long serpent arcing across the playa, many of the sculptures represent real-life creatures that once roamed this land. In 2008, Ricardo Breceda was commissioned by local philanthropist Dennis Avery to make sculptures for his extensive desert property known as Galleta Meadows, but the creatures seem to have multiplied around town.

To find Breceda’s 130 or so rust-red, scrap-metal sculptures, pick up a detailed map at the Anza-Borrego Desert Natural History Association bookstore in Borrego Springs (also a great place for nature-themed gifts).

Mother of All Tourist Traps

One of (if not the) the most prominent tourist traps has to be Wall Drug. But what the heck is it? It’s like a gigantic greatest-hits collection of roadside kitsch with an entire town built around the sprawling drugstore. Once there, you’ll experience dinosaurs both statuesque and animatronic.

You’ll see giant jackalopes, singing cowboys, Western art, a shooting gallery, and the requisite tacky Western tropes. As advertised, the ice water is still free, the donuts are delicious, and the open-face turkey sandwich is a gut buster. You will leave with a bumper sticker that says “Where the heck is Wall Drug.” In a state that also boasts the Mitchell Corn Palace, it manages to be the kind of roadside America.

Killer Bees have been around since the 1950s when some African queens escaped a Brazil lab and began flirting with the local gentry. Their volatile spawn migrated north, growing nastier with each succeeding generation. In October of 1990, they illegally crossed the U.S. border at Hidalgo, Texas.

Most towns would view this occasion with horror, something best left unmentioned in the hope that it would be forgotten. Happily, Hidalgo was blessed with a mayor who knew that killer bees bring honey as well as a sting. John Franz gave the media the buzz: Hidalgo was “Killer Bee Capital of the World” and proud of it.