Saguaro National Park is more than just 6-ton gigantic cacti (though it has those, too) 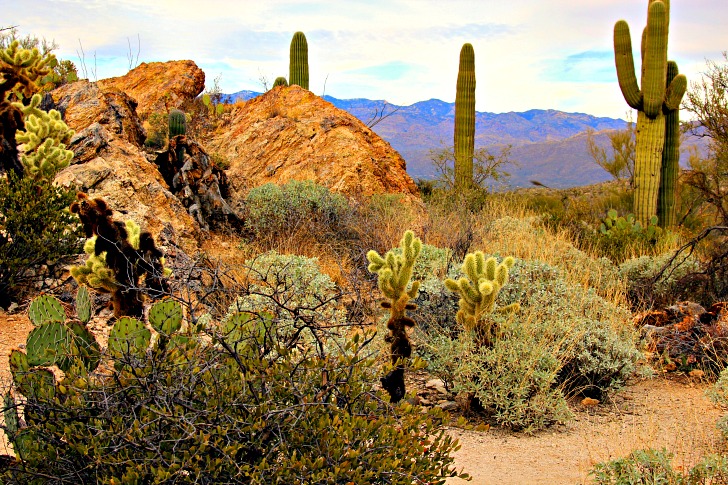 Yearning to see towering, giant saguaros in their native environment? Saguaro National Park protects and preserves a giant saguaro cactus forest that stretches across the valley floor near Tucson, Arizona.

Unique to the Sonoran Desert the park’s giant saguaro has a slow growth cycle and long lifespan. The cactus grows between 1 and 1.5 inches in the first eight years, flowers begin production at 35 years of age and branches, or arms, normally appear at 50 to 70 years of age. An adult saguaro is considered to be about 125 years of age and may weigh 6 tons or more and be as tall as 50 feet. A saguaro’s lifespan can be up to 250 years.

But the saguaro is merely the headliner for a roster of desert vegetation to be seen as you hike or drive through the park. You’ll also spot spiny ocotillo, huge clumps of prickly pear, and the tiny hedgehog and stubby barrel cactus, as well as spiky mesquite and palo verde trees.

First designated as Saguaro National Monument in 1933, the area received national park status in 1994. It is also the ancestral home of the Tohono O’odham people who today continue to play a role in the park’s culture visiting every year in the early summer to pick saguaro fruit.

For many, the giant saguaro cactus silhouetted by the setting sun is the universal symbol of the American Southwest. And yet, these majestic plants are only found in a small portion of the U.S. Saguaro National Park protects some of the most impressive forests of these sub-tropical giants. Saguaro is actually two parks separated by a metropolis of 1 million residents: the Tucson Mountain District and the Rincon Mountain District. In 2018, the park drew 1,229,594 recreational visitors.

Saguaro National Park is located within a desert but contrary to what you might expect there is an abundance of life. Plants here are adapted to drought, so during long dry periods they are able to go dormant conserving their water. At these times many plants appear lifeless but shortly after a rainfall they’re able to come to life sprouting new green leaves. Within just 48 hours after a rainfall, the ocotillo plant is able to change from what appeared to be a handful of dead sticks into a cheerful shrub with tall green branches, covered in new leaves.

The Rincon Mountains peak at a considerably higher elevation than the Tucson Mountains, therefore there are more biotic communities and increased plant and wildlife diversity. Because of the higher elevation in the Rincons, animals like the black bear, Mexican spotted owl, Arizona mountain king snake, and white-tailed deer live in this district.

While each season has its draw, spring, when the desert blooms with yellow, orange, and purple wildflowers, is hands-down its most beautiful and busiest time of year. Fall is similarly temperate and winter offers the chance to see the water flowing in the washes. Arizona’s merciless heat makes summer significantly less popular.