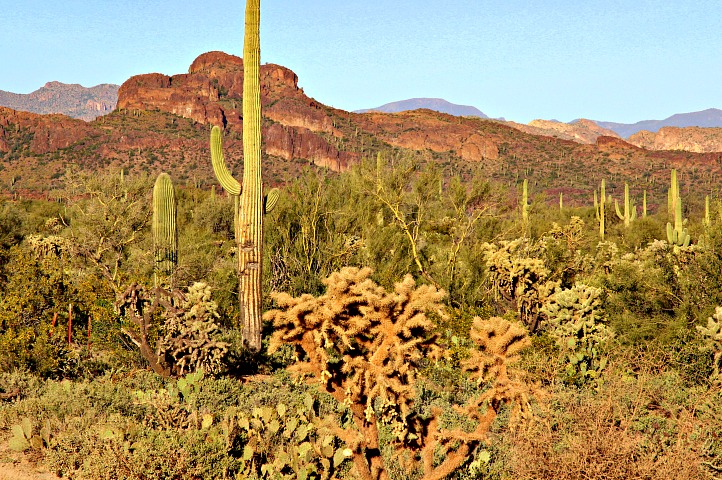 Let’s head right to the state’s crown jewel, the Grand Canyon—an iconic attraction that’s on every RVer’s bucket list. It’s hard to imagine a trip to Arizona that doesn’t involve at least a peek at the Grand Canyon. This massive gorge isn’t just a geological marvel, it’s a symbol of Western adventure and American spirit. Visible from space, the canyon is close to 300 miles long and at points over a mile deep.

For decades poets and artists have tried to capture the beauty of this place. One look over the edge and it’s easy to see why it’s considered one of the Seven Wonders of the Natural World.

The 1,900-square-mile canyon took nearly 2 billion years to make, and it was worth the wait. For starters, it’s huge—11 miles wide and one mile deep at one point.

When you think of desert heat, cacti, and cowboys, you’re thinking of the Sonoran Desert. Washed over by silence and muted gray-green forms, southern Arizona’s Sonoran Desert is mesmerizing like no other landscape. But it is anything but empty. The thousands of saguaros here have stood sentinel for centuries. They don’t even start growing their iconic arms until they are about 70, and they can live more than 200 years.

There is no better place to get lost among the saguaros and their desert buddies—fuzzy cholla and spindly ocotillo plants, fluorescent green palo verde, and mesquite trees—than in Saguaro National Park.

Organ Pipe Cactus National Monument celebrates the Sonoran Desert, raw and unspoiled, big and bursting with color. The southwestern Arizona monument is one of the state’s most beautiful places. The 21-mile, mostly gravel Ajo Mountain Drive is wildly scenic and suitable for cars. The Estes Canyon and Bull Pasture trails form a loop along which you can see a profusion of wildflowers in spring.

The Arizona-Sonora Desert Museum features all the prickly giants and creatures surviving in the Sonoran Desert. Among them: pumas, coyotes, roadrunners, desert tortoises, and javelinas.

Arizona in the spring is the right place at the right time. It’s when the Mexican poppies, brittle bush, globe mellows, fairydusters, chuparosas, desert marigolds, lupines, desert pincushions, and numerous other wildflowers bloom.

Remember to bring your camera.

Beyond the explosion of color that takes over the desert for a few weeks, part of the allure of wildflower season is how little we know about it. It’s impossible to predict when it’ll come, and it requires a “triggering rainstorm” months in advance.

Its red-rock mountains and cold creeks alone make Sedona a special place, but there’s something else at work. Sewn into the fabric of the town is the New Age vibe that brings the health-food-eating, yoga-practicing aficionados in droves. But where does that vibe come from? It’s the vortexes, duh.