Lapping water and Gulf breezes: We must be on the coast! 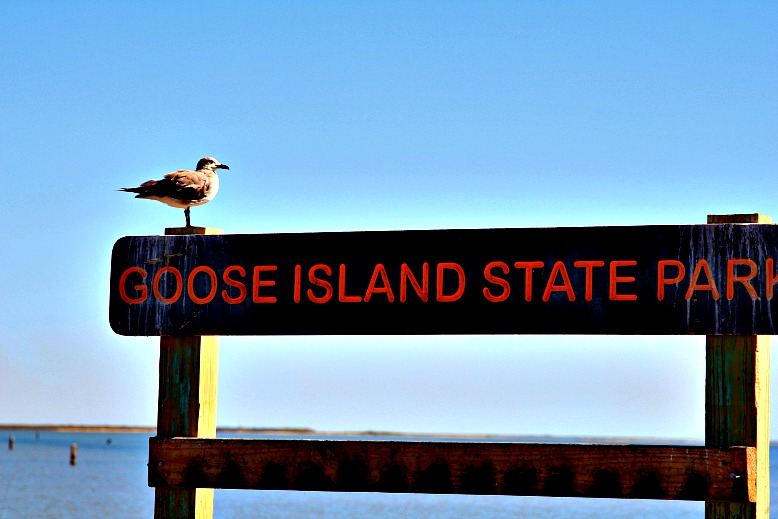 Life around Rockport changed dramatically August 25, 2017 when Hurricane Harvey, a powerful Cat 4 hurricane, made landfall directly across the area. The storm forced people from their homes and patients from hospitals and turned quiet streets into turbulent torrents.

We first visited Goose Island State Park in December 2011. During our recent visit earlier this month we noted that recovery efforts are under way. The east end of the island, the fishing pier, the Group Hall, and all overnight camping on the Bayfront side is closed to public access due to park construction and repairs. These closures are expected to last several months. This will impact fishing and birding access and other day use activities.

Visitors to the Island engage in a variety of activities, including camping, birding, fishing, boating, water sports, picnicking, hiking, photography, geocaching, and wildlife observation. A leisurely 1-mile hiking trail is available. Swimming is not recommended as the shoreline has concrete bulkheads, oyster shells, mud flats, and marsh grass.

Goose Island State Park is best known for two celebrated residents, one of which is the Big Tree—an enormous 1,000 year old coastal live oak that has survived prairie fires, Civil War battles, and hurricanes. The other resident is the rare endangered whooping crane that returns to the area every winter.

A small bridge connects the main portion of the park—one of the oldest in the state park system—to a small sliver of sand that gives the park its name. The ancient barrier island has been shrinking due to erosion caused by Gulf currents and wave action from the surrounding bays. Stepped-up efforts in recent years, including installation of offshore rock breakwater, dredging, and marsh restoration projects, have stabilized the island’s shell ridge, oyster beds, seagrass shoals, tidal flats, and salt marshes.

Approximately 500 bird species have been recorded in the area, including the whooping cranes which spend each winter in the coastal marshes of nearby Aransas National Wildlife Refuge.

Developed RV campsites in a secluded, wooded area are available, all with water and electric service. Amenities include a fire ring, outdoor grill, and picnic table. There are also 25 walk-in tent sites without electricity. The park can accommodate a maximum of 64 in the one-acre Group Camping Area. Covered picnic tables (the Park calls them “open cabanas”) are all that remain of the Bayside camping area following Hurricane Harvey.

Fishing opportunities include speckled trout, redfish, drum, and flounder; crabs and oysters are abundant as well. There is a regular boat launch and a kayak/canoe launch (bring your own boat). A fish cleaning station is provided. You do not need a fishing license to fish from shore or pier in a Texas state park.

A nearby adjunct of the state park holds the magnificent Big Tree. With a height of 44 feet, circumference of 35 feet and crown spanning roughly 90 feet, the massive coastal live oak has survived Mother Nature’s fiercest storms including Hurricane Harvey for more than 1,000 years.

The Texas Parks and Wildlife Facebook page posted a photo of the tree following the storm surrounded by the wreckage of its brethren. Younger trees, they wrote, might have perished in the calamitous storm—but “you don’t get old by being weak.” Texans seem to have found some solace in this 44-foot pillar of strength.

Goose Island State Park was initially built in the ’30s by the Civilian Conservation Corp (CCC).

Drive carefully as you enter the Park and drive through the Park—some of the roads are narrow and tree lined with low or overhanging branches.