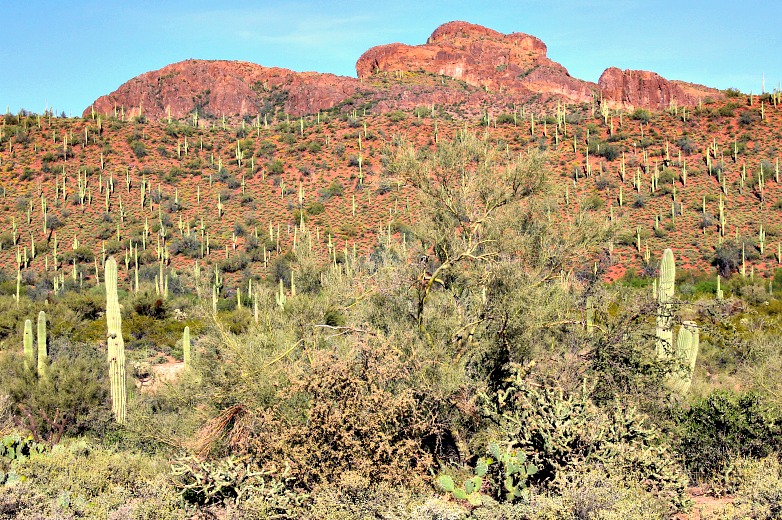 Many snowbirds wintering in the Grand Canyon State flock to Tucson, Yuma, or the Phoenix metro area. Regardless of where you roost this season, Arizona has plenty of options for winter fun outside these metro areas.

While the bounty of outdoor recreation opportunities might be too much for a lifetime, it will assure you that your days in the Arizona sun will have plenty of action.

The Superstitions, looming east of Apache Junction, are the largest of the mountain ranges ringing Phoenix. Stretching 24 miles east and west and 9 to 12 miles north and south, the wilderness is crossed by trails ranging from flat and easy to steep and strenuous. The 160,200-acre wilderness area, part of Tonto National Forest, contains one of the state’s most popular trails—the Peralta—yet the vast interior of the Superstitions boasts some of the state’s most rugged, seldom-seen territory.

The Apache Trail through the Superstition Mountains was built to supply construction workers building Roosevelt Dam in the early 1900s. Saguaro-covered hills and deep canyons stretch for miles, broken by red-rock cliffs and hoodoos.

The area is a favorite of sightseers, boaters, hikers, and anglers. The Apache Trail, aka State Route 88, is not for the squeamish or those afraid of heights. It’s full of twists and turns, rising and falling with the hills and valleys. Part of the road is paved; the graded dirt stretch is suitable for most cars but not recommended for large RVs.

The Hohokam people built these structures when they were near the height of their power some 700 years ago. They created villages that extended from the site of modern-day Phoenix to southern Arizona. They laid down 1,000 miles of irrigation canals in the Salt River Valley, a network that eventually supported enough fields to feed about 40,000 people. The monument preserves 60 prehistoric sites, including a four-story earthen structure. Interpretive walking tours and exhibits are available.

Here’s something that no other park in the Maricopa County system has: 65 acres of grassy picnic space. In addition to picnicking, the park has close to 20,000 acres of desert topography for hikers, bicyclists, joggers, and horseback riders. Duffers can try the links at Tres Rios Golf Course, and fishermen can catch and release along the Gila River, which runs through the park.

Established in 1752 as a Spanish fort, Tubac is an exquisite, brightly painted town with more than 100 galleries, shops, and restaurants lining its meandering streets. A quaint haven for artists, Tubac was the first permanent European settlement in what later became Arizona.

A half day can easily disappear wandering amongst this wealth of painting, sculpture, ceramics, and photography, as well as unique regional fashion, leather, crafts, antiques, and jewelry.

In the northwest face of the Santa Rita Mountains, one of southeast Arizona’s forested Sky Islands, the cool refuge of Madera Canyon is just 25 miles south of Tucson and 12 miles east of Green Valley. This is part of the Coronado National Forest.

Madera Canyon, with active springs and a seasonal creek, is a lush oasis supporting an amazing diversity of life zones of the Santa Rita Mountains and Madera Canyon. Beneath the shade of the trees, Madera Creek tumbles over bedrock and boulder. Water and stream-borne sediment gradually grind rocks to gravel, gravel to pebbles, and pebbles to sand.