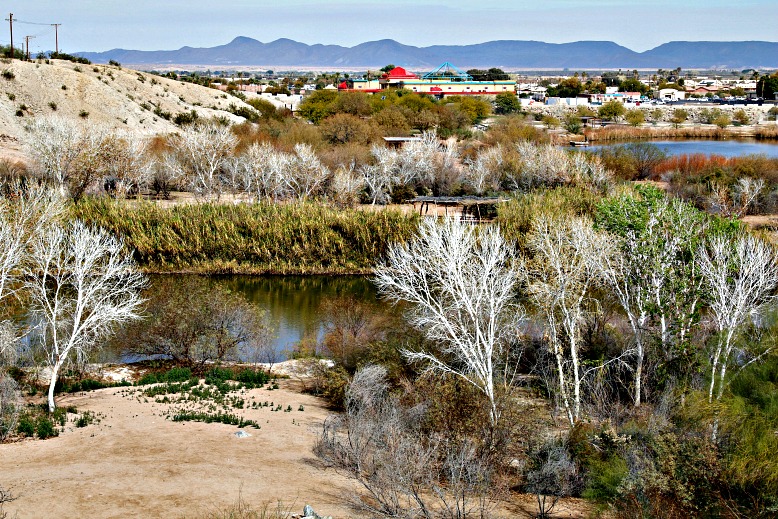 We first visited Yuma in the late 1990s and found little to hold our interest.

Here was a desert town blessed with a river and you couldn’t find it, just a place of overgrown brush and littered garbage. We revisited Yuma a few years later and nothing changed. The town felt rundown and having a trashy core seemed to impact everything.

Eventually we thought we’d give Yuma another try.

Since we wanted to see this transformation up close we visited the Yuma Crossing National Heritage Area and wandered the Pivot Point Interpretive Plaza, Gateway Park, and West Wetlands before crossing the river on 4th Avenue.

The very first train to enter into Arizona did so at Yuma, crossing over the Colorado River from California in 1877. And, although that original crossing point no longer exists, a 1907 Baldwin locomotive sits on the very spot where the tracks entered town. At the Pivot Point Interpretive Plaza, we found a revitalized park adorned with plaques detailing the railroad, the nearby tribal communities, and river history.

You can climb into the cab (but please not on top of it). With 16 colorful panels describing how people crossed the mighty Colorado River in Yuma over the centuries, the plaza provides an excellent introduction to the history of Yuma Crossing, a National Historic Landmark.

It also preserves the concrete pivot on which the original swing-span bridge turned to allow steamships to pass on the river—which before dams were built and water was diverted to Los Angeles, Phoenix, and Las Vegas—came up to the level of the plaza. A staircase from the plaza leads into Gateway Park.

Gateway Park is Yuma’s downtown riverfront park. With convenient vehicle access of Gila Street and shaded parking under Interstate 8, Gateway Park has a large beach, picnic armadas close to the water, restrooms, playground, and large stretches of tree-covered lawns. It is located at the center of the riverfront multi-use pathways with a magnificent view of the historic Ocean-to-Ocean Highway Bridge.

The West Wetlands was the original site of Yuma’s “City Dump”. It closed in 1970 and Yumans dreamed of converting these 110 blighted acres into a beautiful riverfront park. Today these dreams are becoming a reality. With local, state, and federal financial support, the first phase of the park opened in 2002, including the lake, picnic armadas, boat ramp, restrooms, parking, and picnic areas. Each year since, more and more features have been added including the Ed Pastor Hummingbird Garden, a lighted multi-use pathway, Army of the West statue, a disc golf course, and the Stewart Vincent Wolf Memorial Playground, that kids love to call “Castle Park”.

Another day we visited the East Wetlands and Yuma Territorial Prison State Historic Park, drove over the Ocean-to-Ocean Bridge, and wandered the Sunrise Point Park (part of the Yuma Crossing National Heritage Area).

Through a unique partnership among the Quechan Indian Tribe, City of Yuma, Arizona Fish and Game Department, and the Yuma Crossing National Heritage Area, more than 200,000 native species of trees and grasses have been planted over its 400 acres since 2004. On the south side of the Colorado River, there is a 3.5-mile signed hiking trail. For those interested in a shorter walk, there is a beautiful overlook along the river about one-half mile upstream from Gateway Park affording a 360-degree view of the wetlands. Part of the paved riverfront path extends along the edge of the Yuma East Wetlands on a canal levee.

On the north side of the river, the Quechan Indian Tribe has developed Sunrise Point Park (Anya Nitz Pak), overlooking a restored marsh and 40 acres of the finest stands of native cottonwoods and willows along the lower Colorado River. The park is reflective of the tribe’s culture.

The art of life lies in a constant readjustment to our surroundings.