“a feller could meet hisself comin’ round one of them bends” 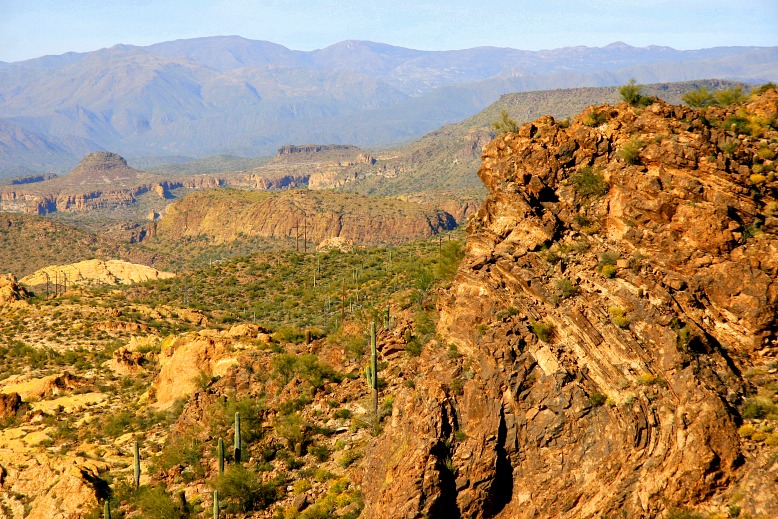 An historic road and a National Scenic Byway, the Apache Trail winds through, around, up, and down the Superstition Mountains. The 120-mile scenic route takes travelers through deserts, mountains, canyons, by cliff dwellings, along lake shores, and through old mining towns.

The road winds its way from Apache Junction, passing Canyon lake, Apache Lake, and Roosevelt Lake. It goes from Roosevelt Dam to Globe-Miami and then becomes US-60 and heads west to Superior and back to Apache Junction.

The greatest scenery lies within the first 44 miles from Apache Junction to Roosevelt Dam. The road winds through a very wild region showcasing wildlife, volcanic debris, and huge, layered buttes. It’s a trip into outback Arizona and back in time. It’s not a modern road and is paved just past Tortilla Flat. From there it’s a narrow dirt road until near Roosevelt Dam.

The Apache Trail was built as a haul and service road for the construction and maintenance of Roosevelt Dam. For the most part, it is a single-lane road with occasional pull-outs. In 1919, several stations stood along the trail to supply travelers with their needs. There was Government Well, Mormon Flat, Fish Creek Lodge, and Snell’s Station between Mesa and the dam. The completion of the Phoenix-Globe Highway through Superior in May 1922 allowed drivers to circumvent the entire Superstition Wilderness area, an almost roadless region.

Once past Apache Junction, the Superstitions dominate the road.

The 12.5-acre Superstition Mountain Museum collects, preserves, and displays the artifacts and history of these Superstition Mountains and surrounding area. Nature trails crisscross the area surrounding the museum buildings that include a Wells Fargo office, stage coach stop, barber shop, assay office, and other displays of authentic relics of this era. Museums in their own right, the Elvis Memorial Chapel and the Audie Murphy Barn were moved to the site, piece by piece, nail by nail, and reconstructed.

Nearby, the Goldfield Ghost Town with the Superstition Mountain Lost Dutchman Mine Museum offers train rides and an Old West atmosphere. Shops and restaurants line the quaint streets. It was once a booming community of 5,000 with three saloons and a hotel. Most of the residents earned a living in 50-odd mines around the area in the 1890s. Goldfield offers an interesting guided tour of a reconstructed section of the Old Mammoth Mine.

Next you’ll pass the Lost Dutchman State Park, which is the starting point for several hiking trails and has a great campground with electric and water utilities and several picnic areas.

A popular stop along the Apache Trail, Canyon Lake, with a surface area of 950 acres, is the third and smallest of four lakes created along the Salt River. Two others, Apache Lake and Roosevelt Lake, are upstream. Canyon Lake lies approximately 15 miles up the Apache Trail.

A short distance further, Tortilla Flat now has a permanent population of six but once boasted a school, hotel, general store, and about 125 residents. The Tortilla Flat Stage Stop became a tourist attraction many years ago. Fire destroyed many of the buildings in 1987. Most have been restored, though not like they originally were.

Five miles up from Tortilla Flat, the road turns to dirt, but the scenery gets even more spectacular. The trail is filled with many twists and turns. Old-timers claim “a feller could meet hisself comin’ round one of them bends.” High cliff walls stand watch over both sides of the road as it goes through Fish Creek Canyon.

Fish Creek Hill is an experience in itself. It is steep, narrow, and slow going, but anyone can make it who drives with caution. The canyon narrows and then suddenly opens up to show a spectacular view of Geronimo Head.

Next is Apache Lake, surrounded by towering cliffs and majestic saguaros. There’s an excellent view of the Painted Cliffs and Goat Mountain across the water. Apache Lake has an marina, motel, and restaurant all in one spot.

The road runs alongside Apache Lake as it nears Roosevelt Dam. There is a good view of the dam from near water level.

The Apache Trail has stopping points to view the lake from above and take a good look at the bridge over Roosevelt Lake. At this spot one can head to Payson or stay on the trail to Roosevelt and Roosevelt Visitors Center operated by the Forest Service. The Tonto National Monument is just a few miles off the highway up in the mountains.