The most beautiful place on Earth 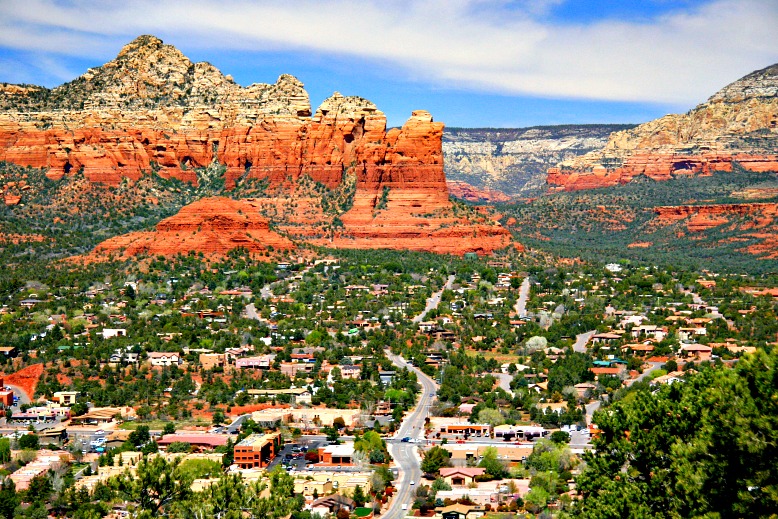 If you delight in gazing at towering red rocks or driving through rugged canyons, then go to Sedona.

If you admire exquisite art, or are captivated by amazing architecture, then go to Sedona.

If you want to see ancient cliff dwellings, hear tales of Hollywood cowboys, or thrill to outdoor adventures, then (you guessed it) go to Sedona.

Sedona is a must-stop.

Although American Indians lived in the region as far back as 1100, European settlers didn’t arrive until 1876. Drawn by the abundance of water and fertile soil, pioneers began farming crops and planting orchards on the banks of Oak Creek. The community continued to grow, and by the turn of the century, about 15 homesteading families worked the land. These early settlers of Sedona called their town Upper Oak Creek.

At the turn of the 20th century, T.C. Schnebly built a large two-story home that served as general store and hotel near Oak Creek. He also organized the first post office. When it came time to name the community, his original suggestions of Oak Creek Crossing and Schnebly’s Station were rejected by the Postmaster General as being too long—they would not fit on a postmark.

So, T.C.’s brother suggested naming the town after T.C’s wife, Sedona. Postal officials approved the name, and in 1902, T.C. began running the post office from the back of his home. Today Sedona is home to approximately 10,000 people and covers 19 scenic square miles.

Sedona’s beauty makes it an alluring destination. As early as 1895, anthropologist/archaeologist Jesse Walter Fewkes predicted that the area would become extremely popular among tourists. Today, 4.5 million travelers come each year to enjoy mild winter weather and gorgeous scenery; to shop amid its famous galleries and varied shops; or for the vortexes.

Even if you’re not an adherent of the New Age movement, plan on visiting at least one of Sedona’s famous vortexes. They’re at some of the most gorgeous spots around town. Vortexes (the proper grammatical form “vortices” is rarely used here) are thought to be swirling centers of energy that are conducive to spiritual healing, meditation, and self-exploration. Believers identify four primary vortexes: Boynton Canyon, Bell Rock, Cathedral Rock, and Airport Mesa.

To truly appreciate the legacy of Sedona’s early pioneers, spend time outside reveling in the same heart-freeing beauty they experienced. Hike the trails they carved from this wilderness. Over a century later—even as Sedona has grown into a world-class destination filled with art galleries, resorts, spas, and restaurants—you can still walk the same pathways the earliest residents walked. That’s part of the magic of this landscape, how closely connected it is to wild country.

Sedona is located at the mouth of a rugged canyon, surrounded by the 1.8-million-acre Coconino National Forest. A 2,000-foot-high escarpment known as the Mogollon Rim towers over town. The cliffs are made of ancient deposits of soft limestone, mudstone, and sandstone, which easily erode. Formations such as “Steamboat” and “Snoopy” can be seen while wandering Sedona’s main street.

Nine trails form a network of routes. All are well marked, with signs and trail maps at each junction. The 5-mile network consists of interconnecting loops, which lead you to vistas of red rock or along the lush greenery of Oak Creek.

The Eagle’s Nest Loop and the Apache Fire Loop are joined together by the Coyote Ridge Trail. Eagle’s Nest is the highest point in the park with an elevation gain of 300 feet. These three major loops are connected along the riparian corridor by the Kisva Trail, which also leads up to the short loop of the Yavapai Ridge Trail. The Javelina Trail takes you into the pinyon/juniper woodlands and back to the other loops.

It’s best to leave your RV parked at a campground and take your towed vehicle when you visit Sedona because parking is very limited.