Benson, Arizona, has a wealth of history just waiting to be rediscovered 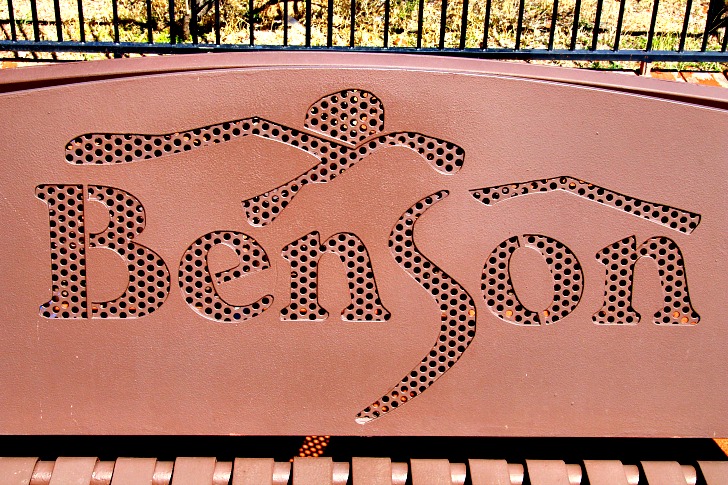 Founded by the Southern Pacific Railroad back in 1880, Benson was once a busy hub that connected major Southern Arizona communities. It was also the point where the Southern Pacific line hooked up with the Sonoran Railroad line, which ran into Mexico. Even today, modern train enthusiasts gather in Benson to watch the trains pass through, and visit the restored historic train depot that today houses the Benson visitors center.

There was a smelter operating in the area from 1881 to 1909, and wagons brought in loads of copper and silver ore to be shipped out via rail. More people came to farm the land once artesian wells were drilled in the 1890s. Over the years, there were several fires and a flood—but Benson’s populace didn’t drop off significantly until the 1930s, when the Depression hit.

Taking an RV camping trip to Benson is an adventure in itself—and there is so much to do while you’re there. It doesn’t much matter where your interests lie, you can construct an impressive itinerary that might include some of these nearby attractions.

Kartchner Caverns State Park provides an unforgettable way to get in touch with the earth—literally. Located on State Route 90 in the Whetstone Mountains these unique caverns are the most pristine in the U. S.

You can take a guided tour through a limestone cave, where mineral formations make for a stunning visual display. These caverns are living, growing, wet caves; the moisture levels are closely monitored to ensure they are not destroyed.

There is also a visitors center, gift shop, interpretive displays, modern campground, and a hummingbird garden on the park grounds.

How the West Was Won

A short drive north of Benson, fans of the Old West flock to Gammon’s Gulch, an 1890’s town and mining camp. This ghost town movie set was recreated like the Wild West really was with antique cars, movie memorabilia, nature path, and birding area.

Everything in Gammon’s Gulch is authentic, from the working telegraph to the shingle nails, even the outhouses were originally used by old west cowboys. The site of numerous movies, music videos, and photo shoots, this classic Western town is a popular attraction. Take in a special event, or tour the museum to see a collection of movie memorabilia, antiques, and more.

The Town Too Tough to Die

Sparked by Edward Schieffelin’s silver strike (skeptics warned he’d only find his own tombstone), the raucous town boasted more than 60 saloons. Tombstone is known for the famous street fight near the OK Corral between Wyatt, Virgil and Morgan Earp and Doc Holliday vs. Frank and Tom McLaury, and Billy and Ike Clanton.

Cochise’s Stronghold, the historic site in the Coronado National Forest, provides a fascinating day-trip from Benson. Located in the Dragoon Mountains at an elevation of 5,000 feet, this is the rugged natural fortress where the great chief and his followers held out against the U.S. Cavalry.

Within the Stronghold is a hiking/equestrian trail that goes from the Cochise Stronghold Campground, over the “Stronghold Divide” and down into the West Stronghold Canyon. This trail is approximately 5 miles long one way.

The Interpretive Trail leaves from the campground and consists of a short loop trail approximately 0.12 of a mile long with information along the way about the Stronghold, Cochise, and his descendants. It is a beautiful, leisurely walk among the oaks and junipers.

The 11-site campground accommodates small RV under 30 feet; no utilities or dump station.

To get there, take I -10 east from town, exiting at the Dragoon exit (Texas Canyon). Drive east for 13 miles until you get to U.S. 666 and turn south (right), driving for another 6 miles. Turn west and drive into the national forest.

Where to Stay: Butterfield RV Resort and Observatory

Easy-on, easy-off (I-10 at Exit 304, south one-half mile on Ocotillo Avenue), Butterfield RV Resort and Observatory and is conveniently located immediately behind Safeway and in close proximity to downtown. The park is clean and well maintained. Interior roads are asphalt; back-in sites are gravel with pull-through sites asphalt.

Fast is fine but accuracy is final. You must learn to be slow in a hurry.