An historic destination for the arts, Tubac features over 100 eclectic shops and world class galleries 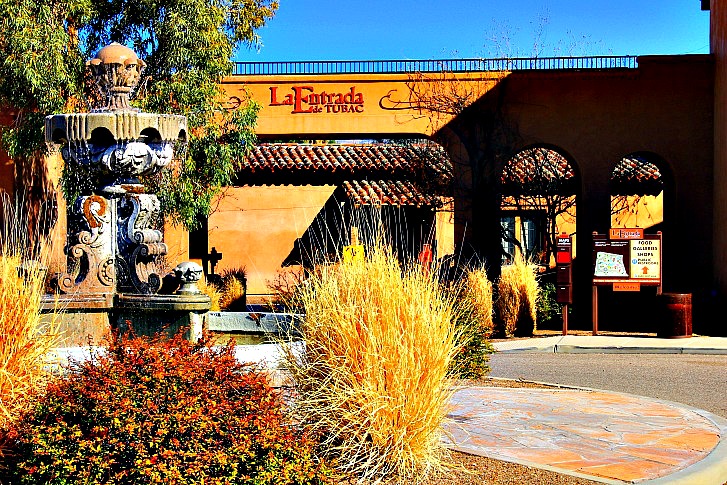 Established in 1752 as a Spanish fort, Tubac is an exquisite, brightly painted town with more than 100 galleries, shops, and restaurants lining its meandering streets. A quaint haven for artists, Tubac was the first permanent European settlement in what later became Arizona.

Driving south from Mission View RV Resort, our home base in southern Tucson, the spiny desert softens and becomes downright pastoral. Cactus-dotted slopes give way to rolling grasslands with mesquite.

Tubac nestles in a high mountain-framed valley on the banks of the Santa Cruz River where water flow is intermittent. Around these parts, even good intentions are enough to create a riparian habitat.

By 1732 nearby Tubac was a vista of Mission Guevavi and a mission farm and ranch by 1738.

The Pima Revolt of 1751, stirred by many grievances during a half-century of Spanish domination, caused widespread destruction. In 1752, Spanish troops defeated an army of 2,000 Pima warriors and established the Presidio of San Ignacio de Tubac (fort), the first European settlement in what would become Arizona.

Fifty cavalrymen were garrisoned at this remote military post to prevent further rebellion, protect settlers from Apaches, or at least try to, and further explore the Southwest.

Repeatedly attacked, the soldiers and settlers abandoned Tubac in 1775 and built El Presidio San Agustín del Tucsón in what is now downtown Tucson.

Tubac was part of the Gadsden Purchase of 1853, and was soon resettled and developed by Eastern entrepreneurs. Charles D. Poston was instrumental in forming the Sonora Exploring and Mining Company, and used the abandoned Commandant’s house as his headquarters. He performed marriages, granted divorces, baptized children, and printed his own money to pay company employees. His company acquired a press in 1859 which printed Arizona’s first newspaper.

Tubac’s population steadily grew until, in 1860, it was the largest town in Arizona. The American Civil War, however, drained the region of troops, leaving it unprotected from Apaches, and Tubac was again deserted. Although the region was resettled after the war, silver strikes in the Tombstone area and the routing of the railroad through Tucson drew development interests away from Tubac, and the town never regained its earlier importance.

Perhaps Tubac’s most famous person was soldier and explorer Capt. Juan Bautista de Anza II. During his tenure at Tubac (1760-1776), Anza led two overland expeditions to the Pacific, resulting in the founding of San Francisco.

Anza’s second expedition to the Pacific coast departed from Tubac on October 23, 1775. Several hundred colonists from the provinces of Sinaloa and Sonora, along with sixty from Tubac, made the trip. Over 1,000 head of cattle, horses, and mules transported food supplies and tools and provided food on the journey.

It was in 1948 that landscape painter Dale Nichols opened an art school in Tubac and the quiet little burg began its evolution into an artist colony.

An historic destination for the arts, Tubac features over 100 eclectic shops and world class galleries, clustered in the village plaza, where old adobes, Spanish courtyards, and ocotillo fences blend with a handful of newer buildings. Meandering streets are punctuated by hidden courtyards and sparkling fountains.

There’s a whiff of emergent Santa Fe here without the crowds. Tubac doesn’t even have a traffic light and I find myself falling into a relaxed rhythm as I wander the district. A half day can easily disappear wandering amongst this wealth of painting, sculpture, ceramics, and photography, as well as unique regional fashion, leather, crafts, antiques, and jewelry.

It’s no wonder the town coined the slogan, “Where Art and History Meet.”