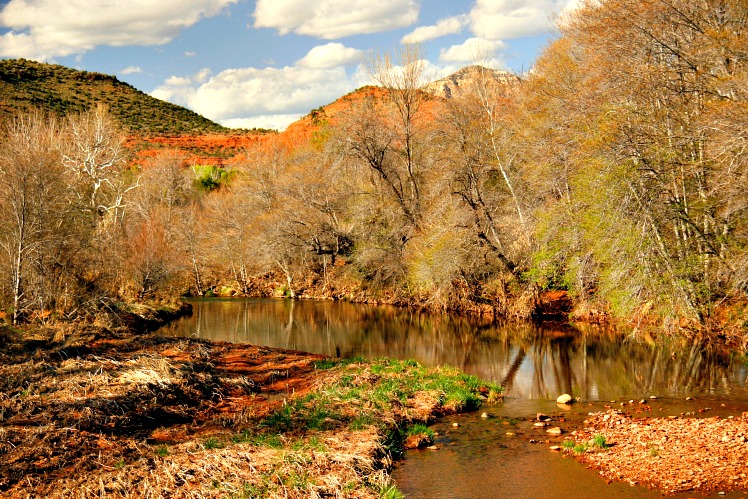 There is no shortage of locations in Arizona that could form a Red Rock State Park, but the chosen location is in Red Rock Country several miles southwest of Sedona along Oak Creek. Here the year-round stream meanders through a low valley creating a diverse riparian habitat abounding with plants and wildlife. For most of the length of the park the creek is split into two channels, and running parallel to part of it is a third, a drainage ditch built early last century to irrigate a nearby ranch.

Heavy rains occasionally cause great floods down the valley. In January of 1993 a combination of several factors produced runoff that reached historically high levels. Heavy, unusually warm rains fell for several days on the deep snowpack in the high country of northern Arizona. Tremendous amounts of debris are washed downstream during these times of high water.

The hillsides 50 feet above the creek are quite different, covered by bushes, cacti, and coarse grass. These hills afford good views of the much higher red rock cliffs to the north and east.

The area is home to Fremont cottonwood, sycamore, velvet ash, and Arizona alder in the riparian areas. The uplands host velvet mesquite, netleaf hackberry, juniper, and a variety of smaller bushes and wildflowers.

Red Rock State Park is a 286 acre nature preserve and environmental education center with stunning scenery. Trails throughout the park wind through manzanita and juniper to reach the banks of Oak Creek. Green meadows are framed by native vegetation and hills of red rock.

Park facilities include a visitors center, classroom, theater, gift shop, picnic tables, 10 developed trails, restrooms, group area with Ramada and facilities, and the former home of Jack and Helen Frye, the House of Apache Fire. The restrooms are handicapped accessible. Camping facilities are not available at this park.

The House of Apache Fire was built by Jack and Helen Frye. Jack Frye was the president of Trans World Airlines and helped design several planes with Howard Hughes before Frye was killed in a 1959 auto crash. Helen kept the house until her death in 1979, when the house was passed on to the religious group Eckankar. The group sold the land and house to a mining company, which traded the land and house to the state in 1986 for another parcel of land. The state park opened in 1991.

The Miller Visitor Center at Red Rock State Park includes an interpretive area, a gift shop, and restrooms. The Junior Ranger and Junior Buddy programs are available for children ages 4-12. There is also a movie theater at the park that shows “The Natural Wonders of Sedona: Timeless Beauty.” The 45-minute video plays on request and covers Sedona’s history and wildlife and takes you on a flying tour of the red rocks providing you with some phenomenal aerial scenes.

Many educational opportunities are available in the Miller Visitor Center including hands-on exhibits based on a biotic communities theme. Panels bring to life the variety of habitats found within the park. Information is also available on the early human inhabitants of the area as well as roving displays showing a wide selection of the park’s wildlife.

The main activity is hiking. Nine trails form a network of routes, mostly on the south side of Oak Creek. All are well marked, with signs and trail maps at each junction. The 5-mile network consists of interconnecting loops, which lead you to vistas of red rock or along the lush greenery of Oak Creek.

The Eagle’s Nest Loop and the Apache Fire Loop are joined together by the Coyote Ridge Trail. Eagle’s Nest is the highest point in the park with an elevation gain of 300 feet. These three major loops are connected along the riparian corridor by the Kisva Trail, which also leads up to the short loop of the Yavapai Ridge Trail. The Javelina Trail takes you into the pinyon/juniper woodlands and back to the other loops.

Red Rock State Park is reached by a 7 mile loop road off US 89A, the middle part of which is unpaved though fine for all vehicles. Only the western entrance is signposted. The road curves around the south side of Scheurman Mountain, passing through bushy, red, rocky land that shelters a few houses, nestled in clearings in the trees or on top of small hills.

In the park a short road leads past two picnic areas to the main parking lot and visitor facilities.