For those who love wildflowers, Peridot Mesa is a must-visit destination in Arizona 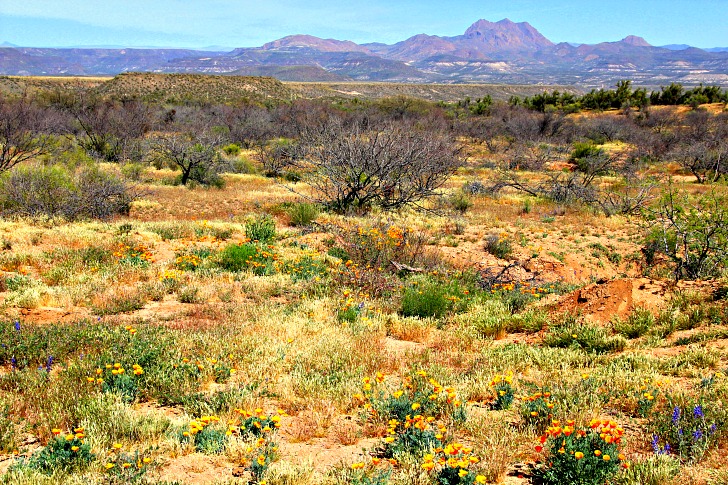 In the middle of the 32,000 acres that are the Salt River Canyon Wilderness, U.S. Routes 60 and 70 are narrow ribbons buckling through the harsh terrain.

By starting in Apache Junction you’ll traverse the 1,200-foot-long Queen Creek Tunnel cutting through the mountain at a 6 percent upward grade. Now you’ll climb 4,000 feet via tight bends, S-curves, and the three consecutive switchbacks plunging into the canyon. The first part of this trip twists through the Tonto National Forest with views of the Superstition Mountains—the second part traverses through the high desert terrain of the Fort Apache Reservation.

The San Carlos Apache Reservation is located 12 miles east of Globe-Miami on Highway 70. Throughout this beautiful land you will find rich Apache culture, hunting, and fishing opportunities, as well as other recreational delights. A tribal land permit is required for activities on tribal lands.

The San Carlos Apache Indian Reservation encompasses 1.8 million acres of pristine land spanning across three regions of mountain country, desert, and plateau landscapes. The rich cultural heritage is as abundant and as rich as the tribal land’s natural resources.

The community of Globe-Miami is rich in copper, culture, and a pleasant climate. Globe was named from the legend of a 50-pound “globe” shaped silver nugget. Numerous antique shops and art galleries are situated in historic downtown Globe. Located in the foothills of the Pinal Mountains at an elevation of 3,500 feet, Globe-Miami enjoys cooler summers than its metropolitan neighbors while still having sunny, pleasant winters.

There is much to see and experience, as the area’s mining history, Old West traditions, and Native American culture offer a wide-ranging Southwestern experience. The historic downtowns, copper mining, the neighboring San Carlos Apache Reservation, and abundant outdoor recreation throughout the Tonto National Forest combine to make Globe-Miami much more than the sleepy community many expect to find. Mining still holds a significant role in the local economy, along with tourism.

Peridot Mesa, about 20 minutes east of Globe, is one of Arizona’s hot spots for wildflower viewing and one of the very first places in the state to kick off the spring wildflower season.

Just past mile marker 268, turn left on a dirt road marked by a cattle guard framed by two white H-shaped poles. It is recommended that you drive a half-mile down this road toward the color. We just parked and walked around and saw poppies, lupines, globemellows, desert marigolds, phacelia, and numerous other flowers along the road and sweeping down hillsides. It was an amazing sight when we last visited.

You need a $10 recreation permit to explore and photograph flowers on the Apache reservation. Buy yours in Globe at the Circle K or Fast Stop convenience stores (both are near the Highway 60/70 crossroads).

Peridot Mesa is the most productive locality for peridot in the world. Peridot is the best known gem variety of olivine, a species name for a series of magnesium-iron rich silicate minerals. This bright yellow-green to green gemstone has caught the fancy of humans for thousands of years. Much of its recent popularity can be explained by its recognition as the birthstone for the month of August. Wearing the stone is supposed to bring the wearer success, peace, and good luck.

The peridot occurs as individual grains and aggregates of grains in a basalt which is about 10 to 110 feet thick that forms the top and sides of Peridot Mesa. On the Reservation, peridot can be mined only by Native Americans from the San Carlos Reservation.