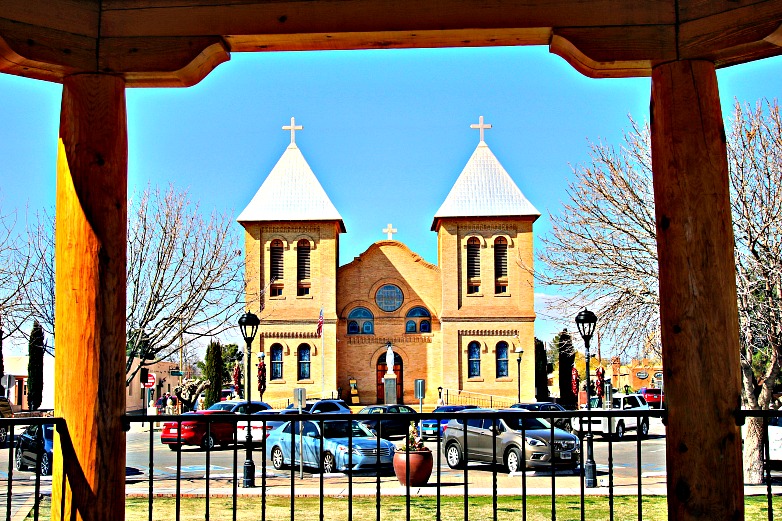 No visit to Las Cruces is complete without a stroll through Old Mesilla. This little town, just two miles southwest of Las Cruces, is steeped in history. Mesilla (“Little Tableland”) is the best-known and most visited historical community in Southern New Mexico.

Mesilla is a small town by today’s standards but 150 years ago it was the largest city between San Antonio and San Diego. By the 1870s, it was the county seat and the Mesilla Valley’s leading center of trade. In addition to El Camino Real, the town’s trade connections were maintained through a variety of stage, freight, and mail routes, including the Butterfield Overland Mail, San Antonio Mail, and Wells Fargo Express. Mesilla hasn’t changed much over the years, allowing visitors to see what a 1800s border town looked like.

In the sixteenth century Apaches and other tribes regularly camped in Mesilla, but it wasn’t until after the Treaty of Guadalupe Hidalgo that ended the Mexican-American War in 1848 that the first permanent settlers came to Mesilla to call it their home. By 1850, Mesilla was firmly established as an outpost of Mexico, but with the signing of the Gadsden Purchase in 1854, the village officially became part of the U.S. Since its beginning, Mesilla has had a major influence on the economic, cultural, historical, and political life of the Mesilla Valley.

From the Gadsden Purchase to the Civil War to the El Camino Real and Butterfield Stage Coach route to the trial of Billy the Kid to being a lively social center in the 1880s—Mesilla has been a prominent part of the rich history of the Southwest. Mesilla was the Old West with outlaws frequenting many of the bars and dances.

From its origins as a simple dirt lot, the plaza has developed through time with paving, landscaping and a replica 1930s-era bandstand, creating a more modern, but no less inviting, social center. The commercial and residential buildings that border the plaza reflect Mesilla’s maturing as a prime location on El Camino Real and on the southern route to California, where gold was discovered in 1849.

On the north end of the Plaza is the Basilica of San Albino, one of the oldest missions in the Mesilla Valley. Originally built of adobe in 1855, that church was replaced in 1906 by today’s San Albino church, a yellow-brick building whose facade is dominated by square belfries with pyramid towers and soaring, arched stain-glass windows.

As the plaza’s primary anchor, San Albino continues to reflect the prominent role of religion in the community’s history. Outside the church is a memorial to parishioners who died in combat. In 2008, the church’s historical importance was recognized as it was designated as one of two basilicas in New Mexico.

Today, Mesilla offers a wide range of events as well as shopping and dining on the town’s plaza. Enjoy a meal at the famous La Posta or Double Eagle, where patrons can enjoy authentic local cuisine while they visit one of the most historical locations in New Mexico.

Many cultural and historical activities are held in the plaza, the Cinco de Mayo fiesta, the 16th de Septiembre Fiesta, and the Dia de Los Muertos (Day of the Dead). On Christmas Eve, the Plaza comes alive with hundreds of luminarias lining streets, sidewalks, and buildings. Every Thursday and Sunday the local Farmer’s and Craft’s market is held on the Plaza.

Today, many of Mesilla’s population of nearly 2,200 residents are direct descendents of Mesilla’s early settlers. Mesilla has a rich and diverse heritage with the integration of Indian, Spanish, Mexican, and Anglo-American cultures. The traditional adobe structures and architectural features modified through time still remain as a reminder of the long and significant history of the town.

So, come stroll the streets Billy-the-Kid and Pancho Villa once walked, check out the shops and find unique Southwestern gifts to take back home. Step inside one of the most historical cantinas in the area, El Patio. Then stop for lunch or dinner at one of the many cafes and restaurants. But, don’t just concentrate on the plaza, drive or walk around the town taking in all the shops and sights the average visitor misses.