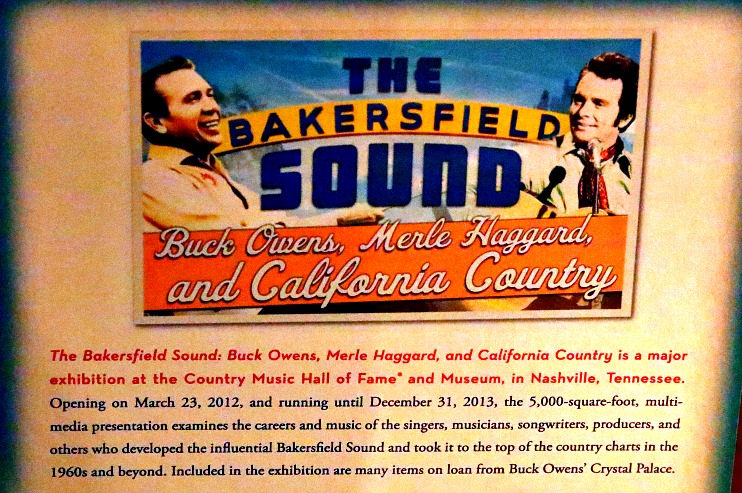 The city gained fame in the late 1950s and early ’60s for the Bakersfield Sound. The sub genre of country music—described as a mix of twangy guitars, drums, fiddle, and steel guitar—was a defiant reaction to the string orchestras and the polished sound of albums being recorded in Nashville during this time.

Oil is what drew people here at the turn of the century. It’s what kept the Okies here fleeing the Dust Bowl in the 1930s. And when they came—nearly doubling Kern County’s population—they brought their hillbilly music with them.

Many musicians and entertainers were involved in making the Bakersfield Sound a global phenomenon, however none were more well-known than Country Music Hall of Fame members Buck Owens and Merle Haggard. Both artists cut their teeth at the bars and honkytonks around Bakersfield before gaining international prominence.

Owens would go on to have a extremely successful entertainment career, charting 21 number one hits including “Act Naturally” and “I’ve Got a Tiger By the Tail.” Owens also spent nearly 17 years co-hosting the popular country-themed variety TV show Hee-Haw.

Haggard, in trouble with the law in his early days, rose to fame with songs like “Okie From Muskogee” and “The Fightin Side of Me” among his 38 number one songs. Both artists have local streets named in their honor.

Perhaps the most popular artist aside from Owens to be influenced by the Bakersfield Sound is Dwight Yoakam. In 1988 Owens and Yoakam collaborated on “The Streets of Bakersfield,” a duet which became Yoakam’s first number one singles hit. Yoakam’s album, Dwight Sings Buck, is a tribute honoring the legacy of Owens and his lasting impact on country music.

Opened in 1996, Buck Owens’ Crystal Palace is a must see for visitors to Bakersfield. The all-in-one restaurant, museum, and music venue spotlights the rich history of the Bakersfield Sound and the career of Buck Owens. The Palace is home to countless items of memorabilia from Owens’ early days to his time as co-host of Hee-Haw and his final years as a living legend. Until his passing in 2006 Owens would perform each weekend to fans that came from across the globe to pay homage to the star.

The Palace is regularly nominated for Nightclub of the Year by the Academy of Country Music.  In 2005 country superstar Garth Brooks proposed to then country singer girlfriend Trisha Yearwood on the Palace stage.

For a comprehensive history of the Bakersfield Sound, a visit to the Kern County Museum is essential for visitors. The permanent exhibit is located inside the main museum building and features costumes, instruments, and memorabilia related to country music in Bakersfield.

I came here looking for something
I couldn’t find anywhere else
Hey, I’m not trying to be nobody
I just want a chance to be myself
I’ve spent a thousand miles a-thumbin’
Yes, I’ve worn blisters on my heels
Trying to find me something better
Here on the streets of Bakersfield