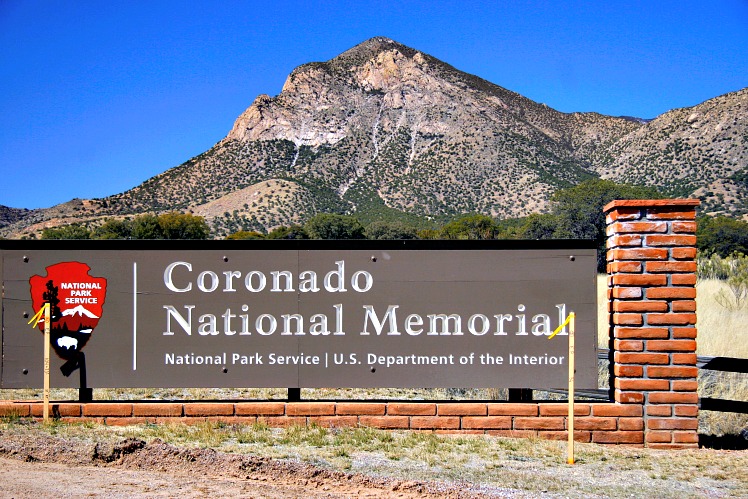 Take Montezuma Canyon Road to the scenic Montezuma Pass Overlook where you can reflect of the impact of the European arrival in this region.

Four major ecosystems meet in Southeastern Arizona: the Sonoran and Chihuahuan deserts, the Rocky Mountains, and the Sierra Madre. This is a beautiful natural area with an unlimited supply of interesting sights to visit.

The San Pedro River valley attracts hikers and birders because of the variety of species that live there. Bisbee is a friendly, funky place to wander and explore. Tombstone trades on a Wild West image. And there are the tens of thousands of sandhill cranes that gather each winter at Whitewater Draw Wildlife Area.

During the early 1500s, Spain established a rich colonial empire in the New World. From Mexico to Peru, gold poured into her treasury and new lands were opened for settlement. The northern frontier lay only a few hundred miles north of Mexico City; and beyond that was a land unknown. Tales of unimaginable riches in this land had fired the Spanish imagination ever since Spain’s discovery of the “New World”.

On January 6, 1540, the Spanish government commissioned Francisco Vázquez de Coronado (1510-1554) to command an expedition to find the rumored seven “large cities, with streets lined with goldsmith shops, houses of many stories, and doorways studded with emeralds and turquoise!”

We have no way of knowing Coronado’s exact route, but historians believe he followed the San Pedro River when he passed through southeastern Arizona in 1540 with about 2,000 men, an army of 336 Spanish soldiers, and hundreds of Mexican-Indian allies. The journey was fueled by more than 1,500 stock animals and blind ambition.

It was a fool’s errand. Coronado died in relative obscurity, his mission a failure. But as we look back his journey seems remarkable, if only because it was so long. He traveled from Mexico City to what is now Kansas on horseback, and was one of the first Europeans to see this part of the country.

The location was chosen for the panoramic views of the United States-Mexico border and the San Pedro River Valley, the route believed to have been taken by Coronado. The creation of the Memorial was not to protect any tangible artifacts related to the expedition, but rather to provide visitors with an opportunity to reflect upon the impact the Coronado Expedition had in shaping the history, culture, and environment of the southwestern United States and its ties to Mexico and Spain.

Situated in oak woodlands on the southern edge of the Huachuca Mountains, the 4,750-acre park offers a visitors center, Coronado Cave, hiking trails, and a scenic drive that culminates at Coronado Pass overlook (elevation 6,575 feet) with breathtaking views of the San Pedro Valley to the southeast and the San Raphael Valley to the west. Note that vehicles over 24 feet in length are prohibited due to steep grades and tight switchbacks.

A short trail leads to the top of Coronado Peak (6,864 feet) with even better views, including south to distant mountains in Mexico. The panoramic view is breathtaking.

From the pass the unpaved and often rough forestry road leads through Coronado National Forest to Parker Canyon Lake (18 miles) and on to Patagonia or alternately through the Arizona Wine Region near the small town of Elgin.

When your spirit cries for peace, come to a world of canyons deep in an old land; feel the exultation of high plateaus, the strength of moving wasters,
the simplicity of sand and grass, and the silence of growth.