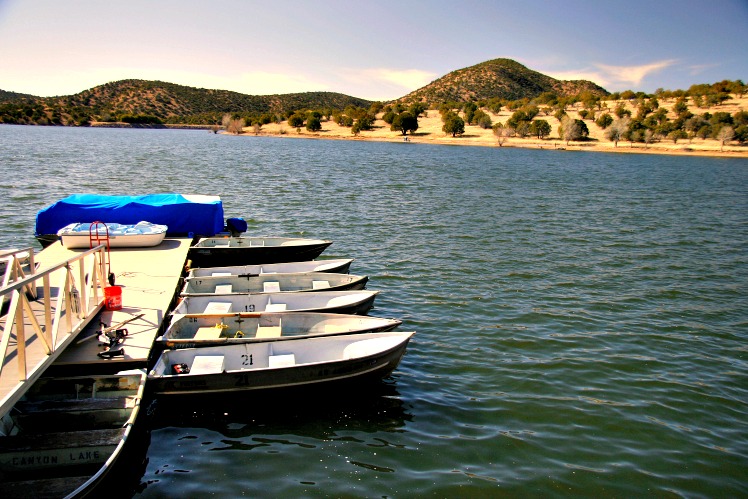 We’re always on the lookout for new adventures and hidden gems, places that are interesting but few people know about, even locals.

It was somewhat by chance that we discovered Parker Canyon Lake. While touring Coronado National Memorial on the southern edge of the Huachuca Mountains in southeastern Arizona, we drove a winding mountain road that culminates at Coronado Pass overlook (elevation 6,575 feet) close to the western edge of the memorial. Note that vehicles over 24 feet in length are prohibited due to steep grades and tight switchbacks.

One of Arizona’s most breathtaking overlooks, the pass offers sweeping views of the San Pedro Valley to the southeast (see above) and the San Raphael Valley to the west (see below) . Interpretive signs highlight the major landscape features looking east and west. On clear days, Baboquivari Peak, at an elevation of 7,720 feet, on the Tohono O’odham Indian Reservation, can be seen 80 miles to the west beyond the Santa Rita and Patagonia mountains.

From the pass we continued west along the unpaved and often rough forestry road that leads through Coronado National Forest to Parker Canyon Lake (18 miles).

Ringed with cottonwoods, juniper, piñon pine, scrub oak, and manzanita, Parker Canyon Lake offers a number of recreational possibilities for those willing to drive the dirt roads that lead to it. Locals say the temperature in the area, which lies about 5,400 feet above sea level, generally runs about 10 degrees cooler than Tucson.

For those who like to fish, Parker Canyon Lake offers both cold and warm water species, including stocked rainbow trout and resident bass, sunfish, and catfish. There is a fishing pier and a paved boat ramp at the lake, as well as a lakeside paved area and a graveled path along some of the best catfishing shoreline.

There is also a concessionaire-operated country store at the lakeshore where you can pick up some last minute supplies, buy a fishing license, camping gear, tackle and worms, or rent a boat.

The lake has a number of side canyons, inlets, and coves that stretch back from the main body of the lake, creating a surprising amount of shoreline.

The Parker Shoreline Trail is a fairly level dirt pathway that, for the most part, stays within a few yards of the water. There are a couple of places, however, where the route climbs rather steeply over high rocky bluffs and the trail becomes a slightly exposed, narrow passage 50 or 60 feet above the lake’s surface.

The Parker Lakeshore Trail offers excellent vantage points from which to enjoy the ducks and other waterfowl that are invariably bobbing on the lake’s clear waters. Some of those points even have benches and interpretive signs. Bald eagles, herons, and osprey are regularly sighted in this area, as are spring warblers and hummingbirds in season.

On the terrestrial side, Coues whitetail deer can be seen browsing among the oaks and grasses that surround the lake and in the two campgrounds near its shores. Coatimundi, javelina, and roadrunners, three animals that are about as southwestern as you can get, make occasional appearances as well.

The easiest place to start this hike is from the parking area near the store and boat launch on the southeast shore of the lake; go counterclockwise. (However, if you just want to go to the dam and back, it’s shorter to go clockwise.) The first 300 yards is a paved, shoreline sidewalk that passes a couple of rest benches—fine places to sit and enjoy the serenity of the area.

As the trail bends west, then north, around the Lakeview Campground area, you’re almost directly across from the dam. Allow more than 2 hours for the fairly easy 4.5-mile loop around the lake.

From Parker Canyon Lake the road continues on to Sonoita (30 miles) or alternately through the Arizona Wine Region near the small town of Elgin.

Exploring the roads less traveled…America is laced with nooks and crannies, good places that go undiscovered by many mainstream travelers.