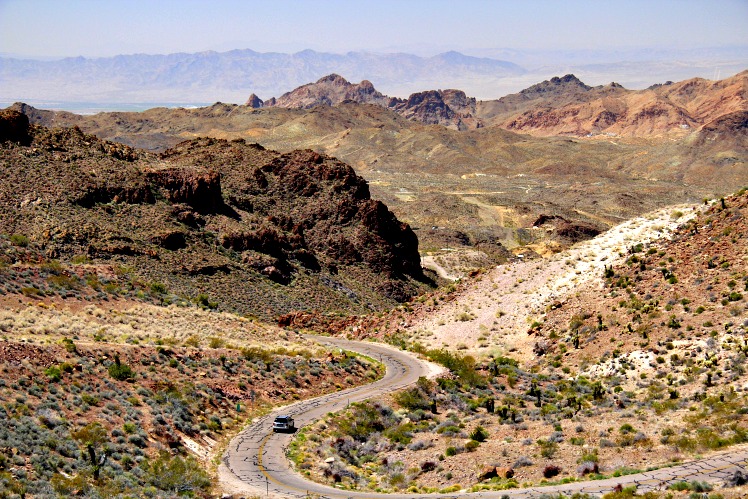 Many of the Grand Canyon State’s most interesting and beautiful roadways unwind after a short detour off the busier roads and Interstate highways. So take the exit ramp to experience four of Arizona’s scenic drives and byways.

Officially Arizona Highway 179, this byway is only 14.5 miles long. But you could spend a whole day exploring the spectacular red rock formations, shops, galleries, restaurants, and other attractions that line this link between Interstate 17 and Sedona.

Get oriented at the Red Rock Ranger District Visitor Center. Then head to the Village of Oak Creek (about five miles south of Sedona) to pick up picnic supplies on the way to Bell Rock and Courthouse Butte. These two beloved and much-photographed landmarks are ringed by hiking and biking trails.

Continuing to Sedona, sculptor Marguerite Brunswig Staude’s Chapel of the Holy Cross is a meditative and powerful retreat, with windows framing buttes and rock outcroppings. At the northern end of the drive, stroll around Tlaquepaque, an architecturally authentic Spanish Colonial village that houses galleries, retailers, and restaurants.

Road tip: A Red Rock Pass ($5/day) is required for vehicles parked on National Forest land around Sedona and Oak Creek Canyon. If you plan to park and explore on foot, pick up a pass and display it on the dash of your RV or toad.

On this winding 41.5-mile road, just off U.S. Highway 60 near Mesa, designate a driver to keep their eyes on curves and hairpin turns while passengers “ooh” and “ahh” over the lakes, mountains, and canyons in Tonto National Forest’s wilderness areas.

Part paved and part well-graded gravel, Arizona Highway 88 was an old stagecoach route that shuttled in supplies for Roosevelt Dam’s construction in the early 1900s. It begins near Goldfield Ghost Town, a re-created Wild West town, complete with gunslingers. You’ll pass Canyon Lake, where you can cruise on the Dolly Steamboat.

Road tip: Due to its narrow width and tight turns, this route is not recommended for larger vehicles including RVs.

Starting near Vail on Interstate 10, pick up this 52-mile drive south on State Route 83 through the Santa Cruz River Basin of southeastern Arizona.

In Sonoita, visit the nearby wineries of Arizona’s burgeoning wine country. Then connect back with State Route 82 heading south and watch the landscape morph from rolling grasslands to cottonwood stands and juniper forests.

In Patagonia, wander the town’s charming coffee shops and retailers. Or bring your binoculars to spot wildlife at the Patagonia-Sonoita Creek Preserve, a popular birding spot that’s home to more than 300 species of birds. Continue on to Patagonia Lake State Park where visitors hike, swim, fish, and camp while taking in the lush landscape of the surrounding hills.

A visit to the old powerhouse which has been converted to a Route 66 Museum and visitor’s center is a must when in Kingman. The Powerhouse Building is also home to Arizona’s Route 66 Association.

From Kingman, take the 28-mile scenic drive through the Black Mountains to Oatman. Once a gold-mining boomtown, Oatman hunkers in a craggy gulch of the Black Mountains. Rising above town is the jagged peak of white quartz known as Elephant’s Tooth.

A shadow of its former self this living ghost town offers a handful of historic buildings and photo opportunities, costumed gunfighters and 1890s style ladies. Burros from the surrounding hills wander into Oatman daily and mosey around town blocking traffic, greeting visitors, and chomping carrots sold by the local shop owners.