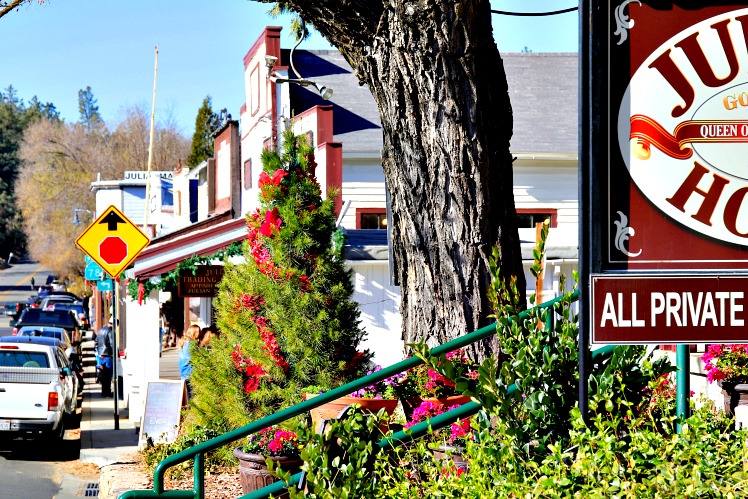 Julian is a year-round getaway for the day, a weekend, or longer. Julian is also well-known for its famous homemade apple pie served year-round.

Born during the 1870s gold rush, Julian is a small town cradled in the mountains, surrounded by apple orchards.

Julian is at its most charming―and busiest―during the fall, when leaves change color and local apples ripen. Stop by an apple orchard to sample local varieties not found elsewhere, pick up some of your favorites, or pick your own. Any time of year, Julian cafes serve apple pies and sell whole ones.

On a recent visit to Julian, we bought four pies, one each at Julian Pie Company, Mom’s Pies, Julian Cafe, and Apple Alley Bakery. It’s all for the sake of science; taste testing required to determine a favorite. They’re all so good I’ve been unable to identify a favorite.

A locally owned family business specializing in apple pies and cider donuts, Julian Pie Company has been producing its stellar pies since 1989 and bakes traditional apple pies, plus variations of apple with cherry, boysenberry, raspberry, blueberry, strawberry, or rhubarb. You can also order pecan pies and pumpkin pies or a pie with an all fruit filling that doesn’t include apple.

The Julian Pie Company is housed in a small building that looks like a house off of the main street in Julian. There are outdoor picnic tables to enjoy your slice of pie on or a row of tables indoors. If eating at the store, try a scoop of Julian Pie Company’s cinnamon ice cream to go with your pie. You can also try ordering your apple pie with melted cheddar cheese on top.

The Julian Pie Company became a reality for Liz Smothers in September of 1986. It all started when she and a neighbor began peeling apples for a local pie shop where she was soon employed to bake and sell pies. Tim, her son worked after school rolling dough.

Recognizing her expertise, two other pie shops hired her to bake for them. While Liz enjoyed the activity and baking for the pie shops, she had a desire to be creative on her own and not merely bake someone else’s pie. With the assistance of a friend and emphasis on quality control and clean, neat surroundings, the Julian Pie Company began.

With a growing demand for pies in local markets, the need to expand the production resulted in the opening of the Santa Ysabel facility in 1992. They now deliver pies to San Diego and Riverside counties as well as ship pies throughout the U.S.

Located on Main Street, Mom’s Pie House is indeed owned by a “mom” who has lived in Julian for over 30 years and has been baking using Julian apples since 1984. All the pies at Mom’s are baked fresh. The entrance to the shop is a long corridor that takes you past the open kitchen and into a cozy dining area where you can enjoy your slice of pie.

The shop is known for its excellent crusts, of which it makes two—the Flakey, a pastry-style crust, and the Crumb, which is sprinkled on the top of the pie instead of being rolled on.

Mom’s Pie House has many variations of apple pie, including the Apple Caramel Crumb Pie and Apple Sugar Free Pie. You can also get apple boysenberry or apple cherry pies with either the Flakey or Crumb crust. Mom’s also serves up pecan, pumpkin, rhubarb, cherry, and peach pies.

Julian Café and Bakery is a small restaurant housed in a cozy log room. You can eat at the restaurant for some good comfort food like meatloaf or country fried chicken, followed by a slice of pie. Or, just step up to the pie ordering window for a pie to go.

Owned and operated by a husband and wife team, this little bakery serves up apple pies made fresh each morning. The interior has a cabin feel with ample seating. There are also tables outdoors for those who want to enjoy their pie in the crisp Julian air.

Apple Alley Bakery has some fun twists on their apples pies including a Mango Apple Pie and a Caramel Apple Pecan Pie.

Pie, in a word, is my passion. Since as far back as I can remember, I have simply loved pie. I can’t really explain why. If one loves poetry, or growing orchids, or walking along the beach at sunset, the why isn’t all that important. To me, pie is poetry that makes the world a better place.