Pralines, the sweet pecan candy with a buttery, brown-sugar smell 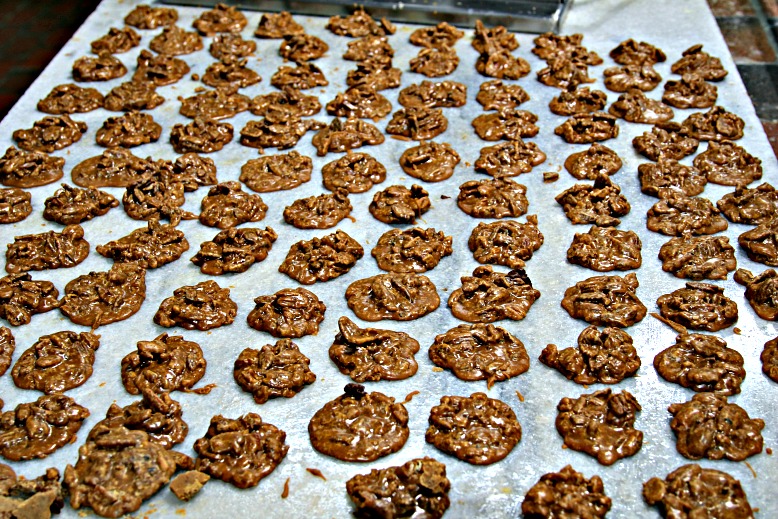 Cultural influences played a factor in the innovation of the candy in the American South. French settlers introduced their version in Louisiana where sugarcane plantations were a dominant industry and pecan trees were prevalent.

The original praline was a 17th-century French dessert described as “almonds coated in boiled sugar.” According to popular accounts, they were originally created by the cook to French diplomat of César, duc de Choiseul, comte du Plessis-Praslin, a 17th-century sugar industrialist and were called “praslin.”

Some believe the comte had his cook devise an almond-studded candy to woo his various love interests. Or perhaps it was his butler who created the treat to cure Praslin’s painful indigestion or a clumsy young apprentice who knocked over a container of almonds into a vat of cooking caramelized sugar.

The praline that emerged in the South was markedly different from its contemporary European counterpart. African-American cooks working for French colonists adapted the recipe by using native Louisiana pecans and adding cream. Voilà, the velvety, sugary pecan patty was born.

It is believed that pralines were brought over from France by the Ursuline nuns who came to New Orleans in 1727. They were in charge of the casket girls, young women sent over from France at the request of Bienville to marry New Orleans colonists. They were called casket girls (les filles a la casette) because each came to the city furnished with a casket-box filled with all their worldly possessions.

The nuns instructed the casket girls to be upstanding women in society as well as good wives to the settlers and in the course of their scholastic and domestic educations the girls were taught the art of praline making. Eventually the casket girls were married off and began to settle throughout southern Louisiana.

In his 1919 book about pecans, the agricultural historian Rodney Howard True called the crop “America’s most important contribution to the world’s stock of edible nuts.” Native peoples consumed pecans before Europeans arrived in America but the pecan’s history as a harvested nut is linked to a formerly enslaved Louisianan named Antoine.

The University of Georgia professor Lenny Wells wrote in his book, Pecan: America’s Native Nut Tree, that the nut had been harvested and perhaps even sold for centuries but that it was not viewed as capable of being industrialized. That perception shifted in 1846, Wells wrote, “thanks to the skill of a slave.” Antoine’s ability to produce high-quality nuts came through mastering the perfect combination of grafting partners to consistently produce premium nuts.

By the mid-1800s, pralinieres were selling the candy in the French Quarter. Today, New Orleans tourists find it hard to leave the city without boxes of pralines.

The Texas history of pralines is no less evocative. According to culinary historian MM Pack, the Texas praline’s ancestry came both from the east (New Orleans) and from the south (Mexico). Both France and Spain brought their sweet tooth to the New World “more or less at the same time,” Pack said. The pecan-candy traditions—pecans because they were plentiful and free—found a welcome home in Texas where industrious Mexican immigrants could make money from candy that was relatively cheap to produce.

Pack cited the Texas-Mexican history of the border town candyman (men selling sweets from carts and baskets) as a natural link for pecan candy at Tex-Mex restaurants.

Beginning in the early 1900s, pecans became a source of income for Mexican immigrants who gathered, shelled, and dried them. Pecan candy soon became a tradition. Mexican-American know-how for pecan pralines found its way into Tex-Mex restaurants where Mexican candies—dulces—were sold.

Being a thriving port city, people from all over the world came through New Orleans to the rest of the country and the praline spread with them. Nowadays most people are unaware of the candy’s historical origin, and the praline is thought of as a southern confection not necessarily specific to New Orleans. Some believe the pecan praline is a Texan candy, whereas others assume it came from Savannah.

The pronunciation of the candy is a point of contention as well. In New Orleans and along the Gulf Coast where there are many communities settled by the French, the pronunciation is prah-leen with the long aaah sound which is closer to that of the candy’s namesake du Plessis-Praslin. Other regions of the country including parts of Texas and Georgia have anglicized the term and pronounce it pray-leen. However you say it, they taste the same. Other terms for pralines include pecan pralines, pecan candy, plarines, and pecan patties.

I make a mean pecan pie and I have a great recipe for pralines—also using pecans. Pralines take a lot of patience, and patience is a must in the duck blind as well as in the kitchen. Good things come to those who wait.