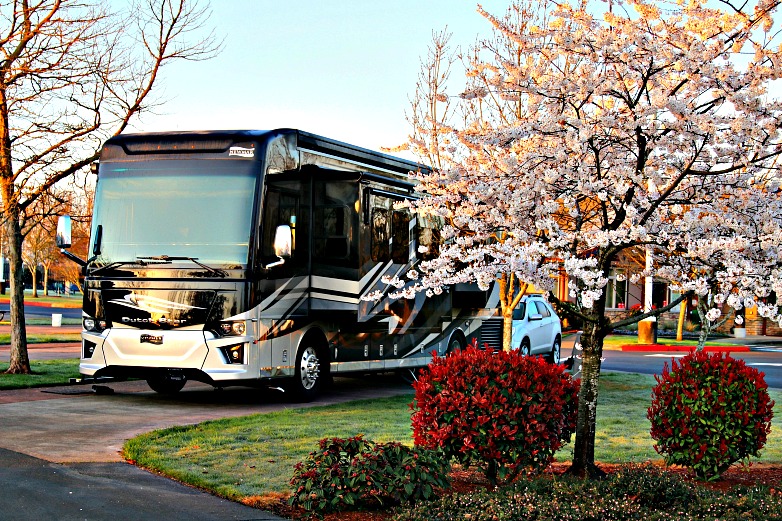 First of all, the good news is that most RVers are prepared for national emergencies such as the the COVID-19 (coronavirus). That said we know the wave after wave of news updates, stricter camping and travel guidelines rolling out across the U.S. and Canada, and the associated stress are not things we often encounter as RVers.

When national, state (and in Canada, provincial), and local governments issued stay-at-home orders shutting down many private and public campgrounds and public lands an estimated one million to two million full-time RVers were potentially left homeless. Across Facebook full-time RVer groups the sense of fear and panic was obvious.

Full-time RVers consist of thousands of construction, energy, and medical workers, living mobile out of necessity for their jobs, as well as seniors and folks who sold their “sticks-and-bricks” homes to live a nomadic lifestyle.

A week after inviting RVs to camp in Winton Woods, Great Parks of Hamilton County (Ohio) ordered them gone by Thursday (April 2). No exceptions. Great Parks made this call Sunday afternoon to match moves the state made last week: closing all campgrounds to slow the spread of coronavirus. Great Parks had shut down campground cabins and bathrooms more than a week earlier but allowed self-contained RVs to stay. Until they didn’t! That put people in RVs in limbo again, some for the second or third time. Private RV parks like nearby Lebanon KOA are limiting space while wondering how long before the governor shuts them down, too.

One of the challenges full-timers face in securing a camping site is the lack of clear and uniform directives between states and within localities. For example, some campgrounds can accept long-term visitors while others, depending on the municipality, cannot.

Virtual communities also have taken up the cause in connecting full-timers with open campgrounds.

And many Canadian snowbirds are finding they have no place to land. The early return because of coronavirus fears has left thousands of RVers stranded. The snowbirds were heeding the federal government’s call for Canadians to return home from the U.S. and self-isolate themselves for 14 days in the midst of the COVID-19 emergency.

But as they neared the border one problem became increasingly clear: They had nowhere to go. Thousands of stranded RVers many who have no brick-and-mortar residences have been calling RV parks and campgrounds all around the country looking for vacancies. Either they’re not open or they’re open and they’re already full or not accepting new RVers due to the fear of further spreading the virus.

Part of the problem is that the vast majority of Ontario’s 420 or so private campgrounds are prohibited by municipal statute from opening the season until May. And the few that do operate year round have not been listed as essential services by the province so it’s unclear whether they’d be allowed to take in new RVers.

National and provincial parks—another potential refuge for returning snowbirds—are closed until April 30 at the earliest. The mandatory isolation order and the parks not being open are terrifying for many.

We found ourselves in a similar situation when the RV Park at which we had made reservations informed us that they had cancelled our reservation. We were left scrambling as we contacted dozens of parks. Finally due to a recent cancellation an RV park was willing to accept us.

While tenting is still the primary form of camping for most people, the data reveals that 24 percent (or 1.8 million individuals) camp in an RV. They come into outdoor settings bringing their own living quarters with them which are fully self-contained units that house everything they need to sustain life including their living rooms, kitchen, bedrooms, and their own bathroom, and hopefully in present days…their own toilet paper.

Nothing in life is to be feared, it is only to be understood. Now is the time to understand more, so that we may fear less.