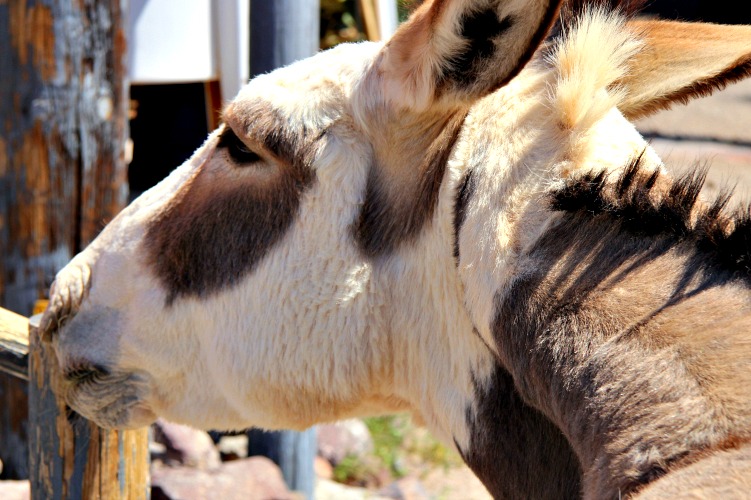 Here is our plan: We’ll drive to a town that shouldn’t exist. We’ll travel a twisted ribbon of pavement along Historic Route 66.

Once a gold-mining boomtown, Oatman hunkers in a craggy gulch of the Black Mountains, 28 miles southwest of Kingman. Rising above town is the jagged peak of white quartz known as Elephant’s Tooth. Often described as a ghost town, Oatman comes close to fitting the category considering that it once boasted nearly 20,000 people and now supports just a little over 100 people year-round.

Oatman has about 40 gift, antique, and craft shops, two Old Time Photo Shops, Judy’s Bar, assorted ghosts, and several places to eat and listen to live music. Though Oatman is only a shadow of its former self, it is well worth a visit to this living ghost town that provides not only a handful of historic buildings and photo opportunities but costumed gunfighters and 1890s style ladies as well as the sights of burros walking the streets.

The burg’s most famous residents are its four-legged ambassadors. Burros from the surrounding hills wander into Oatman daily and mosey around town blocking traffic, greeting visitors, and chomping on alfalfa squares sold by the shop owners.

When the burros are in the middle of the road (which they frequently are), they have the right of way. Cars have to wait, no matter how long it takes. No honking, revving engines, or doing anything else to encourage them to move along.

No matter how tame they seem, the burros are wild animals. Use caution and common sense when feeding them. Do not feed junk food to the burros. Also, it’s best to leave Rover at home. Many burros consider the family pooch nothing more than a coyote with connections. The burros are descendants of animals used by miners and abandoned when the ore played out.

Oatman owes its place in history to two miners who struck it rich in 1915, uncovering more than $10 million in gold. A tent city soon sprang up as other miners heard of the gold find and flocked to the area; within a year, the town’s population grew to more than 3,500.

By 1930, it was estimated that 36 million dollars worth of gold had come from the mines. The town boasted two banks, seven hotels, twenty saloons, and ten stores. The town’s name is attributed to Olive Oatman, a young girl kidnapped by Indians and eventually rescued and returned to her family.

More modern events add to the allure of the tiny town, the most famous of which is a visit by Clark Gable and Carol Lombard who spent their honeymoon in the Oatman Hotel in 1939. The well-used building, listed on the National Historic Building Registry, continues to attract visitors today. The Oatman Hotel is a great stop for lunch. The restaurant has killer buffalo burgers and the walls (and even parts of the ceiling) are covered with dollar bills.

If you notice folks clustering in the street without a ravenous burro in sight, it signals an impending gunfight. Gunfighter groups stage shootouts at various times throughout the day.

When the mines shuttered, the stream of traffic along Route 66, the main route from the Midwest to California, kept Oatman alive. Then in 1952, Interstate 40 was constructed from Kingman, Arizona to Needles, California, bypassing this stretch of mountains. Oatman barely hung on.

In the ’70s, Laughlin, Nevada started up; and in the late ’80s, Route 66 became a popular destination for tourists from around the world. Today, a half-million people visit this historic outpost each year. Not bad for an old ghost town off the beaten path. The town just waited for the world to come back around.

Folks start to roll out of town in late afternoon. Even the burros clock out and mosey back into the hills.

Oatman is a day trip full of surprises—of ghost towns and ghost roads, and wild burros. And one of the most scenic drives in the state. Now that’s something to bray about.

So many ghosts upon the road,
My eyes I swear are playing tricks;
And a voice I hear, it’s Tom Joad,
Near Oatman on Route 66.