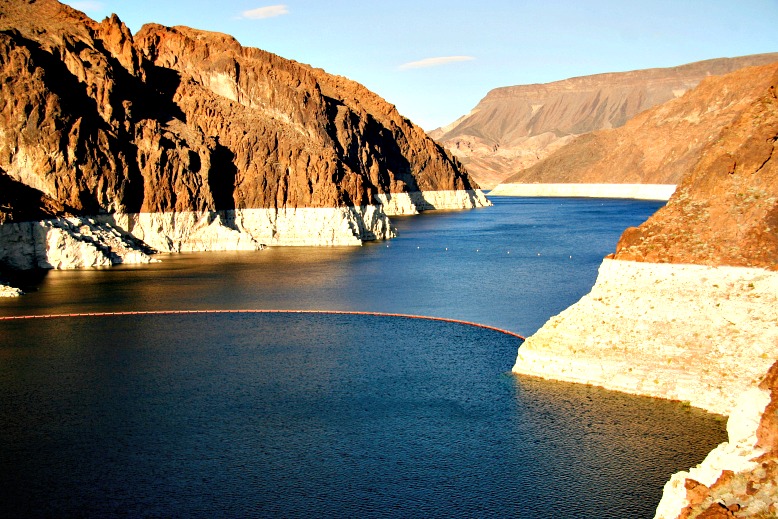 The Colorado River is dammed on both sides of the Grand Canyon, forming two huge artificial lakes: Lake Powell and Lake Mead.

Lake Mead National Recreation Area is big, it’s diverse, and it’s extreme. Temperatures can be harsh, from 120 degrees in the summer to well below freezing in winter on the high plateaus.

From the mouth of the Grand Canyon, the park follows the Arizona-Nevada border along what was formerly 140 miles of the Colorado River. The main attraction here are the two large lakes: Mead and Mohave.

Lake Mead is impressive: 1.5 million acres, 110 miles in length when the lake is full, 550 miles of shoreline, around 500 feet at its greatest depth, 255 square miles of surface water, and when filled to capacity, 28 million acre-feet of water.

Sixty-seven-mile-long Lake Mohave, formed by Davis Dam near Bullhead City, still retains in its upper reaches some of the character of the old Colorado River. Literally millions of people use Lake Mead National Recreation Area each year with many of these visitors returning again and again to find that special cove, or campground, or just to sit on the shore and enjoy solitude of a quality that only nature can supply.

Although much of Lake Mead can only be experienced by boat, a variety of campgrounds, marinas, lodges, and picnic areas around the lake make it possible for non-boaters to also enjoy the recreation area. Most activities are concentrated along the 20 miles of the southwest shore, close to Las Vegas.

Named after Dr. Elwood Mead, Bureau of Reclamation Commissioner from 1924 to 1936, Lake Mead began filling in 1935 following the completion of Boulder Dam, later designated the Hoover Dam after the 31st president, across the river at Black Canyon, 25 miles from Las Vegas.

Indeed, it was the construction of the dam and the arrival of thousands of workers which prompted the legalization of gambling in Nevada and the consequent growth of the city.

The scenery is impressive enough—clear blue water beneath gaunt rocky cliffs, but much can only be appreciated using a boat as the majority of the innumerable sheltered coves and flooded canyons, often with clean, empty beaches for camping, are quite inaccessible by road.

There are very few maintained trails though hiking opportunities are numerous. Most are cross-country, off-trail routes—destinations include narrow canyons, rock art sites, springs, and rock formations.

There are numerous access points to the shoreline especially the section northwest of Hoover Dam in Nevada which has numerous beaches, camping areas, and marinas.

The Northshore Road (NV-16) parallels the water for 40 miles passing through a colorful and  empty desert environment with numerous side roads leading towards the water of which three are to developed marinas: Callville Bay, Echo Bay, and Overton Beach, though this latter is currently closed due to low water levels.

But the most visited section of Lake Mead is that closest to Las Vegas. Facilities include two large marinas at Boulder Beach and Las Vegas Bay, plus campgrounds, beaches, picnic areas, and the main National Recreation Area visitor center.

The west side of Lake Mead has a number of free primitive campsites along tracks forking off Northshore Road, for example at Stewarts Point, near Overton Beach at the north end of the lake. Here, camping is allowed on a large area of the shoreline, which is flat, sandy, and sheltered.

A variety of camping experiences are also available around Lake Mohave including Cottonwood Cove, Katherine Landing, and Willow Beach.

A lake is the landscape’s most beautiful and expressive feature. It is earth’s eye, looking into which, the beholder measures the depth of his own nature.