Gold! The cry went up from Sutter’s Mill and brought tens of thousands stampeding into California from the four corners of the world. 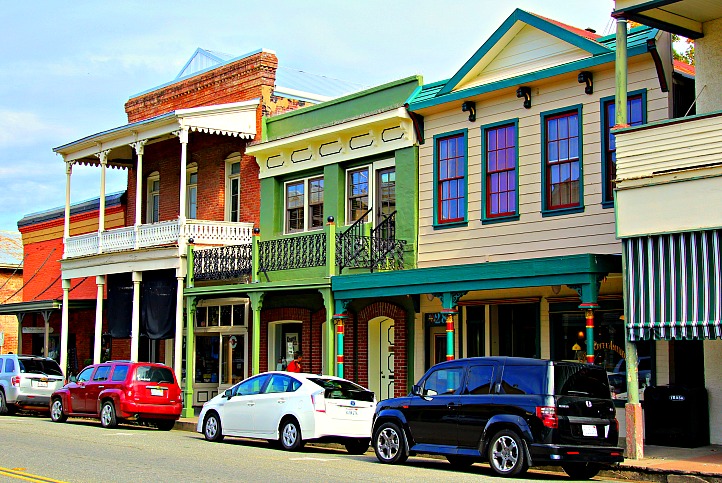 COVID-19 (Coronavirus) has impacted RV travel right now. As RVers, travel is our way of life and, if you’re like us, you’re feeling the frustration of being limited to one location without the freedom to travel. 2020 is certainly presenting new challenges and now, more than ever, we realize that the freedom to travel is something we can’t take for granted. Now is a great time to start thinking of places you’d like to go—especially bucket-list destinations.

The discovery of gold at Sutter’s Mill in 1848 changed the course of California’s and the nation’s history. Although most of the mining camps faded after the mines closed, tourism has brought some of them back to life.

One of California’s smallest incorporated cities, with a population of just over 200 residents, Amador City is a little city with a lot to offer.

The Imperial Hotel (from 1878) affords visitors an opportunity to stay the night and enjoy Amador City’s Gold Country small town way of life.

It all started several hundred yards upstream from today’s town site. Jose Marie Amador, a wealthy California rancher, mined along this nameless creek in 1848-1849. There, gold outcroppings were discovered on both sides of the creek. The Original or Little Amador Mine and the Spring Hill Mine were probably the county’s first gold mines. Soon, the creek, the town, and a new county carried Amador’s name.

As the “easy” gold was mined out on the upper part of the creek, mining and encampments gradually moved to South Amadore where French Gulch flows into the creek. This is the current site of Amador City. Founded in 1853, the Keystone Mine was the city’s most famous gold mine and a major reason for the town’s growth. It reached a depth of 2,680 feet and before closing in 1942 produced an estimated $24 million in gold.

Keystone’s early years were plagued with production and ownership problems; luckily, a rich new vein was discovered in 1866, enabling the mine to yield a monthly gold production average of $40,000, making the Keystone one of the most lucrative California mines. In those days there were an estimated four to six thousand residents in Amador City.

Amador City’s oldest structure, built around 1855, is the center portion of the Amador Hotel. Up Main Street is the stone Fleehart Building (now the Whitney Museum) was the Wells Fargo Building and dates from the 1860s.

The town takes its name from the creek, and the creek takes its name from John A. Sutter. Sutter owned the saw mill in Coloma where the first Mother Lode gold was found in 1848. Unable to stop the tide of gold-seekers flowing over and destroying his lands, Sutter decided to follow the call of gold, trying in vain to recoup what the Gold Rush had taken from him. He arrived where Sutter Creek is currently located in 1848, and upon finding a likely spot, began mining along the creek.

A small settlement began to grow, centered around a cloth tent where the miners met on rainy Sundays. The place eventually took the name of its most prominent citizen, and was called Sutter’s Creek, Sutter, Sutterville, and finally, plain old Sutter Creek.

But Sutter wasn’t a miner, and many of the other miners in the area didn’t much approve of his using servants to dig for gold. He left the area a short while later, returning with his men to Sutter’s Fort in Sacramento. Sutter would never mine again.

Sutter Creek achieved prominence as the supply center for the many mines that circled the town. It was hard rock mining more than placer mining that helped the town to boom. Mines owned by Alvinza Hayward (the Gold Country’s first millionaire), Hetty Green (at one time the country’s richest woman), and Leland Stanford (at one time California’s governor and the founder of Stanford University) included the Union Mine (later renamed the Lincoln Mine) and the Old Eureka Mine. Sutter Creek remained a full- fledged mining town, boasting some of the best producing deep rock mines in the Mother Lode.

Today, the town’s locals mine the visitors who come from around the world, drawn by both history and small town hospitality.