Is it the natural splendor or the metaphysical vibe that makes Sedona such a rejuvenating escape? 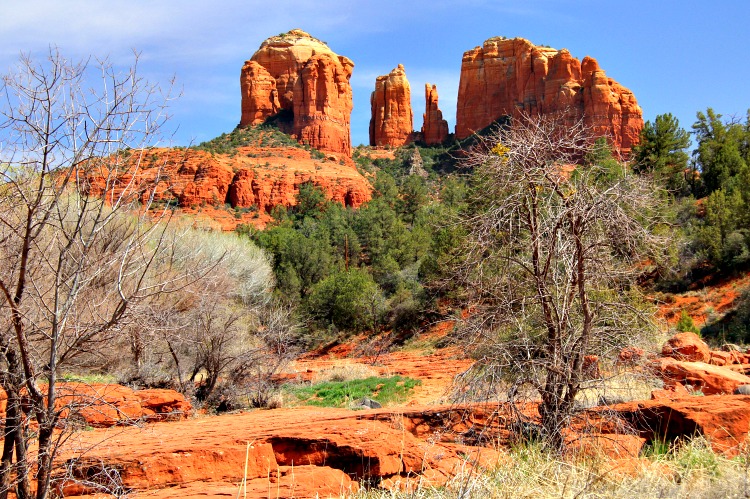 We’re thinking about all the places we’d love to take our RV once the lockdown comes to an end. Looking for a place to heal and hope…when you’re ready?

Sedona is a well-known hotbed of energy—one that’s conducive to both meditation and healing—and this is one of the reasons 4.5 million travelers flock here annually. That and the region’s red rocks: stunning sandstone formations that jut upward thousands of feet and change colors from orange to rust to crimson as the sun passes through the sky.

But the city’s reputation as a New Age hub also defines it.

To preserve its beauty, this city of just over 10,000 people has a strict building code and zoning laws: Structures can’t grow too high and must be colored in hues that complement the natural tones of the red rocks. Even the golden arches at McDonald’s are turquoise here to enhance the desert’s natural beauty.

This splendid geology attracts outdoor enthusiasts, myself included, who love the area. But many visitors to Sedona come looking for something in addition to this beauty. Native American legend recounts a spot where the earth’s energy is concentrated and crackling, a place where you can experience a range of sensations that encourage self-healing and spiritual awakening.

Stop in at any souvenir shop along uptown Sedona’s main street and you’ll be inundated with polished gemstones and handmade dream catchers. Want a psychic reading? Pick from myriad places. There’s also no shortage of tour companies ready to whisk visitors—believers and skeptics—to Sedona’s four main vortices, pockets of “spiraling spiritual energy” said to create a sense of heightened awareness that can only be achieved in a few locations worldwide.

Even if you’re not an adherent of the New Age movement, plan on visiting at least one of Sedona’s famous vortexes. They’re at some of the most gorgeous spots around town. Vortexes (the proper grammatical form “vortices” is rarely used here) are thought to be swirling centers of energy that are conducive to spiritual healing, meditation, and self-exploration. Believers identify four primary vortexes: Boynton Canyon, Bell Rock, Cathedral Rock, and Airport Mesa.

The supposed healing power of vortexes gained popularity during the late 20th century. In 1987, some 5,000 believers flocked to Sedona for what became known as the Harmonic Convergence. The event began as an interpretation of the Mayan calendar; tens of thousands of people around the world gathered around spiritual centers for meditation to protect the Earth from spinning away into space.

While praying for a global awakening, many of those who came to Sedona developed a feeling of deep, astral connection to the red rock formations. Word of Sedona’s mysterious vortexes began to spread.

One of Arizona’s most popular tourist attractions beyond the Grand Canyon, Sedona has long been on my list of sites to explore, but I’ve found myself rolling my eyes whenever someone mentions its metaphysical qualities. Sedona is a spiritual power center? Sure it is. Its energy rejuvenates you? Uh-huh. So rather than get bogged down clearing chakras (energy centers of the body) and attending talks on past-life regression, I decided to do Sedona my own way—beginning with an afternoon trek.

It wasn’t until we departed our home base in nearby Camp Verde the following day that I truly recognized—and appreciated—Sedona’s real appeal. A place with so much natural beauty, one in which you can hike through a forest, climb a towering butte, and take in sights unavailable in urban areas. Relaxation comes with the territory.