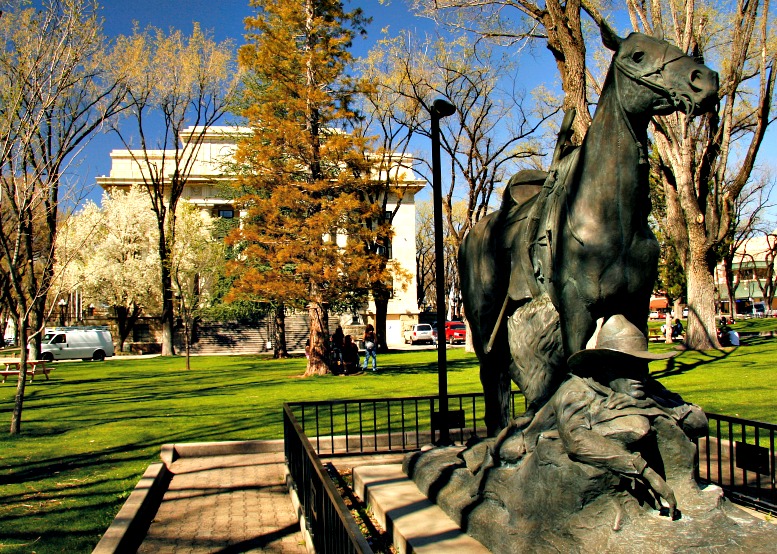 If for you these last few months stuck in coronavirus quarantine have felt a little weird, you’re not alone. For me, April seemed to take forever. Now, in May, I can’t remember what day it is half the time. I’m starting to feel like I’m enduring a perpetual time loop, reliving the same day over and over.

Today is Tuesday. I think. As we pack up the RV and head out on a road trip for Prescott to explore “Everybody’s Hometown”.

Nestled in a stunning mountain bowl and surrounded by one of the largest ponderosa pine forests in the West, the beautiful town of Prescott is steeped in history with an authentic taste of western heritage. Unlike most towns in the West that occurred haphazardly by the promise of cheap land, the availability of water, or the craze of prospectors or speculators, Prescott was designed as a proper city from the beginning.

Miners prospecting for gold first settled this area. It was that presence of gold that prompted President Lincoln to designate Arizona as a territory in 1863. The cash-poor Union was two years into the Civil War.

Lincoln dispatched a contingent of loyal Midwesterners and New Englanders to build the territorial capital here in the north-central part of the territory. This was a political play, as he wanted to keep the Arizona Territory in the Union camp. He definitely did not want governing power in its southern reaches—namely Tucson, 200 miles south—where Confederate sympathies prevailed.

In 1867 with the war over, Arizona’s capital finally shifted to Tucson. It moved back here later, but shifted permanently to Phoenix in 1889.

Thus Prescott was created and by outsiders from back east. It was their prim, aesthetic temperament and sense of decorum that forged the town’s character which continues strong to this day.

With shaded trees, well-kept yards, and Victorian houses of an earlier era, Prescott seems the idealized small town. Courthouse Plaza, dominated by the 1916 Yavapai County Courthouse, works for me as the classic town square—the centerpiece of Anytown, USA. In the evenings, people show up here to read, stroll, play on the grass, or just sit and talk.

While walking around the Courthouse Plaza, we encountered the bronze statue of Captain Bucky O’Neill, a Rough Rider, sitting astride his mount. Created by noted Western sculptor Solon Borglum, brother of the creator of Mount Rushmore’s four notable presidents, this memorial to the Rough Riders has been called one of the finest equestrian bronze sculptures in the world. Locals refer to it as the “Bucky O’Neill statue” in honor of a former mayor who died at the Battle of San Juan Hill in the Spanish-American War.

Beneath the statue, etched in cement, a time line denotes past historic events, such as: 1869, John Wesley Powell explores the Grand Canyon; 1945, World War II ends; and 1912, Arizona achieves statehood.

On one side of the Court House Plaza is Whiskey Row. It’s more sedate now than it was prior to 1900 when the whiskey flowed and the faro tables were jammed 24 hours a day in its forty or so saloons.

In spite of its “proper” beginning, Prescott was a cowboy town. In the early 1900s, there were some 40 saloons along the wooden sidewalk of Montezuma Street. The Palace Saloon was one of them. It is still here, serving whiskey and beer at the oldest bar in the state.

John C. Fremont, the storied Western explorer and Civil War general was the territorial governor here for five years. Fremont’s home has been moved to the site of the Sharlot Hall Museum. Prescott boasts 525 buildings listed on the National Register of Historic Places. Several important structures forming part of the Sharlot Hall Museum complex—two blocks from the Courthouse Plaza—were relocated there to save them from destruction.

We wandered the complex visiting the governor’s mansion, the log cabin called Fort Misery and the 1875 home of John Charles Fremont, who became Arizona’s colorful governor in 1878.

Strolling the meandering walkway from building to building felt like visiting a quaint 1860s village. From the Bashford House, we walked past the ornate gazebo to the Fremont House. Though sparse by today’s standards, the cottage back then stood clapboard and gingerbread above the rough log house across the path that functioned as the Governor’s Mansion at the time.

My favorite thing is to go where I’ve never been.