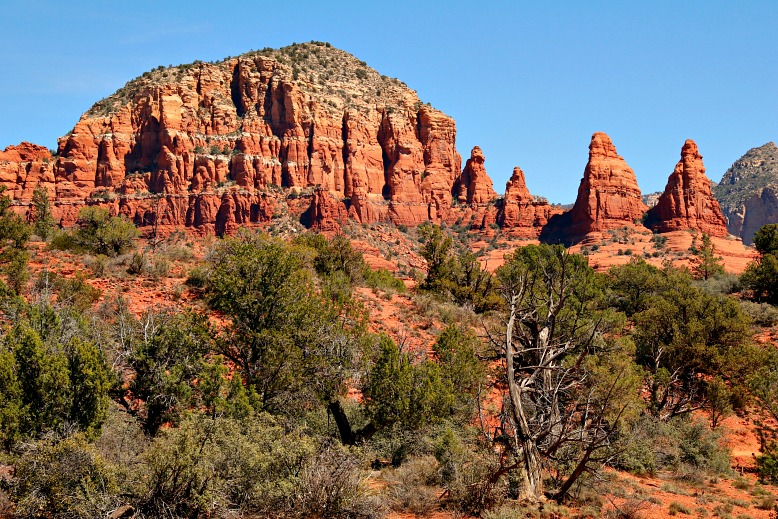 Flagstaff is just 27 miles north of Sedona on Arizona Route 89A (possibly one of the most visually stunning scenic drives in Arizona) and features a geographic view of Mt. Humphreys, a 12,633 foot extinct volcano that is surrounded by Ponderosa Pine trees that famously give off a vanilla aroma during the spring and summer seasons.

This gorgeous gash in the landscape has a spectacular feature: you can drive through it! Take a scenic detour off Interstate 17 by exiting onto AZ 89A toward Sedona. A wonderful road built in 1929 it runs the entire 13-mile length of the canyon. During the 2,500-foot elevation drop into Sedona the pine trees fade in your rearview mirror as brilliant orange-and-red sandstone bluffs and steep canyon walls appear on your right.

These formations not only surround Sedona but they appear to hover over it. (At certain points along Route 89A, the jagged mountain faces almost seem within reach.)

The forested canyon floor ranges from a mile wide at the top end to 2.5 miles at the mouth, and up to 2,000 feet deep from the creek to the tops of the highest sheer red cliffs.

In Sedona, AZ-89A splits to head west. Stay south on State Route 179 to revel in the area’s spectacular scenery. From Sedona, State Route 179 (Red Rock Scenic Byway) winds 7.5 miles south through the Coconino National Forest along some of the most gorgeous red-rock sandstone and geological formations in the country. There are several places to pull off the road and stare at the grand and vibrant otherworldly landscape.

In about 3 miles, look for Cathedral Rock (6246 SR-179), the Empire State Building of Sedona’s skyline. Back on State Route 179, continue south and in less than 1 mile turn east (left) onto Chapel Road and drive 1 mile to view the Chapel of the Holy Cross. Built in 1956, the pyramidal structure juts dramatically from the surrounding red rocks.

Tucked away on the banks of the gorgeous Oak Creek in Sedona, Tlaquepaque is a nod to Mexican architecture and artisan culture both in name and purpose. It’s a beautiful little arts and shopping village characterized by pretty cobblestone streets and vine-covered walls that lie under the shade of enormous sycamore trees making it an extraordinarily picturesque destination. With an unimaginably diverse range of arts and crafts, there’s something for everyone in this unique little enclave.

A nature preserve and environmental education center, Red Rock State Park offers more stunning scenery. Trails throughout the park wind through manzanita and juniper to reach the banks of Oak Creek. Green meadows are framed by native vegetation and hills of red rock. The creek meanders through the park creating a diverse riparian habitat abounding with plants and wildlife.

Stick with AZ-89A south through the town of Clarkdale where you can check out Tuzigoot National Monument an interesting pueblo ruin atop a hill just above the town. The pueblo was built by the Sinagua people, who thrived in this arid region for nearly 10 centuries. Tuzigoot, built in AD 1125, was a communal home occupied by a clan of peaceful Sinagua farmers for close to 300 years.

Beyond Clarkdale, AZ 89A climbs a series of switchbacks to Jerome. This mostly abandoned mining town is perched high on the side of Mingus Mountain. In the early 1900s as many as 15,000 people lived and worked in Jerome once known as the “Wickedest Town in the West.

It’s not the destination, it’s the journey.