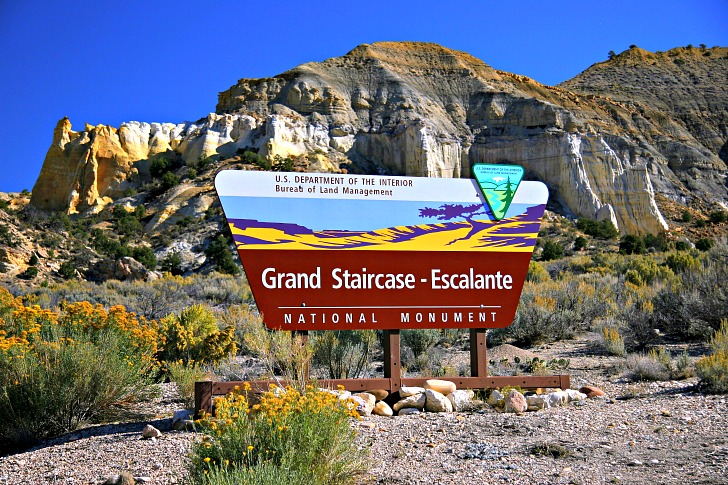 So called for the series of plateaus that descend from Bryce Canyon south toward the Grand Canyon, marked by vertical drops at the Pink Cliffs, Grey Cliffs, White Cliffs, Vermillion Cliffs, and Chocolate Cliffs. Lots of colorful scenery herein, natch! They ought to call it the Grand Stare-case.

The sense of wonder inspired by the magnificent beauty of Grand Staircase-Escalante National Monument excites the imagination and invites exploration of the natural world. Within this vast and untamed wilderness, visitors find places for recreation and solitude.

The Grand Staircase-Escalante National Monument dominates any map of southern Utah and spans 1.7 million acres of America’s public lands between the Utah-Arizona border to Bryce Canyon National Park on the west and Capitol Reef National Park on the east. It is unique in that it is the first monument to be administered by the Bureau of Land Management (BLM), rather than the National Park Service.

Entry into the national monument is by two paved roads: Highway 89 between Kanab and Big Water on its southern end and All American Road Scenic Byway 12 between Bryce Canyon and Boulder on the north. Johnson Canyon Road and Burr Trail are two other hardened-gravel access roads. All the other roads into the Monument are dirt, clay, or sand. Caution should be exercised when traveling on unpaved roads as conditions can change quickly and dramatically depending on the weather. High clearance four-wheel drive vehicles are recommended. Services, smart phone access, and water are generally not available.

The monument is a geologic sampler, with a huge variety of formations, features, and world-class paleontological sites. A geological formation spanning eons of time, the Grand Staircase-Escalante National Monument is a territory of multicolored cliffs, plateaus, mesas, buttes, pinnacles, and canyons. It is divided into three distinct sections: the Grand Staircase, the Kaiparowits Plateau, and the Canyons of the Escalante.

Despite their different topographies, these three sections share certain qualities: great distances, enormously difficult terrain, and a remoteness rarely equaled in the lower forty-eight states. Human activities are limited on these lands, yet their very remoteness and isolation attract seekers of adventure or solitude and those who hope to understand the natural world through the Monument’s wealth of scientific information.

The Grand Staircase rises in broad, tilted terraces. From the south the terraces step up in great technicolor cliffs: vermilion, white, gray, pink. Together these escarpments expose 200 million years of the earth’s history.

The highest part of the Monument is the Kaiparowits Plateau. From the air, the Plateau appears to fan out southward from the town of Escalante into an enormous grayish green triangle, ending far to the south at Lake Powell and the Paria Plateau. The 42-mile-long Straight Cliffs mark the eastern edge of the plateau, ending at Fiftymile Mountain in the southeast.

To the north of Fiftymile Bench is the Aquarius Plateau, dominated by the 11,000-foot Boulder Mountain. To the east lies an expanse of pale Navajo sandstone which the Escalante River and its tributaries, flowing down from the plateau, have carved into a maze of canyons. In this arid territory, it is ironically water that has done the most to shape the landscape.

As intriguing as it is beautiful, Grand Staircase-Escalante National Monument also provides remarkable possibilities for scientific research and study. Researchers continue to uncover new insight about how the land was formed and the life it sustains.

What scientists are learning and the methods they use to understand what it all means can be discovered at Grand Staircase-Escalante National Monument visitors centers located in the communities of Kanab, Big Water, Cannonville, and Escalante. With so much information to share, each visitor center’s interpretive exhibits focus on different scientific themes, including paleontology (Big Water), geology and archaeology (Kanab), the human landscape (Cannonville), biology, botany, and eology (Escalante).

Through interpretive exhibit, visitors learn about the spectacular Monument resources and gain a greater appreciation for the natural world.