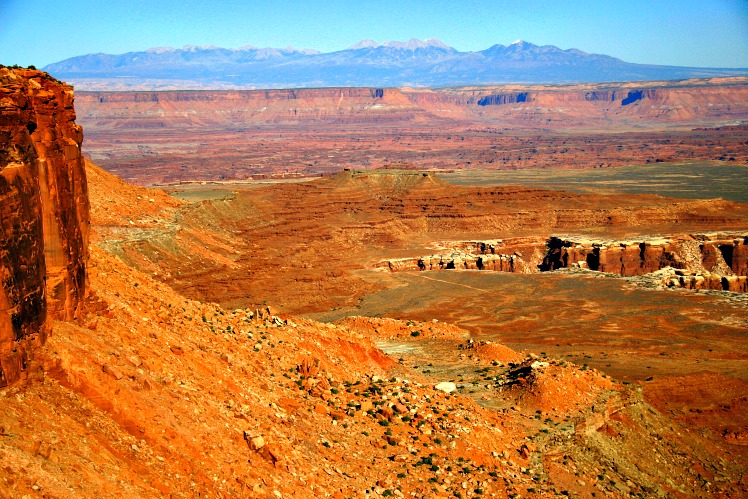 A tourism destination by itself or a perfect addition to Arches and Canyonlands itineraries, Four Corners is a journey into sweeping landscapes with human and geologic history. Culturally, the region is a combination of Mexican, Mormon, Navajo, Hopi, Ute, and Zuni ancestry. It is a part of the Colorado Plateau, a geological formation responsible for much of the snow and rainfall over the central U. S.

The iconic landscape of Monument Valley symbolizes the American West with its towering buttes and sweeping skies. Located on the Utah-Arizona border, a 17-mile loop drive takes visitors through the park with guided tours also available which allow access to more remote areas of the park. The 3.2-mile Wildcat Trail is open for unguided hiking. A $20 cash-only fee is charged to enter the park, and the on-site The View Campground has views living up to its name.

Stretching from the beginning of the Grand Canyon at Lees Ferry in Arizona to the Orange Cliffs of southern Utah, Glen Canyon National Recreation Area is graced with scenic views, unique geology, and evidence of 10,000 years of human history. Within the recreation area, Lake Powell is the second largest man-made lake in the U. S. and is widely recognized as a premier boating destination.

Natural Bridges is home to three expansive rock arches and the first International Dark Sky Park. Though less accessible than Utah’s national parks, it is just as grand. At 6,500-feet in elevation atop the massive Cedar Mesa the park is a little cooler in the heat of summer than other parks. Abundant hiking, stargazing, and canyoneering make this a quiet haven for those looking to explore a little off the beaten path.

Canyon de Chelly offers a spectacular collection of sheer red sandstone cliffs forming a maze of canyons that all lead into the main Canyon de Chelly. Although none of the cliffs exceeds 1,000 feet the huge 800-foot monolith Spider Rock is an awesome sight. Part of the Navajo Reservation, Canyon de Chelly is also home to thousands of Ancestral Pueblo ruins and archaeological sites dating as far back as 2500 BC.

Once home to over 2,500 people, Hovenweep includes six prehistoric villages built between A.D. 1200 and 1300. Explore a variety of structures, including multistory towers perched on canyon rims and balanced on boulders. The construction and attention to detail will leave you marveling at the skill and motivation of the builders.

Mesa Verde National Park (Spanish for green table) was established to preserve archaeological sites built by the Ancestral Puebloans who inhabited Mesa Verde for more than 700 years (550 A.D. to 1300 A.D.). Currently Mesa Verde has over 4,700 archaeological sites including 600 cliff dwellings and the mesa top sites of pithouses, pueblos, masonry towers, and farming structures. These sites are some of the most notable and best-preserved dwellings in the U. S.

Navajo Bridge was the only vehicle structure spanning the Grand Canyon until it was replaced in 1995 by a new bridge immediately next to it. The old bridge was kept as a pedestrian bridge, and today visitors can walk across and take in the beginning of the Grand Canyon at Marble Canyon and the Colorado River 467 feet below. Often seen are Grand Canyon rafters and endangered California condors with nine-foot-wide wing spans.

Canyonlands National Park, formed by the currents and tributaries of Utah’s Green and Colorado rivers is home to many different types of travel experiences from solitude in the more remote stretches of the park to moderate hikes through Islands in the Sky and the Needles district.

Our happiest moments as tourists always seem to come when we stumble upon one thing while in pursuit of something else.