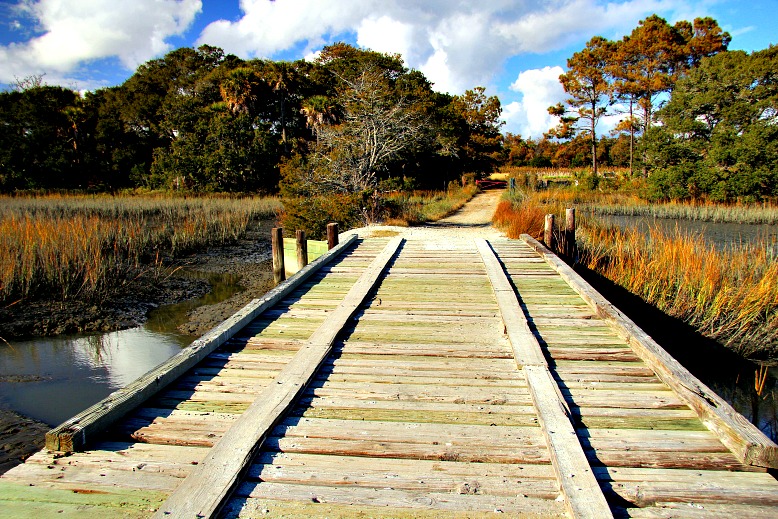 If you want to see the South Carolina coast the way the original settlers did, take a step back in time to Botany Bay Plantation Heritage Preserve located adjacent to the waters of the Atlantic Ocean in the northeast corner of Edisto Island. The 3,363-acre preserve includes almost three miles of undeveloped, breathtaking beachfront that you’ll never forget. The area lies near the North Edisto River just south of the intensely developed resort islands of Kiawah and Seabrook and just north of the rapidly developing Edisto Beach area.

The area’s location near the North Edisto River places it within the boundary of the ACE Basin Focus Area, one of the largest remaining relatively undeveloped wetland ecosystems along the Atlantic Coast.

The features of this wildlife management area are characteristic of sea islands along the lower southeast coast: pine hardwood forests, agricultural fields, coastal wetlands, and a barrier island with a beachfront. Only this tract has been left undisturbed, providing coastal habitat for a wide range of wildlife species, including loggerhead sea turtles, the state-threatened least tern, and neo-tropical songbirds like the painted bunting and summer tanager.

Botany Bay is very accessible; you can tour most of the property in half a day or less. Simply pick up a free self-guided driving tour guide at the information kiosk and you’re on your way. The 6.5-mile route begins along a magnificent avenue of oaks interspersed with loblolly pine and cabbage palmetto, the state tree. Look for colonies of resurrection fern growing on the spreading oak limbs. After a rain, the leaves of the resurrection ferns turn a beautiful bright green.

When you get to the four-way stop, turn right into the beach access parking lot. There you’ll find the trailhead to the half-mile Pockoy Island Trail where a causeway built by slaves takes you over the marsh and through a densely wooded hammock. Then cross a small barrier island to arrive at the preserve’s 2.8 miles of seashore.

Erosion on Botany Bay Beach has left a “boneyard” of dead trees along the sand creating a unique coastline you’ve got to walk to fully appreciate. Shell collection is prohibited; as a result the beach is full of whelks, scallops, clams, mussels, oysters, sea stars, and sand dollars. The best time to visit the beach is at low tide when a wider section of the shoreline is exposed.

Continue the driving tour by staying on the beach access road until you get to another parking area just past the four-way stop. It’s a short walk from here to two small buildings built in the 1800s. The white wooden Gothic Revival structure once served as the icehouse (pictured above) for Bleak Hall. In the old days, ice shipped from the north was packed in sawdust and stored in the tabby wall foundation.

The other building is a tabby gardener’s shed (pictured above) erected next to the now overgrown Japanese formal garden, the first of its kind in North America. The camphor, olive, and spice trees are long gone but ivy, several types of privet, and a few other exotic plants still thrive along the edges of the old garden.

Farther along is another tabby structure. During the Colonial period, it was used as a barn and later it was used as equipment shed. The road then takes a couple of sharp 90-degree turns, winding along the salt marsh and offering spectacular views of Ocella Creek. This section also features lots of century-old live oaks draped in Spanish moss.

From there, you’ll pass the chimney of a slave house and a couple of ponds created in the 1970s as a habitat for wood ducks, wading birds, and many aquatic species. Cross the dike and you’ll enter the former Sea Cloud Plantation.

The final section of the driving tour features the remains of the Sea Cloud Plantation house and a brick beehive built by slaves in the 1700s as a source of drinking water.

Botany Bay is free and open to the public except on Tuesdays and during scheduled hunts. Due to changing advisories, please check local travel guidelines before visiting.

Two roads diverged in a wood, and

I took the one less traveled by,

And that has made all the difference.

— Robert Frost, The Road Not Taken