Like standing on the crest of a breaking wave, Cedar Breaks National Monument rests at the end of the Markagunt Plateau, its amphitheater stretching below with multicolored cliffs, spires, and pinnacles 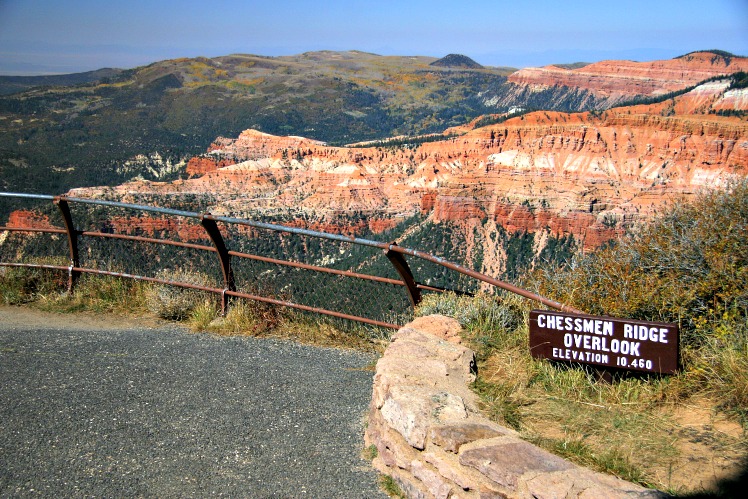 “The Mighty Five”—Zion, Bryce Canyon, Capitol Reef, Canyonlands, and Arches—are the five spectacular national parks found in Utah. All are on the Colorado Plateau, a premier location to see, marvel, and enjoy the creations of earth’s geological history.

The National Park Service oversees a total of 32 parks, national monuments, recreational areas, and historic sites that are located on the Colorado Plateau, many rivaling the geological beauty of Utah’s Mighty Five. Cedar Breaks National Monument is one such geological paradise of the Colorado Plateau and well worth a summertime visit.

Cedar Breaks is a 6,155 acre preserve of high desert landscapes. The park ranges in elevation from 10,662 feet in the northern region to 8,100 feet near Ashdown Creek on the western boundary. Cedar Breaks is the crown jewel of the Markagunt Plateau and marks the top of the “Grand Staircase” of the Colorado Plateau.

Even for this modern world, Cedar Breaks National Monument is located in a remote area. There are no park dining or lodging accommodations. The closest town is Brian Head, best known for its winter ski resorts and cool summer rentals.

Due to the high elevation, Cedar Breaks National Monuments and the roads that connect it to the outside world are usually closed from mid-November to late May. During the summer months the monument offers a 28-site campground with grills, restrooms, showers, and fresh water. An overnight stay at the monument allows visitors to experience the region’s world famous dark skies. Warm clothing and sunscreen are a must even during the days of summer.

The land encompassing Cedar Breaks was described in 1868 by early Mormon settlers as “a paradise on the mountain”. A colorful palette of weathered pinnacles and cliffs, Cedar Breaks National Monument is home to some of the most dramatic desert erosion features on this planet. The multi-colored geological amphitheater found at Cedar Breaks is 2,500 feet deep and 3 miles wide with the highest point of the amphitheater’s rim standing at 11,000 feet.

Weathering and erosion sculptured the multicolored cliffs, spires, pinnacles, and other unique features at Cedar Breaks. Without such processes, Cedar Breaks would be just another of the many alpine plateaus so common in the American West. The landscape has been under construction for nearly 100 million years and those slow moving forces of nature continue to shape and reshape the landscape today.

Archeologists believe that the Southern Paiute people have lived in the Cedar Breaks region since at least 1100 BC. They called the giant amphitheater “u-map-wich” which when translated to English means “place where the rocks are sliding down.”

Earliest American settlers called the area “the badlands” or “breaks” in reference to common cliff like edges that they came upon while traveling across the relatively flat plateaus. Utah juniper trees were the common vegetation of the area and early settlers incorrectly called these trees “cedars” thus soon giving rise to the name Cedar Breaks.

An incredible dark sky is one of the attractions for visitors to Cedar Breaks. In January 2018 the monument was designated a Dark Sky Park by the International Dark Sky Association. Cedar Breaks is the 16th of the 417 National Park Service units to be so designated. In fact, the State of Utah now has seven designated IDA Dark Sky Parks.

Wildflowers bloom in profusion during the summer months with the national monument holding an annual Cedar Breaks Wildflower Festival each July. Utah juniper, Douglas fir, Engelmann spruce, and Limber pine make up a diverse and dense forested region. At the highest of elevations, the ancient Bristlecone pine is found. The oldest Bristlecone pine found in Cedar Breaks is believed to be about 1,700 years old.

The first tourists to arrive by car to Cedar Breaks occurred in 1919. Between 1920 and 1923 a rustic road was carved from Zion National Park to Cedar Breaks allowing more tourists to discover the splendid landscape. A late 1930s road advertisement proclaimed that Cedar Breaks National Monument had “countless grotesque and magnificent geological forms, caused by water erosion, anointed with all colors of the rainbow.” That description still stands today.

Near “The Mighty Five” national parks of Utah and just a few hundred miles north of Arizona’s Grand Canyon, Cedar Breaks is all too often passed by. But for those wanting to view nature at its finest, geology’s creative beauty, and dark skies seldom seen today, a trip to Cedar Breaks National Monument is certainly a journey worth traveling.

Look! Nature is overflowing with the grandeur of God!