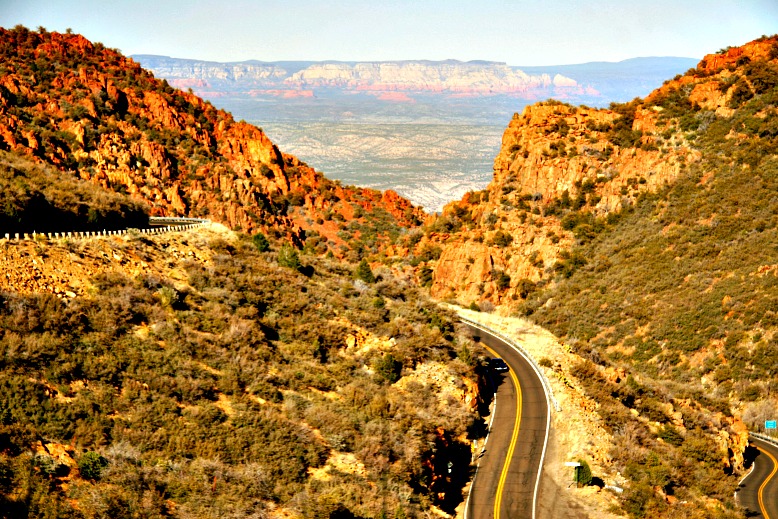 Everyone has a favorite road, often some less-traveled stretch of curvy blacktop through an area of scenic countryside. What I consider to be one of the grandest drives in Arizona fits that bill and beats the heat is a federally recognized scenic byway that climbs tall mountains, traverses sweeping grasslands, encounters the grandest of vistas, and passes through historic towns along the way.

Remember to travel with caution, follow good health practices, and behave responsibly when outdoors or around other people. Also, get the latest information about your destination before proceeding. Check for fire restrictions and other closures.

Leaving Prescott, drive north on Highway 89 until you hit the intersection with 89A in the direction of Jerome. This piece of roadway was constructed in the 1920s as something of a shortcut over the crest of Mingus Mountain between Prescott and Jerome which was then a thriving copper-mining town. Again, it can be challenging, but in a good way.

Peaking at 7,000 feet, the 34-mile trek at higher elevations passes through tall-pine forest. The road twists through canyons and over crests with impressive climbs, dazzling drop-offs, and views that make you want to stop the car to get out and stare. There actually are quite a few pullouts for parking and enjoying the ambience with several of them in the narrow and absolutely stunning valley that you encounter while approaching Jerome. Look far ahead for a sighting of the red rocks of Sedona in the distance.  You’ll want to stop to bask in the glory of the view.

The descent proves just as steep and curving as the climb up the mountain. But since you’re not hemmed in by a canyon the views are more dramatic. Take advantage of the pullouts to stop and marvel at the details. You’ll see evidence of mining activity as you get lower. Pass through a rocky cleft then wind around a few more curves and you’ll be pulling into Jerome. Now you can relax.

The entrance to Jerome happens suddenly; one moment you’re on this mountain road and the next you are on a narrow stretch of village streets. Small homes perch above you on the left and below you on the right with ancient concrete walls and curbs lining the road. Go slowly through here as there are homes and businesses packed close to the street and usually bands of tourists wandering around aimlessly.

One final curve to the right and you’re in downtown Jerome with its reclaimed century-old buildings, shops, art galleries, cafes, and bars including the Spirit Room, a longtime favorite for locals, out-of-town visitors, and bikers of the Harley-Davidson variety.

Jerome has a boom-to-bust ghost-town history that builds on its charm. From the 1890s through the 1920s, Jerome was a copper-mining boom town fading through the Depression of the 1930s, coming back as copper demand grew during the war years, and then shriveling up in the 1950s from a peak population of about 4,400 to a low of fewer than 100.

To make things worse, soil subsidence on the town’s precarious incline on the side of Cleopatra Hill caused by deforestation, fires, and mine blasting made major buildings collapse and some homes slide down the hill.

Yet Jerome’s rugged historic beauty cast its spell on artists and offbeat souls who repopulated the town restoring its homes and its downtown as well a regular destination for a steady flow of tourists and shoppers.

As you leave Jerome, be aware that the town of Cottonwood in the broad valley below the mountain range is a nice place to stop. There’s also an incredible prehistoric pueblo ruin called Tuzigoot National Monument just to the east.

If you are still enticed, continue on 89A into Sedona with its towering red rock formations and popular downtown then through lush Oak Creek Canyon up an amazing set of switchbacks to the surface of Mogollon Rim above and on to Flagstaff which sits at 7,000 feet elevation.

None of this lengthy trip on Arizona 89A will be in the least bit tedious, especially newbies who will be enthralled by the continuous and ever-changing array of remarkable scenery. I’ve been on this route many times and never tire of it.