Wall Drug is NOT your typical drug store 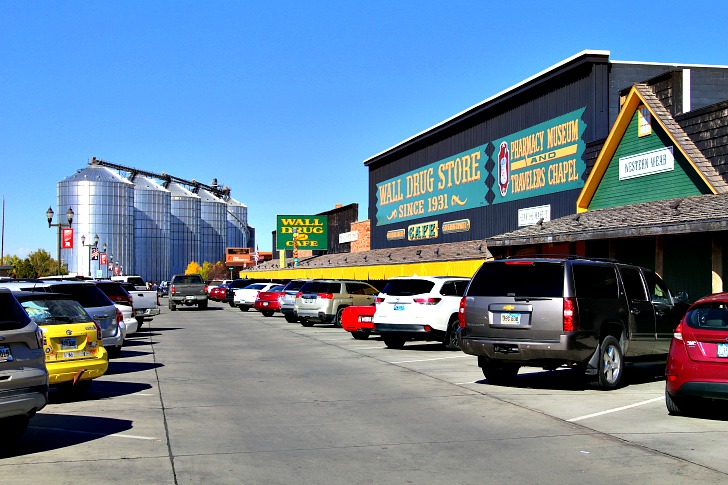 Ever see one of those weird signs along the side of the road that read “Wall Drug, 3,472 miles,” and been like “I saw a Walgreens like three exits ago!” But, Wall Drug is NOT your typical drug store but rather a landmark shopping extravaganza off I-90 an hour east of Mount Rushmore and the Black Hills.

In addition to four city blocks of every local souvenir imaginable, it has a restaurant with buffalo burgers and fresh doughnuts, life-sized dinosaur replicas, a jackalope that you can ride—and FREE ICE WATER!

One of the world’s most well-known tourist stops, it’s hard to believe Wall Drug Store got its start with something we wouldn’t even turn our heads at today—the promise of free ice water. But in fact, Ted and Dorothy Hustead turned free ice water into a million dollar idea with a little determination and quick thinking.

How do you make a living in a town of 230 people that is unanimously described as being “in the middle of nowhere” by residents and tourists alike during the middle of the Great Depression? You work with what you have—even if it’s not much. This is the story of how a tiny little drug store became the world famous Wall Drug.

The history of Wall Drug as we know it began back in 1931, when Nebraskan Ted Hustead bought it. He was looking to move to a small town with a Catholic Church and open a pharmacy, and Wall, South Dakota met his requirements.

Business was pretty slow at first—total shocker, right? It was Dorothy who finally dreamed up a brilliant plan to bring in more customers to their establishment: put up billboards offering free cups of refreshing ice water to tourists passing near Wall on their way to Mount Rushmore, about 60 miles west.

The year was 1936. The Great Depression gripped the nation, and the Dust Bowl made things doubly bad on the high plains. It’s doubtful many businesses had worse prospects than Hustead’s small establishment in that small town in the far reaches of western South Dakota.

So remote and drought-stricken was Wall that, when Ted bought the town’s drug store, his father-in-law told him, “You know, Wall is just about as Godforsaken as you can get.”

Ted put the signs up along Route 16A (Interstate 90 would eventually come through Wall, but not until 1969), and the tourists came. They stopped for the free ice water. They bought ice cream. And since then, they’ve bought millions of touristy trinkets and spent countless hours partaking of the free, fun and shopping that is the modern Wall Drug.

Wall Drug is a rest stop from the era when you really would stop to rest, rather than pull off the interstate, gas up, and go. It’s a rest stop worth taking because once the roads get this long—and the roads here do get long—you really do need more than a few minutes to decompress before facing the next stretch of asphalt.

But, Wall Drug more than a tourist trap—it’s an icon. It brings in 2 million visitors each year to a town that people would ordinarily drive right past without a second thought. But the fact that, even though it has grown into a massive complex of kitsch and touristy cliches, they’ll still serve you a free cup of ice water when you pull up, really does say it all.

Free Ice Water. It brought us Husteads a long way and it taught me my greatest lesson, and that’s that there’s absolutely no place on God’s earth that’s Godforsaken. No matter where you live, you can succeed, because wherever you are, you can reach out to other people with something that they need!