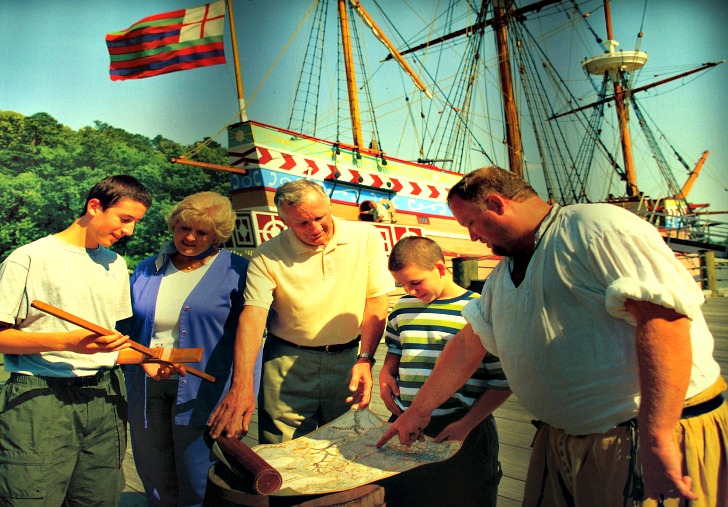 Traveling through America the past is often hidden, masked by strip malls and suburban sprawl. However, restoration and reconstruction projects are occurring in cities and towns across the nation to preserve our past for future generations.

The Historic Triangle is formed by Historic Jamestowne, Colonial Williamsburg, and Yorktown Battlefield, three cities that were instrumental in America’s development, freedom, and democracy.

On May 14, 1607, the ships sent by the Virginia Company of London, the Susan Constant, Godspeed, and Discovery, landed at Jamestown Island with 104 passengers—all men and boys. They began building America’s first permanent English settlement, predating Plymouth in Massachusetts by 13 years.

Decimated by disease, famine, and Indian attacks, less than half of them survived the first year. However, with more settlers arriving every year and the establishment of their first cash crop, the tiny settlement began to flourish.

Through living history, a film, and gallery exhibits, the aspirations of these pioneers and the hardships they faced are depicted at Jamestown Settlement. Located about a mile from the original site, Jamestown Settlement is 10 minutes from Williamsburg, Jamestown’s successor as capital of the Virginia colony.

Your visit to Jamestown Settlement begins with an introductory film that presents an overview of Jamestown’s origins in England and the early years of the colony. Exhibition galleries chronicle the nation’s pre-17th-century beginnings in Virginia in the context of its Powhatan Indian, English, and western central African cultures.

Triangular Fort James is a recreation of the one constructed by the Jamestown colonist on their arrival in 1607. Inside the wooden stockade are wattle-and-daub structures and thatched roofs representing Jamestown’s earliest buildings including dwellings, a church, a storehouse, and an armory.

More settlements followed and it was in Williamsburg that the seeds of revolution were sown by the intellectual and independent thinkers who flocked to the city.

Become a resident of a city on the verge of war—or in the midst of it—as you explore the government buildings, shops, homes, gardens, and taverns of Williamsburg. Encounter townspeople on their own soil as they live through a time of change and uncertainty. Buzzing with political discussion and dispute, the city comes alive. Enter the residents’ homes or learn about their workplaces; see where they sleep, where they eat, and where they socialize.

Many of the buildings, like the Courthouse, Magazine, and Wetherburn’s Tavern, have stood in Williamsburg since the 18th century. Others, like the Capitol and Governor’s Palace, have been reconstructed on their original foundations. Some of the buildings are used as private residences and offices. Flags out front indicate areas open to guests.

The port city of Yorktown forms the third point of the Historic Triangle, famous for its decisive battle and end to the Revolutionary War.

As you stroll through historic Yorktown, let the past envelop you as you immerse yourself in 300 years of history. Here you can experience many 18th century homes, visit the location where the surrender terms for the Battle of Yorktown were negotiated or the home of the Virginia militia with its walls still bearing the scars of cannonballs fired upon the village in 1781. Explore the battlefields, fortifications, and historic buildings where American independence was won.

Americans won their independence here during the last major battle of the American Revolutionary War on October 19, 1781, when British troops surrendered to General George Washington and his French allies.

Today, Yorktown Battlefield is joined by the scenic Colonial Parkway to Colonial Williamsburg and Historic Jamestown and is located just 12 miles east of Williamsburg.

On the whole, I find nothing anywhere else…which Virginia need envy.