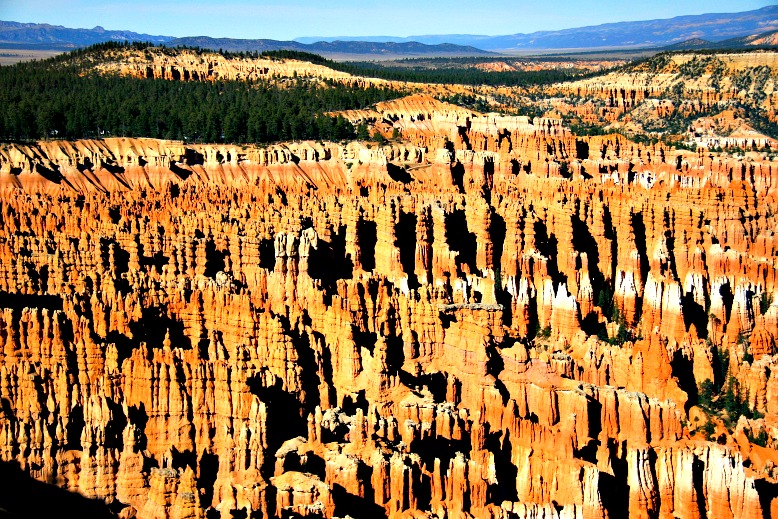 Like many of America’s national parks, Utah’s Bryce Canyon National Park has many cool pockets to explore. Nothing compares, though, to the feeling you get when standing before the hoodoos that make up the Bryce Amphitheater. It’s essentially a gigantic bowl-shaped valley filled with weird, orange rock spires. These hoodoos are formed by wind and the expanding ice that cracks and weathers the entire canyon resulting in this mysterious and distinctive rock formation.

For this article, I want to highlight a few different ideas that will deliver a diverse experience in Bryce—where to drive, hike, stay, and wander—with the caveat that at this one-of-a-kind national park there is nothing more spectacular than the red rock nation that sprawls across Utah’s high desert on the Colorado Plateau.

Hitting the scenic auto-trails in the national parks is often the best place to gain an understanding of the lay of the land. Many of the park roads were developed and built by the Civilian Conservation Corps (CCC) in the early days of the park service in an effort to provide access to the most interesting and marketable features nearby. A scenic tour along the 38-mile (round trip) Bryce Canyon National Park Rim Road provides access to 13 viewpoints that peer over the amphitheaters. It is a perfect first outing to get acquainted with the park.

Standing inside the amphitheater—even to walk just a short distance into the hoodoos—allows you to become a part of the landscape. The Navajo Loop trail is the park’s most popular hiking trail because of its accessibility and its beauty. Descending first into the Wall Street section, you are thrust upon an iconic scene in the park, a 700-year-old Douglas fir tree that rises in the midst of a slot canyon to search for sunlight in the sky. Traveling farther, you will find a vast network of trails leading into the hoodoos where you can chart your own course.

There are three options located inside the park: the North Campground (open year-round), Sunset Campground (high season), and the recently renovated 114-room Bryce Canyon Lodge which was built from local timber and stone in 1924-25. Any non-park related activity—sleeping, eating, shopping, fueling up, or learning about the local history—will almost surely bring you to Ruby’s legendary roadhouse.

The lodge was built in 1919 by Reuben C. (Ruby) Syrett who was so spellbound by the scene at Bryce that he decided to start up a “tourist rest” where he and his family could host visitors to the area. As the park became more popular, so did Ruby’s—it is an absolute can’t miss in the area (you couldn’t miss it even if you tried!)

Everything you need to fuel a park adventure is available there. The operation is still family run—by Ruby’s son Carl and two generations that follow him.

A 1-mile walk between Sunset Point and Sunrise Point offers panoramic views of the amphitheater and is suitable for the entire family. Each overlook is situated at a trailhead where you can descend into the hoodoos if you want to explore deeper.

Before you go, check Bryce Canyon’s official website for park alerts. As always, be safe, have fun, and enjoy!

Main attraction: Largest concentration of hoodoo formations in the world

Highest peak: Yovimpa and Rainbow Point at 9,105 feet (at the end of the 18-mile scenic park drive)

It’s a hell of a place to lose a cow.