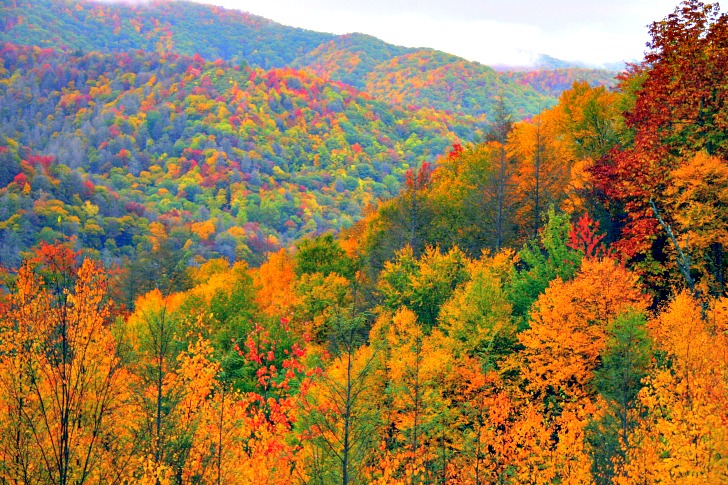 Great Smoky Mountains National Park is located in a crossroads of sorts through the American southeast. Winding through the heart of it is one of America’s most famed and prized scenic byways, the Blue Ridge Parkway.

Rivers in the area draw rafters and kayakers from all over the country to learn, practice, and play in the whitewater. Long distance trekkers cross through 71 miles of mountains in the Great Smokies while journeying the epic Appalachian Trail. The Cherokee Indian reservation on the southeast side of the park tells the story of the area’s Indian heritage. For art, food, and other city-centric activities, Asheville, North Carolina, is just down the road. There are even caves that worm into the karst formations underlying the Smokies’ extreme western portions.

Spend time roaming from the park’s 870-feet-above-sea-level basement to its 6,643-foot-high Clingmans Dome and you will, in essence, have negotiated diverse vegetative topography akin to what you would find hiking the Appalachian Trail’s 2,181 miles from Georgia to Maine. And above all, this park is very beautiful. It is for all of those good reasons and many others that visitors flock to the Great Smoky Mountains.

The Great Smoky Mountains got its name from the Cherokee Indians who called the area shaconage (shah-con-ah-jey) meaning “land of the blue smoke,” after the thick, bluish haze that hangs over the mountains peaks and valleys.

This Appalachian wonder that straddles the North Carolina-Tennessee state line holds many stories. There are stories in the log cabins, plank churches, and architectural wonders that farmers built for their crops and livestock in Cades Cove and Cataloochee, stories of ridge runners and moonshiners in the mountains, Native American stories, and stories of nature.

Cades Cove is a valley surrounded by a one lane, 11-mile loop road that puts visitors among wildlife, historic buildings, and trails from where you can head off on foot to explore deeper. The driving road is closed Saturday morning until 10 am during the spring and summer, allowing access to cyclists and people to wander without traffic. Visiting during the week in the off-season, we had the road mostly to ourselves!

Venture into this park draped over the ridgeline of the Appalachian Range and you’ll discover five different forest types; both grassy balds and heath balds near the mountains’ summits and an undergrowth that abounds with rhododendrons, magnolia, ferns, holly, and mountain laurel.

The Smokies were settled in the 18th century, logged into the 20th century, and have been flourishing almost as wilderness again since 1934 when this landscape was destined to become a national park. Despite the roughly 9 million visitors who traipse through the park each year, it continues to be a wellspring of biological diversity.

You could immerse yourself in Native American and early settler history in Cherokee, North Carolina. Stop in at the Oconaluftee Visitor Center and visit the park’s excellent Mountain Farm Museum often the site of hands-on Junior Ranger programs and demonstrations and then walk the 1.5 mile Oconaluftee River Trail to view the wayside exhibits detailing local Cherokee and Native American history.

The highest peak in any National Park often becomes iconic and Clingmans Dome in the Great Smoky is no different. From 6,643 feet, one can see 360-degree views of the National Park and far beyond on a clear day. Or avoid the crowds with a hike to the fire towers atop Mt. Cammer or Mt. Sterling. Both are steep hikes (the 2 miles up to Mt. Sterling are rumored to be the steepest in the park) but the views from the crest of the Smoky Mountains are unparalleled.

It’s easy to lose an entire day or days exploring by car because there is so much to see just by looking out the window. It is when you head out on foot, though, that you really get a sense of the incredible vastness in the Great Smoky Mountains. It’s an odd feeling being a simple human among millions and billions and trillions of trees. Odd and especially awesome when the blue haze that rests upon the tops of those trees is met by a distinct peacefulness that occurs there during the quiet of off-season.

Bird alert! More than 240 species of birds have been found in the park. Sixty species are year-round residents. Nearly 120 species breed in the park, including 52 species from the neo-tropics. Many other species use the park as an important stopover and foraging area during their semiannual migration.

Every year, synchronous fireflies light up the Smokies for about two weeks during their annual spring mating ritual. They are the only beetles in North America with the ability to flash in sync.

If you drive to, say, Shenandoah National Park, or the Great Smoky Mountains, you’ll get some appreciation for the scale and beauty of the outdoors. When you walk into it, then you see it in a completely different way. You discover it in a much slower, more majestic sort of way.