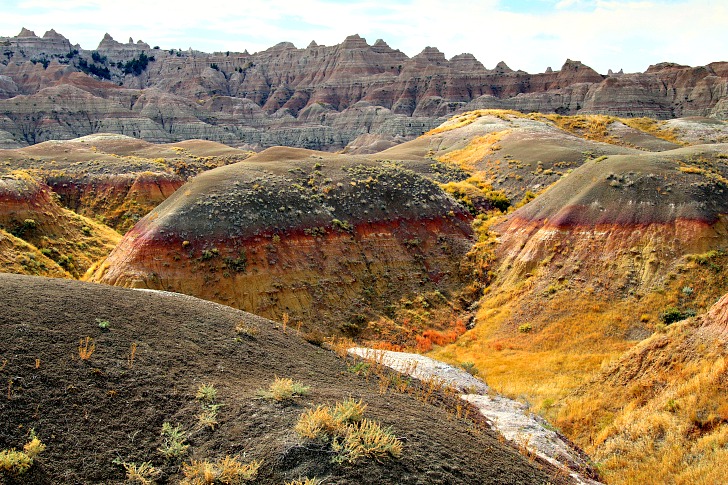 Interest in national parks is booming, with crowd-wary Americans drawn to wide open spaces and natural beauty. But the preserves are also a great place for learning, fantastic laboratories for getting up close to the natural world. Here are some of my favorite sites.

Steady rain and a long growing season have created a dense forest in the southern Appalachian Mountains. Variations in elevation, rainfall, temperature, and geology in these ancient mountains provide ideal habitat for over 1,600 species of flowering plants including 100 native tree species and over 100 native shrub species.

The geological formation responsible for many California earthquakes passes by the south side of this desert park and connects with many of the region’s faults. Visitors can see evidence in small fan palm oases which formed when seismic activity dammed groundwater and forced it to the surface. When you see water, it’s the result of massive underground activity.

The Grand Staircase is an immense sequence of sedimentary rock layers that stretch south from Bryce Canyon National Park through Zion National Park and into the Grand Canyon. In the 1870s, geologist Clarence Dutton first conceptualized this region as a huge stairway ascending out of the bottom of the Grand Canyon northward with the cliff edge of each layer forming giant steps. What makes the Grand Staircase worldly unique is that it preserves more Earth history than any other place on our planet.

Be Transported into a Painting: Petrified Forest National Park, Arizona

While many national parks around the country are home to vast forests this preserve comes with a twist—the trees here have all been dead for hundreds of millions of years transformed into colorful slabs of stone. A broad region of rocky badlands encompassing more than 93,500 acres, the Painted Desert is a vast landscape that features rocks in every hue—from deep lavenders and rich grays to reds, oranges, and pinks.

Not only is the geology and scenery dramatic at this park, but so is its fossil history. The area includes the remains of an ancient river system. This is one of the richest fossil assemblies on the face of the planet. You can walk down almost any trail and if you can see little bits of fossils everywhere, lots of fragments and teeth.

Carlsbad is famous for its nightly bat emergence, but the mammals aren’t the only ones who call the grotto home. Cave swallows living just inside the cavern can be seen swooping around during the day, but must get home before the bats crowd the cavern on their way out. You can easily see them in the warmer months. And 750 feet underground, the stalactites hang from the ceiling and the stalagmites rise up from the ground.

Stretching more than a hundred miles along the Blue Ridge Mountains of western Virginia, Shenandoah National Park offers a patchwork quilt of wilderness and pastoral landscapes. Skyline Drive rides along the crest of the Blue Ridge Mountains and through the heart of the park. Along the 105-mile stretch which climbs to 3,680 feet above sea level, you’ll have the opportunity to pull off the road at 75 scenic overlooks and take part in an array of recreational activities—from hiking, horseback riding, and rock climbing.

The active but sleeping volcano is the high point of a lively wilderness environment. Across 160,000 acres, elevations range from 5,300 to over 10,000 feet creating a diverse landscape decorated by jagged mountain peaks, alpine lakes, forests, meadows, streams, waterfalls, and of course, volcanoes. There are hot springs, geysers, fumaroles, mud pots, steam vents, and other geothermal features in the area as well from where bubbling activity still appears, reminding us of the region’s stormy past.