Step into the past and experience the lives of one of America’s oldest cultures, the Pueblo people 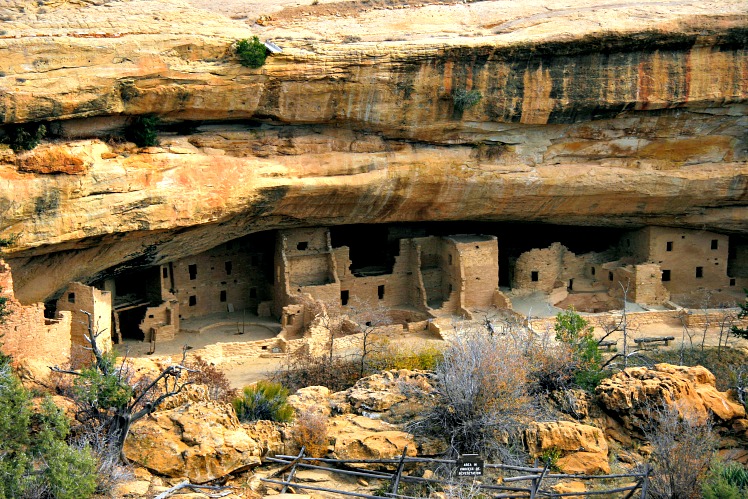 Most of the national parks in the Southwest are about the landscapes, but Mesa Verde in southern Colorado is more cultural than natural. There’s still plenty of rugged scenery, but there are also more than 5,000 archaeological sites contained within Mesa Verde’s boundaries.

Mesa Verde, Spanish for “green table”, offers a spectacular look into the lives of the Ancestral Pueblo people who made it their home for over 700 years, from AD 600 to 1300. Today the park protects these sites, some of the most notable and best preserved in the U.S.

These master builders constructed elaborate complexes tucked into sandstone cliffs. Some held just a few people, while others, such as the Cliff Palace and Long House, have 150 rooms and could have housed up to 100 people.

Unique in the park system, Mesa Verde is the first and only park created for the protection and preservation of archaeological resources and is the only UNESCO World Heritage Site in Colorado. Conde Nast Traveler chose it as the top historic monument in the world, and National Geographic Traveler chose it as one of the “50 places of a Lifetime— the World’s 50 Greatest Destinations”, in a class with the Taj Mahal and Great Wall of China.

Mesa Verde does not lend itself to a hurry-up visit. It takes time to savor the magic of its eight centuries of prehistoric Indian culture. As a vintage slogan at the park advises: “It’s a place where you can see for 100 miles and look back in time 1,000 years.”

The intricate architecture is as awesome to behold today as it was when cowboys and ranchers first saw it. Two men looking for lost cattle, Richard Wetherill and Charles Mason, came upon the most spectacular site, the 150-room Cliff Palace, in 1888. Mesa Verde National Park was established 18 years later, in 1906.

The best way of acquiring a feeling for Mesa Verde is to follow the 6-mile Mesa Top Auto Loop Road which traces Pueblo history at 10 overlooks and archeological sites.

But for an intimate look at the kivas and actual living accommodations take the short hike from the Chapin Mesa Archaeological Museum to Spruce Tree House, the only major Mesa Verde site available for self-guided tours. The paved trail leads to the 114-room, eight-kiva structure—the one initially discovered by Wetherill. One popular feature is a reconstructed and roofed kiva visitors can access by ladder.

Tickets to tour other popular larger structures—Cliff Palace, Long House, and Balcony House—must be obtained in advance at the Far View Visitor Center (15 miles south of the park entrance). Tour groups are limited in size.

Immediately south of the Visitor Center, a farming complex dates to about 1050. Two large surface pueblos—Far View House and Pipe Shrine House— and smaller settlements make up the complex.

From Mesa Verde’s entrance a two-lane paved road winds upward 2,000 feet through piñon-juniper forests and canyons. At Park Point, on the northern edge of the mesa at 8,600 feet, the visitor is treated to a panoramic view of the Montezuma Valley to the west, and the Mancos Valley, framed by the 14,000-foot San Juan and La Plata mountains to the east.

Near Park Headquarters is the outstanding Chapin Mesa Archaeological Museum. With scores of exhibits and five unique dioramas, the museum provides a comprehensive overview of the area’s ancient people.

Mesa Verde offers great camping just 4 miles inside the park at Morefield Campground. Because there are 267 sites, there’s always plenty of space. The campground rarely fills. But if you want one of the 15 full-hookup sites, reservations are a must.

Our brief visit whetted our appetite for more. In the words of another time traveler from the future…I’ll be back.

(The cowboys’ discovery of Cliff Palace) was the beginning of the mystery which is still a mystery. Who were these people, where did they go, and why?