How hot is hot? 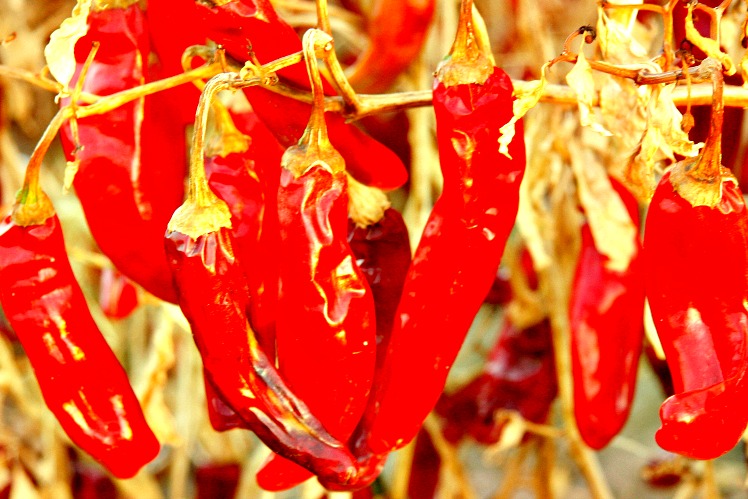 New Mexicans today like their ancestors revere the fiery chile cultivated centuries ago in Pueblo and Hispano communities up and down the Rio Grande from Taos to Vado.

The varieties consumed today trace their lineage to an heirloom variety, the 6-4, bred in 1894 by Fabian Garcia at Las Cruces’ New Mexico College of Agriculture and Mechanic Arts, known today as New Mexico State University (NMSU). His pepper rated 1,786 Scoville Heat Units. Today’s most popular chile varieties—Rio Grande, Sandia and Big Jim—clock in at from 2,500 to 10,000 Scoville Heat Units.

Chile shares the State Vegetable honor with frijoles (pinto beans). The State Question, often heard at restaurants when customers order a dish that includes chile is: “Red or Green?”

Visitors to Las Cruces can enjoy cheeseburgers adorned with chopped or “slabs” of green chile grown locally as well as revered chiles from sacred ground zero in Hatch some 33 miles north.

From sweet bell peppers to spicy jalapeños and the super hot Trinidad Scorpion, chile peppers are popular around the world for their various shapes, sizes, colors, and heat levels. According to New Mexico State University’s Chile Pepper Institute that popularity goes back thousands of years.

Chile peppers have chemical compounds called capsaicinoids. When humans or other mammals eat or even touch capsaicinoids it sends a sensation to the brain that the pepper is hot. In addition to food purposes, capsaicin is used in pain relief patches to relieve muscle aches and pains.

Today, chile peppers are used in a wide variety of cuisine depending on the heat level produced. The bell pepper, or the sweet pepper, has no heat at all. Those can be used fresh in salads or cooked in various dishes. Mild to hot chile peppers include poblanos, New Mexico chile pepper varieties, and jalapeños. Those can be eaten fresh, dried, or cooked and used in traditional Mexican dishes and salsas. Further up the heat scale are tabascos and similar peppers used in hot sauces. Habaneros and chiltepins are considered very hot. Anything above one million Scoville Heat Units including the Bhut Jolokia and the Trinidad Scorpion are considered super hot.

Chile peppers tend to be rich in vitamins A and C and have other nutritional values as well. The purple pigment present in some peppers is produced by anthocyanin, an antioxidant that can help prevent cell damage in the body. Red chile peppers are rich in carotenoids and is considered good for eye health.

Though often categorized as a vegetable, chiles are really a fruit as evidenced by their seeds.

Chile peppers originated in South America and then spread to Central and North America.

The Indians of the American tropics cultivated the chile pepper for centuries for both its culinary and medicinal uses.

On his first voyage to the Western hemisphere, Christopher Columbus mistakenly called the fiery chile pod “pepper” an unrelated spice native to the subcontinent.

All chile peppers are edible even ornamentals. Ornamentals, however, have been bred for their appearance and usually have little to no flavor or can be very hot.

Chile peppers are relatives of tomatoes, potatoes, and eggplants which all belong to the nightshade family.

The color extracted from very red chile pepper pods, oleoresin, is used in everything from lipstick to processed meats.

There are 26 known species of chile pepper five of which are domesticated.