Everything you need to know about Texas BBQ 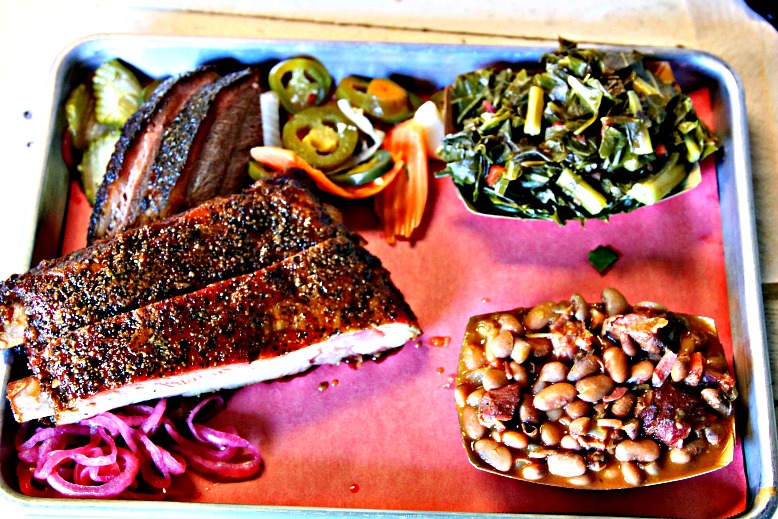 The American barbecue tradition is rooted in numerous ancient practices. Caddo Indians had a method for smoking venison and in the West Indies, natives grilled meats on a frame of green sticks. Indeed the English word barbecue came from the Arawak-Carib word barbracot (via the Spanish word barbacoa).

When European colonists arrived in the New World, no doubt tired of all the salt cod from the long Atlantic passage, they found a local population that roasted fish, birds, corn—pretty much anything at hand. The newcomer’s contribution was to introduce a tasty new animal: the hog.

Not only was this beast a marked improvement over the previous fare, but its own habits proved well suited to the Eastern seaboard. In rural areas and colonial towns, pigs would roam freely, indiscriminately eating trash until someone decided to roast them, which was done in the local manner—a hole in the ground, a fire, and a split hog laid directly above it on a wood frame.

The first recorded mention of American barbecue dates back to 1697 and George Washington mentions attending a “barbicue” in Alexandria, Virginia in 1769.

As the country expanded westwards along the Gulf of Mexico and north along the Mississippi River, barbecue went with it.

Barbecue in its current form grew up in the South, where cooks learned to slow-roast tough cuts of meat over fire pits to make them tender. This Caribbean style of slow cooking meat formed the basis of the Southern barbecue tradition that influenced Texas when some of its first American settlers arrived.

European meat smoking traditions were brought by German and Czech settlers in Central Texas during the mid-19th century. The original tradition was that butchers would smoke leftover meat that had not been sold so that it could be stored and saved. As these smoked leftovers became popular, many of these former meat markets evolved to specialize in these smoked meats.

The barbecue is typically served with plenty of thick sauce (either slathered on the meat or on the side for dipping or both), and then sides of coleslaw, potato salad, pinto beans, and fat slabs of white bread.

If you want to sink your teeth into excellent brisket then head to Lockhart, the official Barbecue Capital of Texas. The small town is home to four major barbecue restaurants: Black’s Barbecue, which has been owned by the same family since 1932; Chisholm Trail Bar-B-Que; Smitty’s Market; and Kreuz Market (pronounced Krites).

Heavy on the pepper, the snappy beef-and-pork sausage at Kreuz Market is truly one of the best in Barbecueland. The pork spareribs taste fresh, with plenty of juicy, delicious meat on them, and the beef ribs are scrumptious.

Only the uninitiated use the front door at Smitty’s Market. You’ll enter the boxy brick building from the parking lot passing the waist-high brick pits and peruse the list of post oak–smoked meats—brisket, pork ribs and chops, shoulder clod, sausage, and prime rib. Salivating, you place your order for a pound or so of meat. May this bulwark of tradition never change.

Instead of a mesmerizing encounter with a picturesque fire blazing at the end of an ancient brick pit like you’ll find at Smitty’s, at Black’s you’re funneled through a narrow corridor past a salad bar. When you finally reach the meat counter, you’ll find great brisket, enormous beef short ribs, pork ribs, pork chops, smoked turkey breast, and Black’s signature sausage (90 percent beef, 10 percent pork) with phenomenal flavor.

Heading south on Highway 183, the City Market in Luling is just 15 miles away. Admired as one of the best barbecue places in Texas, City Market offers brisket, sausage links, and pork ribs. They also offer pinto beans and a homemade mustard-based sauce which is out-of-this-world.

While in Brenham (think, Blue Bell ice cream) I decided to check out a rising star, Truth BBQ on the west side of town. Truth looks too cute to be serving serious barbecue. The carefully curated interior—with its hand-lettered signs, Texas license plates, and Instagram-ready desserts—is a far cry from a no-frills meat market or a rusty roadside pit. Walking in we’re offered samples of brisket and a delicious side. The first bite announces the fact that youthful proprietor Leonard Botello IV has been an admirer of the handiwork of other masters of the craft, notably Franklin Barbecue’s Aaron Franklin.

The pork ribs are decadently moist and slightly sweetened with a glaze. The brisket possesses an intense meaty flavor, subtle but deep smoke penetration and a fine black-pepper crust. With every bite I liked my visit more. And the sides—can we talk about the sides? There is creamy mac and cheese with sizzling bacon crumbled on top; slow-cooked collard greens; rapturously buttery corn pudding; and bright, crisp slaw.

Somehow you must leave room for one of Truth’s five or so different monster cakes, which Botello’s mother, Janel, makes from scratch. And on the way out the “Love Texas” sign makes a perfect background for selfies. Truth BBQ is the real deal, get out there the next chance you can. If you don’t believe me, they have a 5 star rating on Yelp and Trip Advisor.

On a trip to the Coastal Bend we checked out Mumphord’s Place BBQ in Victoria and it did not disappoint. The minute we parked, I was drawn to the action out back where the pit master tends the glowing fireboxes and pits in the screened-in shed. This is “cowboy-style” barbecue, where the wood is burned to coals, then transferred to large metal pits in which the meat is placed on grates set about four feet directly above the heat.

The flavor is good, and in a part of the state where quality ’cue of any kind is scarce, Mumphord’s does a better than decent job. Part of the fun is being there, in the room with its red-checked tablecloths, sports photos, trophies, cow skulls, an ancient icebox, a sword, old firearms and cameras, beer cans, and heaven knows what else.

You don’t need no teeth to eat my beef.

—from Legends of Texas BBQ