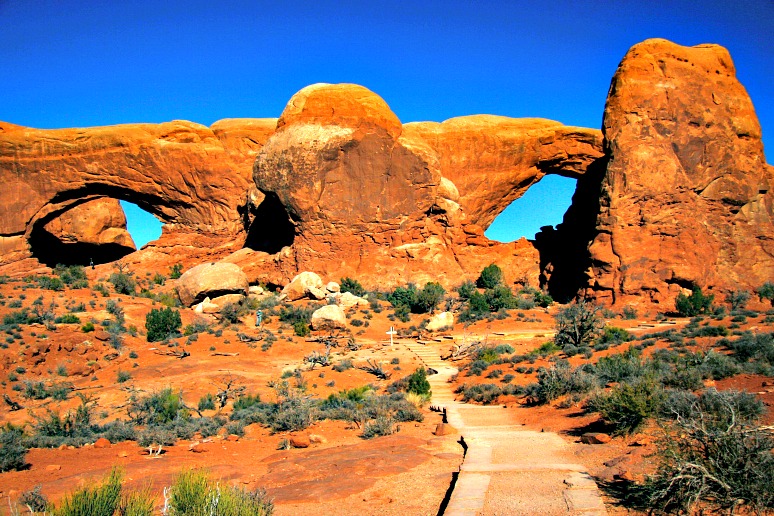 Geology may sound boring on the surface but when you gaze your eyes on these incredible rock formations, you will find them anything but dull. Passionate rock lovers from around the world plan vacations to see some of the country’s strangest landscapes.

Many of the most spectacular formations are in the West where the mountains and canyons are younger and haven’t been softened by erosion and age. These craggy profiles and volcanic monoliths have intrigued humans for millennia.

Rock on with these six unusual rock formations below from Arches National Park to the Texas Hill Country.

Monument Valley in Arizona and Utah

Providing a dramatic craggy backdrop for many a cinematic Western movie, Monument Valley runs along the border of Utah and Arizona within the 26,000-square miles of the Navajo Tribal Park. U.S. Highway 163 scenic byway barrels through red rock buttes and spires.

The names of the formations offer lots of Wild West flavor: Grey Whiskers, the Totem Pole, the Sentinel, and the matching Left and Right Mitten Buttes which the Navajo believe represent the hands of the Creator. Director John Ford shot seven westerns here most starring John Wayne including The Searchers (1956) with the landscape playing a featured role. There’s even has a spot in the valley named after him: John Ford’s Point.

You’ll find spectacular red rock buttes like those surrounding Sedona scattered throughout the Southwest but these particular rocks have something that sets them apart: mystical vortexes. Even if you’re not an adherent of the New Age movement, plan on visiting at least one of Sedona’s famous vortexes. They’re at some of the most gorgeous spots around town.

Rising 200 feet above the valley floor, this massive sandstone bluff was a welcome landmark for weary travelers. A reliable year-round source of drinking water at its base made El Morro a popular campsite in this otherwise rather arid and desolate country.

At the base of the bluff—often called Inscription Rock—on sheltered smooth slabs of stone are seven centuries of inscriptions covering human interaction with this spot. This massive mesa point forms a striking landmark. In fact, El Morro means “the headland.”

Round as a giant Easter egg, Enchanted Rock sits half-buried in the hills north of Fredericksburg. It’s a half-mile hike to the top but an unforgettable experience. The massive pink granite dome rises 425 feet above the base elevation of the park. Its high point is 1,825 feet above sea level and the entire dome covers 640 acres. Climbing the Rock is like climbing the stairs of a 30- to 40-story building.

One billion years ago, this granite was part of a large pool of magma or hot liquid rock, perhaps seven miles below the earth’s surface. It pushed up into the rock above in places, then cooled and hardened very slowly turning into granite. Over time, the surface rock and soil wore away. Those pushed-up areas are the domes you see in the park. The domes are a small and visible part of a huge underground area of granite, called a batholith. The Enchanted Rock Batholith stretches 62 square miles; most of it is underground.

The Hoodoos of Bryce Canyon, Utah

These knobby, colorful columns of red rock are just as weird as their name: hoodoos. The word hoodoo means to bewitch which is what Bryce Canyon’s rock formations surely do.

The hoodoos we are talking about are tall skinny shafts of rock that protrude from the bottom of arid basins. Hoodoos are most commonly found in the High Plateaus region of the Colorado Plateau and in the Badlands regions of the Northern Great Plains. While hoodoos are scattered throughout these areas, nowhere in the world are they as abundant as in the northern section of Bryce Canyon National Park. At Bryce Canyon, hoodoos range in size from that of a human, to heights exceeding a 10-story building.

The largest arch on the planet, Landscape is rightfully famous. It is amazingly thin, delicate-looking, and photogenic. Landscape is an awesome sight; the amazing width of the stone arch, held in place by such a delicate, slender center. Only a few years ago, a short spur trail passed directly underneath the arch. Because of recent rock falls from the underside of the arch, visitors are no longer allowed to travel underneath the fragile-looking rock span.

Mystery creates wonder and wonder is the basis of man’s desire to understand.