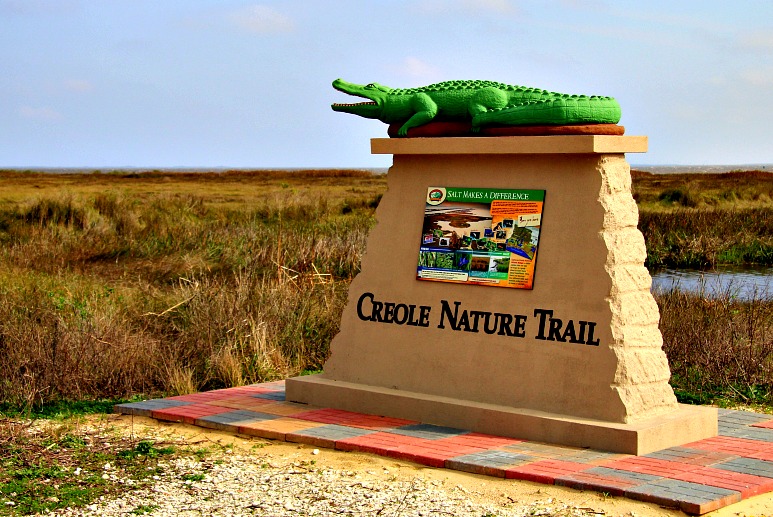 Part of America’s Byway’s system, the Creole Nature Trail is known for its distinct waters, pristine blue skies, and stops along the drive adorned with plenty of wildlife and bird watching that can either fill an entire weekend, or simply a day trip. Featuring stops of picturesque landscapes beyond transcription, the Creole Nature Trail, an All American Road, sees hundreds of thousands of visitors annually, all passing through this delicate ecosystem.

The marshland, bayous, prairies, and coastal shores along the Gulf of Mexico teem with wildlife including alligators and birds. These lands and waters support 28 species of mammals, more than 400 species of birds, millions of monarch butterflies, 35 species of amphibians and reptiles, and 132 species of fish.

We used A+ Motel & RV Park in Sulphur as our home base while driving the Creole Nature Trail and exploring the area. New in 2008, A+ is big rig friendly with 28 pull-through and back-in sites and conveniently located 30/50-amp electric service, water, and sewer connections, and cable TV.

While there are five entrances to the Creole Nature Trail, the most popular entrances are off I-10 in Sulphur (Exit 20) and just east of Lake Charles at Louisiana Highway 397 (Exit 36).

The trail loops through 180 miles of bayous and marshlands and along the shore of the Gulf of Mexico before once again heading north. The remaining entrances are located on Louisiana Highway 82 at the Texas state line in the west and the Vermilion Parish line on the east; exit 36 from Interstate 10; and exit 6A on I-210 just north of the Lake Charles Regional Airport on Louisiana Highway 385.

Although the Creole Nature Trail is primarily a driving route, there are numerous stops where you can take advantage of a nature walk. Each of these excursion areas provides excellent wildlife and birding photography opportunities.

Sabine National Wildlife Refuge was established in 1937 and is the largest coastal marsh refuge on the Gulf of Mexico. The primary management objective of the refuge is to preserve a large area of coastal wetlands for wintering and migrating waterfowl from both the Mississippi and Central Flyways. This refuge is a major nursery area for many estuarine-dependent marine species as well as home to alligators and other reptiles, mammals, and numerous wading, water, and marsh birds.

Numerous recreational opportunities are available year round. Hiking, wildlife observation, and photography are popular at the Wetland Walkway and Blue Goose Trail. The Wetland Walkway is a 1.5 mile walking trail including a section of boardwalk across a freshwater marsh, an observation tower with viewing scopes, five trail rest shelters with benches, interpretive signs, and a restroom facility.

The Blue Goose Trail is a one mile foot path that leads through a brackish marsh community to the edge of Calcasieu Lake. The area includes an observation tower, restroom, and numerous interpretive signs about the area.

On your next adventure out, consider a scenic drive on the Creole Nature Trail; you never know what may be waiting to be seen.