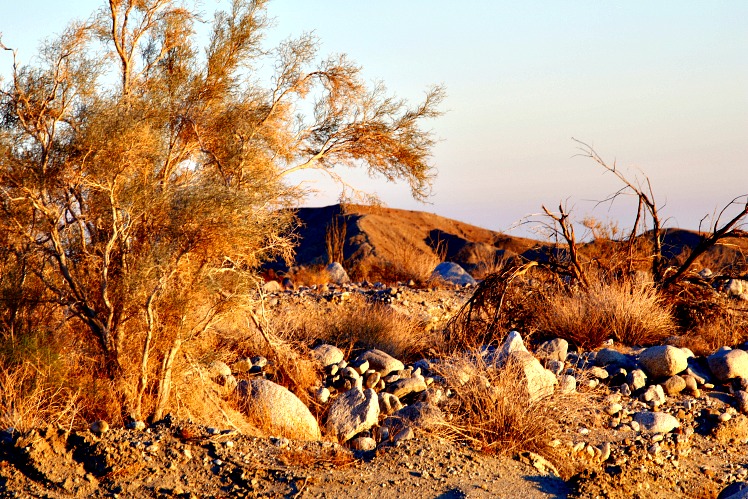 Anza-Borrego was named for a Spanish explorer and an animal inhabitant. It was through Borrego Valley that Juan Bautista de Anza discovered the first land route to California. This happened five years after Father Junípero Serra had founded the first mission in San Diego.

In 1774 Anza led a party of explorers from Arizona south into Mexico and up along the Colorado River, then finally north across a dead sea into California and the Borrego Valley. Coyote Canyon, at the north end of the valley, provided a natural staircase over the mountains.

One of the park’s year-round residents is the desert bighorn sheep. The word “borrego” is Spanish for sheep.

The largest state park in the contiguous United States, Anza-Borrego is flanked by rugged mountains on three sides and the Salton Sea to the east. Its 650,000 acres contain spectacular desert vistas, a variety of plant and animal life, and numerous archaeological, cultural, and historic sites.

Lush oases with graceful palm trees lie hidden in valleys where water bubbles close to the surface. A multitude of birds shelter beneath the long frond skirts hanging from the palms, and a few rare desert bighorn sheep roam the rocky mountain slopes. Coyotes fill the night with their laughing song and mountain lions prowl the high country. Two-thirds of Anza-Borrego remain pristine wilderness.

Anza-Borrego’s historical roots run deep. Within the park’s boundaries are portions of the southern route to the California gold rush, the Butterfield Overland Mail Route, and the Southern Emigrant Trail.

Situated northeast of San Diego and south of the Palm Springs/Indio area, Anza-Borrego is easily accessible from anywhere in Southern California. Our journey took us south of Indio on State Highway 86 (which skirts the western shore of the Salton Sea) before we veered west on S22 (Borrego Salton Seaway) which dissects the park. A few miles down the road, we encountered thick stands of ocotillo.

A considerable diversity of terrain and vegetation awes the visitor. Eroded badlands sprawl at near sea-level elevation and piñon-juniper woodlands cover 6,000-foot-high mountains. The park is a fascinating nature reserve with over 1,000 species of plants amid a great diversity of terrain.

To reach the Anza-Borrego Desert State Park Visitor Center, drive northeast through the tiny town of Borrego Springs. When you first approach the visitor center you may not see anything except the sign, but look closely. The center is built into the earth—be a desert ground squirrel and burrow deeply into the attractive chambers for a bounty of desert touring information. Exhibits include a film of an actual earthquake experience as it occurred in the desert here, live pupfish, desert stones to touch, and temperature gauges.

Flora, fauna, and wildlife you might see near the visitor center are ocotillo, cholla, desert bighorn sheep, roadrunners, black-tailed jackrabbits, and several species of hummingbirds.

At first glance, the desert can seem like an inhospitable place, which makes Anza-Borrego’s wildflower bloom seem all the more miraculous. The park’s more than 200 flowering plant species put on a brilliant display each spring—if winter rains have worked their magic.

Typically the bloom occurs between late February and April, with early March being the safest bet. Once the bloom starts, it lasts only for a few weeks.

If you have a 4WD, scope out the sand verbena and dune evening primrose along what’s commonly called Coyote Canyon Jeep Trail, a dirt road at the north end of DiGiorgio Road.

There are more stories to tell about some of the other interesting places in this area. Watch this space.