Located in the ‘heart’ of Arizona, the Verde Valley is ideally situated above the heat of the desert and below the cold of Arizona’s high country 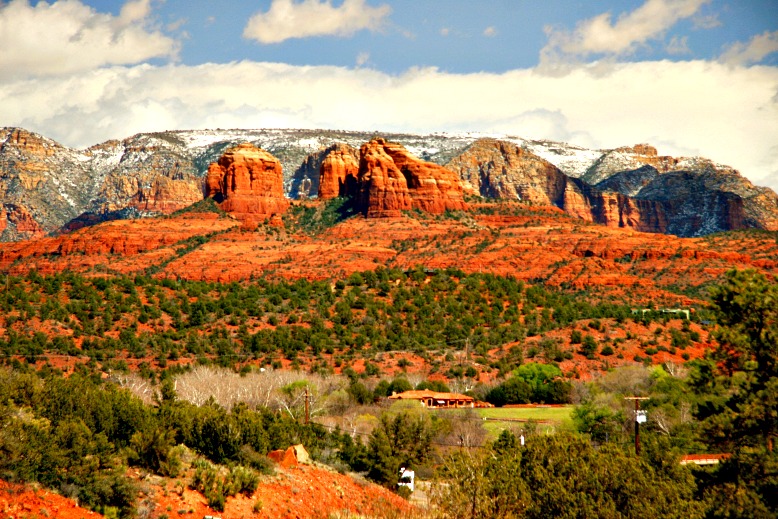 Everyone knows that Arizona is the Grand Canyon State. But we came in search of other riches: the beautiful red rocks of Sedona, the quirkiness of an old mining town, and the mysteries of stone left by those who once thrived here but have now vanished. We found all this and more as we toured Verde Valley, 90 miles north of Phoenix.

Montezuma’s Castle, near Camp Verde, has nothing to do with Montezuma, nor is it a castle. We owe the name to early settlers who thought this five story pueblo was of Aztec origin. In fact, the superb masons who constructed this cliff-clinging citadel were likely ancestors of the present day Hopi and Zuni. Spanish explorers called them Sinagua (“without water”) because they were dry farmers, coaxing their crops of corn, beans, and squash from the arid desert soil.

The little oasis below the pueblo is an exception, a pleasant place to stop and have a picnic by the creek under the shade of white-barked Arizona sycamores.

Nearby, a natural limestone sinkhole filled with water has created Montezuma Well. The Indians who lived here centuries ago engineered an elaborate irrigation system to divert water from the spring-filled well to their fields. Ditches and ruins were visible as we hiked along the well’s trail.

Camp Verde, the oldest community in the Verde Valley, was established in 1865 as a cavalry outpost to protect the settlers from Indian raids. The old fort in the middle of town is now Fort Verde State Historic Park. Exhibits in the headquarters building explain the history of 19th-century soldiering in central Arizona.

From Camp Verde we headed northwest on State Route 260 through Cottonwood. In the 1920s, Cottonwood was known for having the best bootlegging booze for hundreds of miles. The town has settled down since, with the Old Town section working to regain some of its picturesque quality.

What rogues lived hereabouts! Bootleggers below and up the mountain of the “wickedest town in the West”. That’s mile-high Jerome, once home to the biggest copper mine in Arizona and boasting 15,000 people before it busted. The mine closed in 1953 but the town is decidedly open as a tourist magnet and arts community. Friendly folks here, all 450 of them.

Jerome is like one of those old houses built without an architect, full of twists and turns and unexpected finds. It’s a magical jumble of a town and conveys a free and easy atmosphere. Maybe it’s the breathtaking views across the Verde Valley all the way to the red rocks of Sedona and the distant San Francisco peaks. There are enough oddity shops, galleries, watering holes, ice cream parlors, and crooked buildings fronting narrow streets to fill a charming day. Visit the Douglas Mining Museum to learn the history of the area.

Down the hill from Jerome is Clarkdale, an old copper mining company town now best known for the Verde Canyon Wilderness Train that takes you on a four hour tour of the stunning Verde River Canyon.

Nearby Tuzigoot National Monument is the next stop. Tuzigoot—Apache for “crooked water”—is such fun to say, you’ll want to stop there for the name alone. Over 77 rooms once buzzed with life in this beehive of a hillside pueblo, their Sinagua occupants farmed by the river below.

The red rock country of Sedona lures photographers, artists, hikers, and nature lovers. Sedona, an art colony and resort, has served as a base for more than 80 movies and TV productions. Traveling through sagebrush country toward Sedona, the earth began to change color from white to orange to red. Erosion-carved buttes created brilliant red temples against the dark blue skies.

In 1950 the surrealist painter Max Ernst moved to Sedona; it was the beginning of the town’s reputation as a haven for artists. No wonder—the surrounding red rock spires and buttes trimmed with deep green pine stands fill the eye with vibrant sculpture. Around sunset take the Red Rock Loop to Crescent Moon Ranch State Park to watch Cathedral Rock’s red turrets deepen and flame in the ember light. For more red rock splendor, drive down to the aptly named Bell Rock. You can take a short hike to the rock and see if your intuition leads you to the vortex (energy emanating from the earth) that locals say exists there. On the way back, stop to see the Chapel of the Holy Cross nestled securely between two rock spires.

When you can pull yourself away from gawking at the scenery you’ll discover so much to do in Sedona that you’ll wonder where to begin. Browse the galleries. See the Sedona Art Center where live exhibitions of working artists are common. Stroll Tlaquepaque, the village modeled after a suburb of Guadalajara, Mexico. Among the enchanting archways and courtyards with lilting fountains you’ll find shops, galleries, and restaurants, as well as special events.