From the legacy of ancient peoples to Colonial times 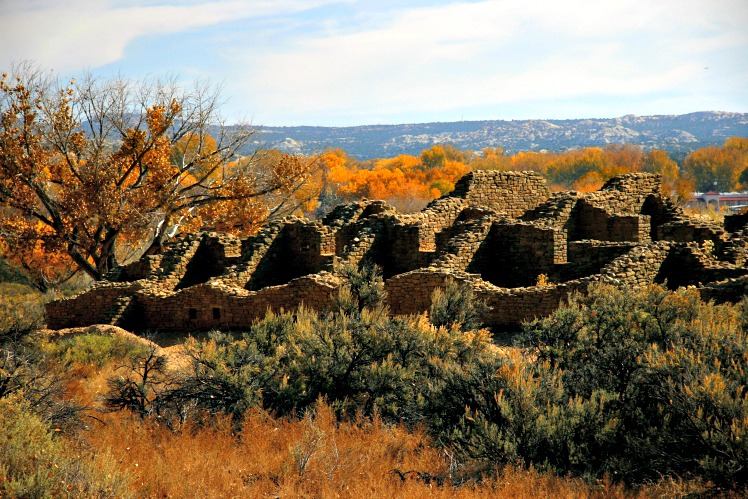 “National monument” is a rather confusing designation. We most likely know what we’re getting into with a national memorial or a national battlefield but the monuments are rarely the statues or shrines their titles suggest. Most, in fact, are sprawling natural wonders that give national parks a run for their money. In fact, many do become national parks.

Still, several of the 128 national monuments actually deliver on their promise to commemorate and preserve history. Some are the sites that recognize Native American history and preserve ancient pueblos. They encompass celebration, cautionary tales, and hope. These are the national monuments where we can stop to reflect on the past as we look forward into the future with hope.

Pueblo people describe this site as part of their migration journey. Aztec Ruins National Monument provides visitors an opportunity to explore ancient ruins built by the ancient Ancestral Puebloans in the 1100s. Aztec Ruins features ceremonial, public, and storage structures as well as the “Great Kiva”, the oldest and largest reconstructed Kiva in North America. The Great Kiva is a 40-foot diameter semi-subterranean structure which was the central religious site of the complex. Take a self-guided tour and explore the 900-year old ancestral Pueblo Great House of over 400 masonry rooms. Look up and see original timbers holding up the roof.

Step into the mysteries of history. At the Casa Grande Ruins National Monument, you’ll find the Ancient Sonoran Desert People’s farming community including the preserved “Great House,” or “Casa Grande.” An estimation of dating puts the origins of this structure around 1350 and the abandonment thereof about a century later in 1450. It wasn’t until 1694 that written historic accounts were journaled by Padre Eusebio Francisco Kino. Other explorers, philanthropists, anthropologists, and politicians banded together over the years to research, restore, and preserve the Great House. It was America’s first archaeological reserve in 1892 and declared a National Monument in 1918. Today, visitors can explore the extensive and fascinating compound with the help of guided tours and an interpretive center that offers answers to questions and leaves you to ponder a few more questions yet to be solved.

Three years after founding Georgia in 1733, Gen. James Edward Oglethorpe established Fort Frederica to defend the fledgling colony against Spanish attack from Florida. The site, sixty miles south of Savannah, would become the military headquarters for the new colony. Fort Frederica combined a military installation (the fort) with a settlement (the town of Frederica). Georgia’s fate was decided in 1742 when Spanish and British forces clashed on St. Simons Island. Fort Frederica’s troops defeated the Spanish ensuring Georgia’s future as a British colony. By 1743, nearly 1,000 people lived at Frederica. The peace treaty that Great Britain and Spain signed in 1748 sounded its death knell. No longer needed to guard against Spanish attack, the garrison was withdrawn and disbanded. Today, the archeological remnants of Frederica are protected by the National Park Service.

Explore a variety of structures including multistory towers perched on canyon rims and balanced on boulders. Human habitation at Hovenweep dates to over 10,000 years ago when nomadic Paleoindians visited the Cajon Mesa to gather food and hunt game. By about A.D. 900, people started to settle at Hovenweep, planting and harvesting crops along the top of the mesa. By the late 1200s, the Hovenweep area was home to over 2,500 people. Most of the structures at Hovenweep were built between A.D. 1200 and 1300. There is quite a variety of shapes and sizes, including square and circular towers, D-shaped dwellings, and many kivas. The masonry at Hovenweep is as skillful as it is beautiful. Some structures built on irregular boulders remain standing after more than 700 years. Though the reason is unclear, ancestral Puebloans throughout the area migrated south to the Rio Grande Valley in New Mexico and the Little Colorado River Basin in Arizona. Today’s Pueblo, Zuni, and Hopi people are descendants of this culture.

Discover this historic five-story Native American dwelling carved out of an ancient limestone cliff with twenty rooms. Begun during the twelfth century, it took about three centuries to complete. Montezuma Castle National Monument, considered one of Arizona’s best-preserved cliff dwellings, was built by a group connected to the Hohokam people of Southern Arizona. Explore the museum and wander the trails through a picturesque sycamore grove at the base of towering limestone cliffs. Afterwards you are able to have lunch in the picnic area along the shore of Beaver Creek.

Explore the legacy of ancient peoples in a desert hilltop pueblo. Discover endless views of varying desert habitats and learn about the Sinaguan people at the museum. Starting in A.D. 1000, the Sinagua built the 110-room Tuzigoot pueblo including second and third story structures. The tribe was largely agricultural and had trade routes that spanned hundreds of miles. These ancient peoples left the area around 1400. The museum features exhibits depicting the lifestyle of the Sinaguan Indians as well as an impressive collection of artifacts collected from the pueblo and nearby sites. A self-guided, 1/3-mile loop trail traces through the pueblo. The hilltop view offers expansive scenery of the Verde River and Tavasci Marsh.

I have decided to stick with love. Hate is too great a burden to bear.