Laughlin is a more relaxed Las Vegas. They’ve created a niche with Nevada-style gaming, but without the high-speed lifestyle of the Las Vegas Strip. 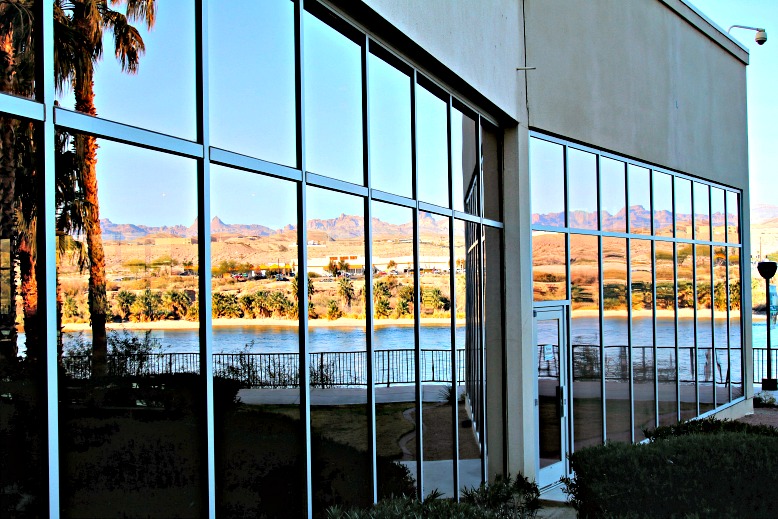 While flying his plane over the Colorado River in 1964, Don Laughlin saw a world of potential in a strip of Nevada land across the river from Arizona’s Bullhead City. At the time the area was home to less than a thousand people. He took a big risk invested it into an old boarded-up eight-room motel. From there, success took over.

That motel added casino games and eventually evolved into the Riverside Resort with two massive towers. The town itself—about a 90-minute drive from Las Vegas—became official when postal services were established.

Don Laughlin is still going strong at 88 years and living in a penthouse at the top of his resort. The town that shares his name is now home to nine casino hotels, 10 if you include the Avi Resort about 15 miles south on Native American land.

Laughlin’s population is approximately 10,000 while Bullhead City and its unincorporated area boast a population of about 42,000 permanent residents. An estimated 14,000 Nevada and Arizona residents currently work in Laughlin’s hotels and casinos. Multi-million dollar Laughlin housing developments have rushed into construction to keep pace with the business boom.

Stretch your legs while exploring Laughlin on foot at the Riverwalk. Well maintained and offering fantastic views of the city and the Colorado River, the Laughlin Riverwalk is a great way to get from one casino to the other while soaking up sights like Don Laughlin’s Riverside to the boats sailing by.

The coolest way to get around town is by water taxi. These small boats, piloted by certified captains, zip around on the river from one property to another. Most casinos have their own dock and if you stand around on one, a water taxi will show up fairly quick. A single ride is $5, although wristband deals are available for unlimited rides.

If someone directs you to anything described as a “nightclub,” be warned it won’t be anything like Vegas. They’re mostly lounges with live bands and line dancing. Bikini Bay Bar & Nightclub is really a sports bar with pool tables and drinks served by girls in bikinis who dance on countertops. It’s probably the closest thing you’ll find to a strip club in Laughlin—and oddly enough, it’s at the outlet mall.

One local gem is Losers’ Lounge, a two-level drinking spot where the walls are decorated with framed photos of “losers” throughout history like OJ Simpson and Tonya Harding. The gallery stays surprisingly up to date—recent additions include Bill Cosby and Lori Loughlin.

No trip to Laughlin is complete without a detour to Oatman, a Route 66 ghost town in Arizona that has become a bit more touristy over the years. The new escape room at the local jail is fun. But be sure to visit the Oatman Hotel for lunch. The restaurant has buffalo burgers and the walls (and even parts of the ceiling) are covered with dollar bills.

But the real draw is the burros roaming Oatman whose ancestors were brought in to work during the mining days. A few unwritten rules to follow: first—burros and dogs don’t mix. Second—don’t feed the burros carrots, which are high in sugar and do a number on the digestive tract. You’re more than welcome to feed them alfalfa squares, sold in bags for a dollar. Finally—when the burros are in the middle of the road (which they frequently are), they have the right of way. Cars have to wait, no matter how long it takes. No honking, revving engines, or doing anything else to encourage them to move along. The burros own the town!

For another out-of-town excursion, Jet Boat tours travel nearly 60 miles down the river from Laughlin to Lake Havasu. You can hang out in the town for a few hours and check out London Bridge, a historic structure that actually spanned the River Thames and was brought over brick by brick. Along the way, the boat travels past the California town of Needles, the Havasu National Wildlife Refuge, and vantage points that can only be seen from the water, including petroglyphs in Topock Gorge.

And if you’re looking for a selfie station take a photo with River Rick. Or at the Losers’ Lounge. Or at any one of the other gems in Don Laughlin’s little resort town.

The road is there, it will always be there. You just have to decide when to take it.